Erryn reviews ‘Let Me In’ (The Boys Club Book 1) by Luna David. The ebook was published March 28, 2018. A copy was provided in exchange for an honest review.

Why I read this book: I have been reading a lot of Daddy Kink and this one called to me. 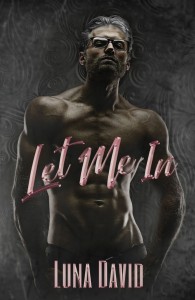 Twenty-year-old Liam Cavanagh works three dead-end-jobs to take care of his family. He’s been the sole breadwinner since he was fifteen and yearns for a life of his own. Forced to grow up too fast, he carries the burdens of responsibilities that shouldn’t be his, and it’s slowly destroying him. The more he tries to control, the more out of control he feels.

When he gets a hit on a personal ad he placed on The Boys Club app, he shrugs it off as impossible. With nearly 600 miles between him and “Boston Daddy” he knew the odds were against them. Until Boston Daddy’s current boy convinces him otherwise and persuades Liam to take on the role of Daddy’s new boy.

Saying forty-year-old entrepreneur Cash Moreau is having a bad week is an understatement. The man he’s been with for years leaves him for a new job, his own company is in crisis, and to top it all off, a young stranger shows up on his doorstep with all his worldly possessions, claiming to be his new boy. Liam wants a Daddy to depend on, and Cash refuses to believe he’s what’s best for Liam.

Despite their powerful connection, Cash finally pushes Liam away, and the beautiful boy who stole his heart disappears. Soon, Cash realizes what he’s let slip through his fingers. The elusive thing he’s been searching for is Liam, it’s only ever been Liam, and suddenly Cash will move heaven and earth to find what he’s lost. Will he find his boy in time to make things right, or is it too late to let him in?

I have mixed feelings about this book.  I wanted to like it.  Heck, I wanted to love it.  I’ve read a number of Daddy Kink books recently and this one sounded perfect.  I was excited to grab a copy.  And the cover?  Well, it certainly caught my attention.

As I’ve reflected, I’ve tried to pin down why I’m ambiguous about the book.  It had relatable and fallible characters, a fair bit of angst, and a happy ending.

I also cried, which is always a bonus.

The crying, though, was near the beginning of the book.  Most of the angst was early in the book.  After about the halfway mark…I almost lost interest.  I stuck with it, of course, because I wanted to be sure Daddy Cash and Liam got their happy ending.  The book doesn’t follow a traditional romance structure in that the dark moment was not at the 75% mark.  Not even close.  Everything felt resolved early on. I kept waiting for something else to tear them apart, to make me doubt their feelings for each other, but I never did.

There was drama, for sure, but I didn’t feel connected to it.  It felt like I was being given a series of events rather than being pulled into the story of these two men.  It seemed like telling, not showing.  There was chemistry, but there were so many other events that the relationship was secondary.  The sex scenes were nice, and Cash’s tenderness to Liam was exquisite, but I never had a moment where I went, ‘hey, they are SO meant to be together’.  Psychological reasons were provided why both men were the way they were, but it felt inauthentic.

I loved CC as well as many of the secondary characters, but some of the time setting up future books would have been better spent on these two men in THIS moment.  There was barely any Daddy/boy interaction on the page.  A character would reflect then time had gone by and they had or had not done role play.  I am not saying I need sex on every page, but the one truly memorable scene was when Liam was listing the rules to Cash, enacting each of them.  I wanted more of that kind of interaction.

Liam says to Cash, “I want to be your boy twenty-four seven.  I need you to take me in hand.  I want… I need strict rules regarding my behavior when I’m with you and when I’m not.  When I’m at work, out with friends, or when I’m alone, I want to know what you expect of me, every moment of the day.  I’ve been feeling so lost and so out of control for so many years, forced to mature faster than was good for me, and even before that, I never had a regular childhood.”

I was proud for Liam, to lay it all on the line like that.  Cash responds with “I’ll make sure that changes immediately, but that also means I will be much stricter with you.  You will have a curfew, you will have very strict rules regarding what you can and cannot do when you are not with me.”

Again, it sounds great.  But those interactions are never shown.  Maybe it was because Liam was such a good boy in comparison to Cash’s previous boy Tommy, who was such a brat.  I understood Liam’s desire to be coddled, but there was nothing beyond that.  Everything just seemed to fall into place and except for one moment of external crisis that did not imperil the relationship, nothing happened.

I don’t want you to think this isn’t a book worth reading, because it is.  I did enjoy the book.  I guess I was hoping to be challenged.  I like to root for characters, especially flawed ones.  Liam is pretty much perfect and Cash’s one true flaw is quickly overcome.  I needed more.  More conflict, more drama, more to care about.

It is still a great book with a wonderful love story and just enough clues about the next book to have me intrigued. 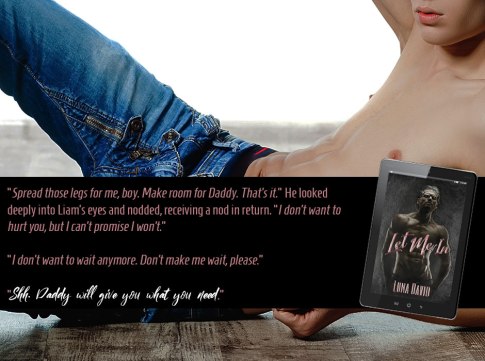 Three hours later, he felt Liam stir and glanced over to see him stretch, look at the clock, and grimace. “Sorry I slept so long. Thought I’d just be out for an hour at most.”

Cash squeezed Liam’s thigh and smiled when the boy moved to cover his hand and give it a squeeze in return. Cash pulled off the freeway at the next exit, headed towards a chain restaurant he figured was better than a fast food joint, and pulled into the parking lot. He squeezed Liam’s leg again, unhooked his seatbelt and kissed him softly on the lips, whispering, “Stay right where you are.”

Liam did as he was told, and Cash walked around the car to open his door and help him out. He clasped Liam’s hand and made to turn to lead them to the restaurant’s entrance, but he was stopped when Liam didn’t budge. Turning, a questioning look in his eyes, Cash met Liam’s gaze, saw his rosy cheeks and moved back towards him. He leaned back against the car door and slid his finger in one of Cash’s belt loops, tugging him flush against his body.

Cash slid his arm around Liam’s back and smiled down a him. Liam’s flirtatious smile and sparkling eyes made his smile grow wider. “What is it, boy?”

Cash couldn’t fully read Liam yet, so he didn’t want to step on his toes, if the boy didn’t like it. “You don’t have to, if you don’t want—”

He stopped when Liam lifted his fingers to his lips to shush him. The boy was adorable when he smiled shyly up and him, and when he said, “Does Daddy want me to wait for him to come help me out of the car?”Cash nearly groaned out loud and pressed his hips into Liam’s so he’d feel what Liam had done to him.

Liam looked deeply into his eyes, lifted his hands and scratched them through Cash’s beard. Cash couldn’t keep his hips from grinding into Liam’s again. Damn, but the boy was full of surprises. Liam licked his lips and asked, “Are you always going to take such good care of me?”

Liam nodded as if his answer had been expected then whispered, “How am I ever going to be able to thank you for being so good to me?”

Cash couldn’t keep the Cheshire grin off his face when he nearly growled, “I’m sure I can come up with something.”

Liam licked his lips and said, “I hope so.”And pushed against Cash’s body enough to have him moving back. Liam clasped his hand and looked up at him when he asked, “Can I get a milkshake, Daddy?”

Cash chuckled and nodded. “Yeah, I think you deserve one. Come on. Let’s fatten you up a bit, shall we?” 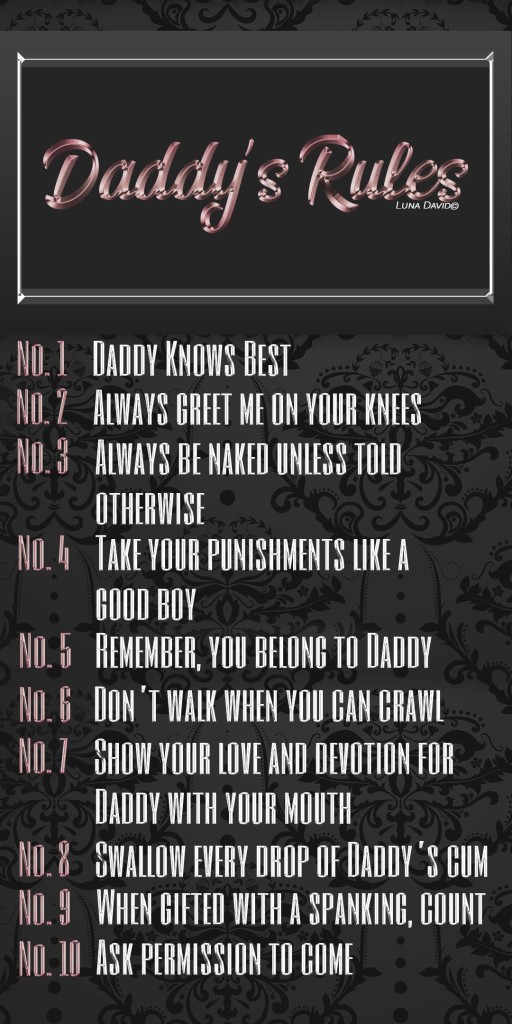 Luna David is a true romantic at heart who was fortunate enough to find and marry her soul mate. Most of the time she considers herself lucky to have been blessed with having twins, but they’re giving her a run for her money. She’s a stay at home mom and an author, so when she’s not begging her little monsters to behave, you’ll most likely find her writing.

She loves anything book, coffee or dark chocolate related and can’t think of a better way to pass the time than to combine all three. She reads romance novels voraciously and while she prefers contemporary romantic suspense with strong Alpha males finding their soul mates, she’s a sucker for any romantic story, regardless of genre.