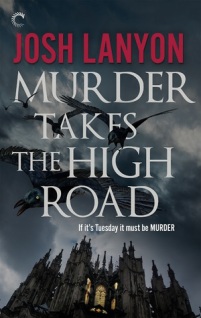 From award-winning male/male author Josh Lanyon: a librarian finds himself in a plot right out of one of his favorite mystery novels

Librarian Carter Matheson is determined to enjoy himself on a Scottish bus tour for fans of mystery author Dame Vanessa Rayburn. Sure, his ex, Trevor, will also be on the trip with his new boyfriend, leaving Carter to share a room with a stranger, but he can’t pass up a chance to meet his favorite author.

Carter’s roommate turns out to be John Knight, a figure as mysterious as any character from Vanessa’s books. His strange affect and nighttime wanderings make Carter suspicious. When a fellow traveler’s death sparks rumors of foul play, Carter is left wondering if there’s anyone on the tour he can trust.

Drawn into the intrigue, Carter searches for answers, trying to fend off his growing attraction toward John. As unexplained tragedies continue, the whole tour must face the fact that there may be a murderer in their midst—but who?

A complimentary copy was provided by the publisher via NetGalley in exchange for an honest review.

Why Melissa read this book: I am a HUGE Josh Lanyon fan and want to read everything she writes.

Why Dana read this book: Ditto to what Melissa said. I am a huge fan of Josh Lanyon’s books and I jumped at the chance to duo review this book.

Murder Takes the High Road is different from Lanyon’s previous works. The beginning started off very slow for me and things didn’t really pick up/get interesting until around the 25% mark. Is it wrong for me to say that I enjoyed seeing Carter being upset and miserable because of Trevor and Vance (Trevor is Carter’s ex and Vance is the new BF)? I hated Trevor and Vance, and the drama and upset they caused Carter (and several other people of the tour) was disturbing but so over the top that I couldn’t help but be amused by it. How could two people be so selfish and self-absorbed that they couldn’t see that Carter was just trying to thumb his nose at them by being on the tour? Poor Carter. He is well rid of Trevor.

The relationship between John and Carter was nice. They didn’t exactly jump into a relationship (they wait to sleep together until about the 3rd night, lol) and Carter internally acknowledges that they hardly know each and that a relationship between them is…farfetched to put it nicely. But they also both sense they have a good connection and that it is worth pursuing beyond the tour. It all felt like the beginning of something (which makes sense since it’s been a week), and I can’t remember if this is going to be a series or standalone. I do hope more is written about them because I would love to see them together. The ending to Murder Takes the High Road leads us to believe that John’s job is going to lead to more sleuthing, and he has invited Carter to join in. How cool is that? I want to read all about that adventure.

Overall this was an enjoyable story, but it felt different (off) from Lanyon’s other novels. Don’t mistake this comment for a negative. The story and writing were very entertaining, and the action (once it started) really kept up a fast pace and I was able to read roughly 70% in one day.

Yes, there is amateur sleuthing; yes, there is a murder to solve; yes, there is a romance between the two MCs; yes, the guilty party gets caught. The specific differences are tied to the feel of the story, the mysteries, the murders, the detecting and the characters. They were all different from Lanyon’s past stories, but it does have the same feel as her All’s Fair series (up to a point).

P.S. The romance between Carter and John is almost secondary to the mystery plot. It was nice, I enjoyed seeing them find each other, but they didn’t come across as the primary focus.

Through reading m/m romance and lgbt fiction, I have become a fan of the mystery genre.  Mystery is afoot when Carter joins a tour group in Scotland to meet an author whose mysteries he enjoys. There are rumors of suspicious deaths on the previous tour and suddenly everyone wants to play sleuth until one of the tourists ends up dead. Others on the tour are acting strangely, and Carter hears noises in the night that leave him feeling like more is going on. More is going on. Things are definitely not what they seem at first, but there is trouble brewing. And before the trip is over a mystery does need to be solved. There are twists and turns in this book that leave me having to be vague in this review or risk giving away too much. If you haven’t already read this author, it must be said – Josh Lanyon does mystery very well.

I don’t know if labels are necessary but this story feels more gay fiction than romance because Carter Matheson feels like the main character in this story. The story revolves around him as it’s his POV, and we see how the other characters interact with him.There is a bit of romance between him and his mysterious roommate, John. I loved their chemistry and believed it even though their attraction very quickly turned to more. Carter’s ex, Trevor, and his new boyfriend, Vance, are also on this tour with Carter. Their anger/jealousy over Carter offers a lot of gossip for the rest of the group. Another tourist, Ben, also seems attracted to Carter. If only he weren’t too busy being embarrassed at all the complaining his mother was doing.

I felt like I was people watching while reading this book and it was interesting. There were many interesting characters. Some moved the plot along by prodding Carter to look into what is going on. Some were antagonistic for various reasons, but made you kind of wish they might be the next victim. 😉 There were also some characters that were vague and mysterious. In the long run, I’m not sure they were important enough to even have been mentioned. I definitely enjoyed reading this book, though. I guessed some of the twists and turns the plot would take, but when it came down to it, the victim and the motive for murder in this book remained a mystery to me until the very end.

Today Josh’s work has been translated into nine languages. The FBI thriller Fair Game was the first male/male title to be published by Harlequin Mondari, the largest romance publisher in Italy. The Adrien English series was awarded the 2nd Annual All Time Favorite Male Male Couple by the Goodreads M/M Group. Josh is an Eppie Award winner, a four-time Lambda Literary Award finalist for Gay Mystery, and the first ever recipient of the Goodreads Favorite M/M Author Lifetime Achievement award.

Josh is married and lives in Southern California.