Lonely physiotherapist Harry Foster has the world at his feet. A full client list, a six figure Instagram following, and a publishing deal for a book he doesn’t have time to write until his agent offers him a break—a retreat to the wild south west coast.

Cornish horseman Joe Carter is lonely too. Rescuing horses and managing Whisper Farm takes up most of his days, and by night he plays chicken with the farm’s perilous bank accounts.

At his sister’s unwelcome suggestion, he rents his only bedroom to a bloke from the city, and when Harry arrives, he’s everything Joe isn’t—calm, patient, and gorgeous enough to be exactly the kind of distraction Joe doesn’t need.

On paper, they have nothing in common, but Joe is beautiful…glorious, and when an accident puts his life in Harry’s healing hands, the whisper of true love is inevitable. If the trouble that put the farm on its knees in the first place doesn’t get in the way.

Why I read this book:  I am a big Garrett Leigh fan and will read anything she writes.  Whisper spoke to me because it deals with hurt/comfort – totally my weakness. 🙂

This is different from your typical Garrett Leigh drama and angstfest romance. I would say Whisper is one of the lightest romances I’ve read by Garrett. No, it’s not all sunshine and rainbows, but it’s not deep and dark and cry yourself to sleep either.

I felt the story was very simplistic and linear, with no extreme highs or lows. If you’ve read Garrett Leigh before, you know what I mean (she can really put you thru the wringer). Harry is a physiotherapist who needs a place free from distractions so he can work on his book. Joe is a horseman with a complicated family history who has a room for rent. When these two met, neither of them expected the sparks that simmered under the surface.

For me, the relationship between Harry and Joe seemed rushed and despite their sexual awareness of each other building and building, the actual physical evolution of their relationship seemed rushed. They are just going about their day dealing with the awareness they have, and then one night they are talking and the moment where I thought they would get together passed, and then in a seemingly random time they are necking on the couch. I didn’t follow that path along with the characters. Ignoring that aspect, it was a very nice moment on the couch. 🙂

As I said, there are no extreme highs or lows here, but there are moments of drama and anxiety. Joe is injured and that part was certainly scary, his recovery painful to read because I can only imagine how much that truly hurt. I enjoyed seeing Harry and Joe grow closer to each other and those sweet moments were some of the best part of the book. I am a big fan of the cuddle moments – those quiet times two people share that is theirs alone and no one else’s. When Joe is recovering, Harry shares his rented room with him and they cuddle – often. ;D These are the moments where their bond is strengthened and when a crisis point in the story comes to a head, I wasn’t surprised at the lengths these two went to to fix it and save the other.

The relationship between Harry and Joe falls into the category of insta-love, and it did bother me because they hardly know each other, really. But overall I enjoyed this story and had fun reading it. I like seeing this lighter side to Garrett and can’t wait to read more in this series.

Something I forgot to mention: one night during a horse rescue Harry is there helping Joe load the trailer with donkey’s and a horse, and Harry has found kittens that had been missed during an earlier cat rescue. My heart just melted!!! I love kittens! So I will leave you with these adorable images. 😀 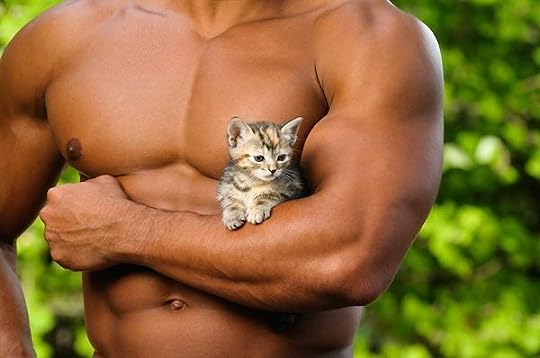 Enter the Rafflecopter to win an ebook from Garrett Leigh’s Backlist!

Where to buy: Amazon

Garrett Leigh is an award-winning British writer, cover artist, and book designer. Her debut novel, Slide, won Best Bisexual Debut at the 2014 Rainbow Book Awards, and her polyamorous novel, Misfits was a finalist in the 2016 LAMBDA awards, and was again a finalist in 2017 with Rented Heart.

Garrett is also an award winning cover artist, taking the silver medal at the Benjamin Franklin Book Awards in 2016. She designs for various publishing houses and independent authors at blackjazzdesign.com, and co-owns the specialist stock site moonstockphotography.com with photographer Dan Burgess.