Erryn reviews ‘Spencer Cohen (Spencer Cohen Book 1)’ by N.R. Walker. This book was released by the author on February 18, 2016 and is 155 pgs long. The audiobook version of this story was narrated by Joel Leslie, released by Tantor Audio on March 6, 2018 and is 5 hrs and 26 mins long.

Why I read this book: N.R. Walker is at the top of my buy list.  I enjoy humour with quirky characters.

******Check out the giveaway at the bottom of this review for a chance to win an entire autographed set of the Spencer Cohen books courtesy of N.R. Walker.****** 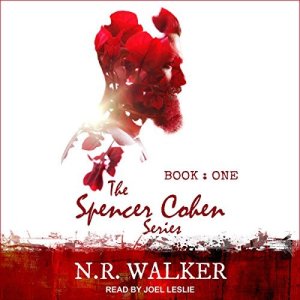 Spencer Cohen is the guy who gets answers to relationship questions. Playing the role of the new lover, his job is to make his client’s ex realize one of two things: he doesn’t want to break up or he really does. Either way, his client gets answers.

The ex would either apologize and beg, or turn and walk. But in the end, Spencer’s client won. If he wanted his ex back and got him, it was great. If the guy walked away, then as hard it was for the client, he knew it was over. Regardless of the outcome, Spencer’s work was done.

Andrew Landon’s ex left him without so much as an explanation. But his sister can’t stand to see him miserable, so, much to Andrew’s dismay, they hire Spencer to be Andrew’s new boyfriend to get the ex back.

For Spencer, it is never personal. Merely a business transaction. No emotions, no strings, no complications. Yeah right. Even a blind man could see how this would end.

I am a huge N.R. Walker fan, so when ‘Spencer Cohen’ was released on audio, I seized it.  And with Joel Leslie narrating?  Heaven!

That being said, this wasn’t my favourite N.R. Walker audio, but given that several of hers are at the top of my all-time favourite list, it would have been hard to achieve those heights.  ‘Switched’ and ‘The Weight of it All’ are always on my recommendation list.

I did enjoy the book.  Other readers have spoken highly of the series and I can see why.  Spencer is an Aussie transplant who has a backstory that is slowly revealed as the story progresses.  It’s a story that is, unfortunately, all too familiar to gay teenagers.

America, and Los Angeles in particular, has been good to Spencer.  By a stroke of fortune, he met his landlords Emilio and Daniela when he went into their tattoo and piercing shop to get his first tattoo.  He met his best friend Lola and her beau Gabe through a series of unusual events, and in the process, found a creative employment solution – “Dial-A-Boyfriend”.

I have to admit, it’s a unique endeavor.  Women and men hire Spencer to help them get their ex-boyfriends back.  Spencer’s primary weapon is jealousy – following the logic that if the dumper sees his ex with a new lover (Spencer), he will start to appreciate what he let slip through his fingers.

The story is told entirely through Spencer’s point-of-view, common with N.R.’s books.  He is a lumbersexual hipster with full-sleeve tattooed arms and a short beard.  He has a crew: Daniela and Emilio as well as Lola and Gabe.  They rally around him, helping him with his clients, and as Spencer says, he’s ‘fucking good’ at his job. The crew have a shorthand name for all of the clients so it’s natural for them to nickname Andrew Pianoman.

For reasons he doesn’t understand, that irks Spencer.  He sees Andrew as himself, not as a moniker.  This is the first sign that Spencer sees Andrew differently from those who have come before him.  Andrew is a good-looking man whose ex-boyfriend left him after they had been living together and had even agreed to marry.  Andrew is completely baffled as to why Eli left and wants him back.  Spencer’s job is simple: get Eli and Andrew back together.

To be effective, Spencer needs to get to know his clients.  He has a VETO policy – if he asks a question that is too personal, the client can say ‘veto’.

Andrew is adorable.  Slightly geeky and completely unable to see his own worth.  He’s sexy – although he doesn’t show off – and he has a great personality once his shyness gets set aside.  So Spencer spends time getting to know the real Andrew.  And that goes both ways.  Spencer loves Jeff Buckley’s cover of Leonard Cohen’s Hallelujah (one of my all-time favourite songs, and although I listened to Jeff’s version, the best one out there is Patricia O’Callaghan’s).  For Andrew, it’s Beethoven’s Moonlight Sonata.  Given his ability to play piano, this isn’t a surprise.  When Spencer digs deeper, though, Andrew admits to his true love.  And the image of Andrew playing for Spencer.  Wow.

There are other adventures to be had.  Spencer invites Andrew to hang around with him – to get to know each other so Eli will believe they are a couple.  There is a great scene in the tattoo parlour where Daniela asks Spencer, “what about a Prince Albert?”  Spencer’s reacts by thinking that his ‘dick retracted into his body’.  This is just one of the doozies that goes through Spencer’s inner monologue.  I love him.  He is self-deprecating and brutally honest.  Sometimes he manages to keep his thoughts to himself, but sometimes he just blurts them out.

And, when it comes down to it, he understands that a good portion of his job is building up the self-esteem of the client who has been dumped.  And he does this brilliantly:

“Jesus, Andrew, if there was a magazine called Sexy and Cool Cartoonographers who play jazz funk piano and watch Stanley Kubrick films, you would be on the cover of every issue.”

By this point, Spencer has moved from just seeing Andrew as a client to seeing Andrew as a man who Eli clearly did not appreciate.  And as he gets Andrew closer to getting Eli back, he sees that he is closer to getting his own heart broken.  Spencer has known heartbreak.  The one VETO he uses is when Andrew asks about the tattoos.  Spencer explains that there is something cathartic about having scars inked into your skin.  That insight spoke to me.  He tries to come across as a happy-go-lucky guy, but there is depth to him.  Those depths are stirred when he meets Andrew.

When the plan works and Eli asks Andrew to talk to him, Spencer sees his own life falling down around him.  I empathized with him on that as well.

The good news?  There are THREE more Spencer books including, ‘Yanni’s Story’.

Finally…Joel Leslie.  What can I say?  My lovely Joel Leslie.  He does Australian brilliantly (having voiced N.R.’s series Red Dirt Heart) of course, but he’s also comfortable with an American accent as well as a Spanish inflection.  And I adore his voice for Lola.  I grinned every time Lola spoke, seeing her in my mind’s eye.  And the image of her driving Cindy Crawford like Evel Knievel in Los Angeles?  That is one of the reasons I love this book – N.R.’s humour and Joel’s delivery.  Another perfect book.

She is many things; a mother, a wife, a sister, a writer. She has pretty, pretty boys who she gives them life with words.

She likes it when they do dirty, dirty things…but likes it even more when they fall in love. She used to think having people in her head talking to her was weird, until one day she happened across other writers who told her it was normal.

Comment on this post for the chance to win the entire Spencer Cohen set (4 books) provided and autographed by N.R. Walker

You must be 18 years or older to participate in this giveaway. Void where prohibited. Etc.