Erryn reviews ‘Deviations: Discipline (Deviations Book 3)’ by Chris Owen and Jodi Payne. This book was released by Torquere Press on April 25, 2007 and is about 268 pgs long. The audiobook version of this story was narrated by Maxx Power, released by Tygerseye Publishing LLC on July 3, 2018 and is 8 hrs and 1 mins long.

[Erryn] Noah and Tobias are my new favourite couple. 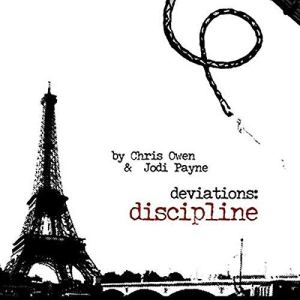 Tobias and Noah explore their relationships more deeply than they ever have, not just with their own dominance and submission, but with their friends.

As Noah helps Tobias through the loss of someone dear, he finds Tobias helping him, too, leading him through some intense sexual games, breaking down the last of Noah’s fears, and helping him face his biggest one: the cage.

Meanwhile, Tobias’ ex-lover, Phantom, becomes close friends with Noah as they discover and try to resist the simmering sexual tension between them. Their teasing turns to real support when Phantom reaches the breaking point thanks to the lack of a master in his life, something he desperately needs.

While Bradford works to become that master, Tobias and Noah go to Paris, where they see the sights, go to sex clubs, and renegotiate their contract. Returning from Paris to their own lives brings them all sorts of new difficulties, from deciding whether they should love together to trying to figure out just where Phantom belongs in their ever-changing relationship.

Deviations: Discipline is the third title in the popular Deviations series, which begins with Deviations: Submission and Deviations: Dominance. Chris Owen and Jodi Payne have another winner on their hands: a gripping, emotional tale you won’t want to miss!

Many of these other dynamics are explored through the secondary characters of the series.  The main couple is Tobias the Dominant, and Noah the submissive.  Noah, a police officer, is not what many people would envision as a sub.  But he has a stressful job during the day and is happy and willing to give up control during his weekends to his Dominant Tobias.  Although Tobias had understood being responsible for another’s health and well-being is a huge responsibility, the layer of his feelings for Noah complicates things.  In his previous relationship with Phantom, Tobias faced a situation he was, in the end, ill-equipped to deal with.  Phantom’s increasing demand for Tobias to inflict pain – including pain that would leave marks so deep that they might leave scars – was just too much.  Tobias is a sadist, but even he has a comfort level that Phantom couldn’t push him to challenge and so the men parted company.  Tobias was good at doing scenes with whips, crops, floggers, paddles, and other implements.  But, increasingly, Phan was demanding more intense scenes.  More pain.  More emotion.

In the end, Tobias had to give up his relationship with Phan.  He cared deeply for Phan, but he could no longer meet the young man’s needs.  He handed Phan’s care to Brantford, the owner of a BDSM club.  It was at this club that Tobias met Noah.  Their relationship was fraught with ups and downs and Phan’s perceived interference didn’t help.  Interestingly, Phan came around, wanting his former master to be happy.  He and Noah also connected, doing a fantastically sexy scene for Tobias and some other observers at the club.  By then, Tobias had discovered Noah’s penchant for and enjoyment of public displays.  That scene met everyone’s needs – in that moment.

Near the end of Book 2, Brantford put Phan in the white room at the club and tried to break him.  To someone outside of the scene, this looks like abuse.  For someone who understands catharsis, this is often a necessary process.  The submissive (or the person being helped) needs to let down all their barriers and admit their destructive behaviors and to accept the help being offered.

Brantford had suspected he might need help, and near the end of the intense, days-long scene, he called in Tobias.  The Dominant was able to get Phan through the last of his emotional breakthrough.  And although Noah has vague concerns about Tobias’ relationship with Phan, he understands Phan’s need for help.

Book 2 ended with a collaring ceremony.

So why am I provided all that background information?  Because the relationship between the three men, as well as the dynamics between each couple, is critical.  Noah and Tobias are deepening their relationship, increasing the emotional intensity of their scenes.  Tobias also encourages Noah to face his fears.  I held my breath as Tobias gently calmed Noah and worked him through the terror.  I think my elation matched Tobias’.  And I felt great pride in Noah.

Near the beginning of this book, there was a very touching evening with Phan and Noah.  The two submissives have found common ground in their love of ‘Sir’ and their innate and strong desire to serve.  I could see how the relationship benefited both men, Phan most especially.  Noah is able to give the younger man physical affection that Phan can’t get anywhere else.  Despite their previous sexual scene, the men refrain from a repeat, instead spending their time cooking, cuddling, and watching movies.

So when Noah tells Tobias his concerns about Phan’s mental health, Tobias passes along the information to Brantford, hoping his mentor, Phan’s temporary Dominant, can resolve the issues.

Just as Tobias is preparing to move the relationship with Noah into a new realm, an unexpected death rocks all four of the men, Tobias most of all.  Noah is there, of course, to help and support Tobias.  He is able to compartmentalize his own pain and put his Dom’s needs first.

Scene end.  Cue the next book.

I am hopeful the next book will be out soon and I cannot wait.

I live and write in eastern Canada. I went to a bunch of schools, learned a lot of things, and now make stuff up because not to do so is unthinkable. I’m fond of fountain pens, Levenger’s Circa system, and Steampunk fashions. I’m inspired by the day to day minutia of life, and find beauty in the way words go together. I like texture and richness of experience. I’m not shy. I’m happy, I’m learning, I’m living.

JODI spent too many years in New York and San Francisco stage managing classical plays, edgy fringe work, and the occasional musical. She, therefore, is overdramatic, takes herself way too seriously, and has been known to randomly break out in song. Her men are imperfect but genuine, stubborn but likable, often kinky, and frequently their own worst enemies. They are characters you can’t help but fall in love with while they stumble along the path to their happily ever after.

For those looking to get on her good side, Jodi’s addictions include nonfat lattes, Malbec, and tequila any way you pour it. She’s also obsessed with Shakespeare and Broadway musicals. She can be found wearing sock monkey gloves while typing when it’s cold, and on the beach enjoying the sun and the ocean when it’s hot. When she’s not writing and/or vacuuming sand out of her laptop, Jodi mentors queer youth and will drop everything for live music. Jodi lives near New York City with her beautiful wife, and together they are mothers of dragons (cleverly disguised as children) and slaves to an enormous polydactyl cat.