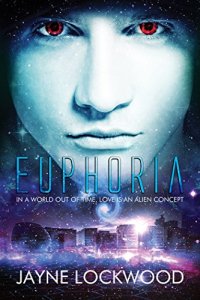 It might take the arrival of an alien being to remind an isolated man what it means to be human.

With a stressful job, his boss breathing down his neck for profitable results, and an estranged wife and daughter, scientist Kurt Lomax doesn’t think life can get much harder. Until a nonbinary extraterrestrial with an otherworldly beauty, captivating elegance, and a wicked sense of humor inconveniently shows up at his apartment.

Vardam watched the destruction of their own world, and they don’t want to see the same thing happen on Earth. They are lonely, and feelings soon develop between them and the supposedly straight scientist—feelings Kurt reciprocates, much to his confusion.

The arrival of cheery interpreter Tom Soames—whose Goth appearance belies a gentle heart—is like a ray of sunshine in the somber lab. He acts as matchmaker for man and tentacled extraterrestrial, unwittingly instigating a national crisis when the news breaks out.

But will a misunderstanding ruin Kurt and Vardam’s chances for happiness together—along with the hope for peace between humanity and the Var?

To celebrate the release of Euphoria!

Exclusive Excerpt AND a GIVEAWAY

Hi Everyone and thank you so much to Rainbow Gold Reviews for supporting Euphoria! I won’t blab on too much, but I just wanted to say a couple of things.

This book was a real plot bunny moment for me, as I’m a romance writer at heart. Having written romantic suspense, romantic erotica and MM erotica, it seemed a totally logical step to think, “hey, I’ll write a sci-fi!”

I was between projects, and just wanted to write for the hell of it to see what came about.

The only bit of research I did was type “the essential elements of a good sci-fi novel” into Google and read up on the nuclear bunker that just happens to be down the road from me. Other than that, I was seriously winging it.

In Euphoria, there really is something for everyone, and a #1 slot on Amazon US’s LGBT/Science Fiction category seems to suggest I was onto something.

Which is something of a shock, but it’s lovely. I hope you pick up this book and give it a try. As well as the sci-fi and time-travel fantasy, there are two romances to enjoy. I guess the apple doesn’t fall too far from the tree after all.

“Vardam? Where are you?” He stripped off the gloves and went to the spare room but it was empty. So was his own room. Then the bathroom door opened.

Vardam had found Kurt’s foaming shower gel, and by the look of them, had used the whole lot. The white stuff covered the top half of Vardam’s body and arms where they had obviously tried to wipe it away and failed, only creating more foam. It was over their face, head, shoulders, just about everywhere. Now all Kurt could see were Vardam’s eyes, showing confusion and a little panic.

Kurt put it down to stress, but for some reason, he found the vision unbearably funny. He began to laugh. Not just chuckle but a full-blown belly laugh, one that bubbled up from deep inside him. For a few moments, he was helpless. Every time Vardam blinked, he just laughed harder,until he was gasping for breath.

When Vardam began to look annoyed, it only made it worse. The Var was standing there, hands on hips, waiting for Kurt’s assistance, but he wasn’t in a position to help anyone.

“I’m sorry,” he gasped in the end. “You should see yourself!” He led Vardam back into the bathroom and showed them the mirror.

That sobered Kurt immediately. “Don’t get used to it. It doesn’t happen very often. You need to have a shower.” He reached behind the glass to turn on the monsoon shower head, setting it to lukewarm.

“You just get in and the water will wash it all off Come on, I thought you were amphibious?”

Kurt felt heat rise in his face. “That’s … not appropriate. You’re a big boy, Vardam. It won’t hurt you.”

“Not man either. Not woman. I’m Var.” Vardam suddenly wrapped their arms around Kurt, smothering him in a foamy embrace.

Kurt tried to feel angry, but after the unexpected mirth, he didn’t have the energy. He stared down at himself, covered in dissipating bubbles, his shirt wet and cold, clinging to his skin.

Nothing bad was going to happen. It was just water.

Vardam was watching him, almost as if they understood the struggle Kurt was going through.

Kurt thought he had no choice. But he did have a choice. He could walk away.

He didn’t want to.

That was a revelation.

Before he could change his mind, he stripped off his clothes and stepped into the shower, turning it to slightly warmer than he was used to. He had to admit, it felt a lot more pleasant.

Vardam joined him, spreading each hand to let the water flow through their fingers. They picked up the shower gel, squirted it onto Kurt’s back and washed him.

“Kurt too skinny. Show too many bones.”

“I could say the same about you.” Kurt’s hands hovered around his private area. The Var’s hands felt good on his back and shoulders.

“Thank you.” Kurt could not look up, even though Vardam’s voice was matter-of-fact.

“Kurt relax. Let Vardam wash.” Vardam brushed Kurt’s hands away and washed him all over. To Kurt’s ultimate embarrassment, when the Var touched his privates, blood began to rush down south.

Baby maker? Good grief. It was too much. Kurt removed himself from the shower and rapidly covered his body with his bathrobe, his face scarlet. Vardam was still in the shower, unconcerned, enjoying the spray.

“Dry with this.” Kurt gave him a towel and left him to it.

As he dressed, he ruminated on what had happened. It was the first time in a very long while since anyone had touched him so intimately. Too long.

There are so many things that I want to say about this story. I hope I don’t forget any because I really want to do this one justice. I actually reached out to this author after reading the story because I thought it was so very well done that I had to share it with as many people as I possibly could. Jayne Lockwood was incredibly sweet and gave us a guest post, an excerpt and a fabulous giveaway! Thank you so much, Jayne ❤

I went into the story with no expectations. I’ve never read any published work by Jayne Lockwood and I had only glanced at the blurb. It sounded intriguing and the cover was gorgeous and I thought why not, right?

I was pleasantly surprised to be engaged right off the bat. Very well written and it gave me a little bit of background about Professor Kurt Lomax  who was a cold, hard character but I could tell that there were reasons for that. He’s a complex man who has difficulty connecting emotionally. I imagine that many scientists get lost in their heads just because that’s the way they are wired, but Kurt has a past that make him build extra walls around himself. He has enough moments where his emotions and fears show to help us not hate him and it gives just enough of a peak into the person he tries to hide from everyone to have you wanting him to come out on top. He’s dealing with a crumbling marriage, he’s crap at being a father, he’s a germaphobe, he’s a difficult person to work with and he’s got a greedy boss that hates him for personal reasons. This is just the tip of Kurt Lomax’ iceberg.

Man, the cards are really stacked against him.

In falls Var. Literally. Right into his living room. Var is amazing. That is all.

Hahaha, just kidding, but Var really was the best portrayal of a non binary extraterrestrial being that I could ever hope to read. I adore this character and the way they interact with everyone.

I love when a message is imparted this strongly yet gently in a book and Var has more than one message in this story. Var is in a race against time to try to save the people of Earth and falls in love along the way. Feelings and emotions are new to them and it was pure joy to go on this adventure through time and space with them.

The secondary characters are excellent and written well enough that they don’t feel a bit secondary. There were tender moments, moments fraught with danger and suspense and a portrayal of m-preg that was realistic and believable without being condescending to the male species.

Jayne Lockwood took some very real issues, like pronouns for non binary persons and wrote about them with dignity and respect while mixing in humorous moments that brought unexpected levity.

And now, a GIVEAWAY!

There are TWENTY copies of S A Smythe’s hot MM romance novel, Lexington Black, on Instafreebie so snap yours up! Available to download in PDF, MOBI, and EPUB. Reviews are very welcome but not obligatory. This is a giveaway after all, and a thank you for reading this far. The offer is open until August 31st 2018 at 11:59 CST.

Jayne Lockwood has always wanted to learn to fly. Spending free time honing her Peter Pan skills on an aerial hoop, she also creates flights of fancy in her books, mingling sex and romance with angst and a healthy dash of dark humor.

Since she was a small child, Jayne has always sympathized with the villain. It all began with Alice Cooper, even though she was banned from listening to his music by her mother. From wanting to sail away with Captain Hook or redeeming the Child Catcher, the antihero has been an enduring fascination ever since.

Jayne is an outwardly respectable member of an English village community. She also is one of the founder members of WROTE podcast, which is dedicated to showcasing LGBTQA authors and their work, and now writes book reviews as well as diverse fiction.

She is also in a Dom/sub relationship with a cat called Keith.