Dana reviews Hiding in Plain Sight (Camp H.O.W.L. Book 3, Dreamspun Beyond #28) by Bru Baker (Published by Dreamspinner Press, September 18, 2018, 256 pages) A copy was provided in exchange for an honest review.

Why I read this: After reviewing the first two books, I have become invested in Camp H.O.W.L. and the people who live there. I just had to request the third book of this series! 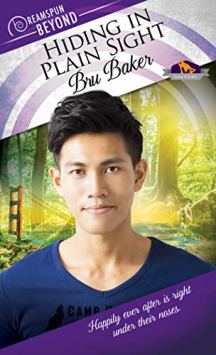 Happily ever after is right under their noses.

Harris has been keeping a big secret for years—his unrequited mate bond with his best friend, Jackson. He’s convinced himself that having Jackson in his life is enough. That, and his work at Camp H.O.W.L., keeps him going.

Things get complicated when Jackson applies for a high-ranking Tribunal job in New York City—far from Camp H.O.W.L. The position requires he relinquish all Pack bonds… and that’s when his wolf decides to choose a mate. Suddenly Jackson sees his best friend in a sizzling new light.

Their chemistry is through the roof, but they’re setting themselves up for broken hearts—and broken bonds—if Jackson can’t figure out a way to balance his career and the love that’s just been waiting for him to take notice.

I am so glad I reviewed the first book of the Camp H.O.W.L. series because I have been treated to some cool world building, sweet romance and a little bit of angst while reading that and the other two books in the series. Camp H.O.W.L. is a remote place in an Indiana state park. There young were shifters can make their first turn with the safety of trained professionals to help them deal with physical, emotional, and social changes that come with being werewolves.

Each couple that has been featured has had something special about them from an adult facing their first shift years after it’s supposed to happen, to a human and wolf being mated. In this book, Harris and Jackson are both wolf shifters and have been for awhile. Their romance isn’t necessarily rare or unconventional, but their friends to lovers story is right up my alley. Harris has been a secondary character in the previous books and while I liked him, I wouldn’t have said I needed his story until some flirting with Jackson happened in book two and I just had to see them get together.

It’s not a easy path for them, though. Harris loves helping out the kids and doesn’t want his incomplete bond with Jackson to be a rejected bond, so he pretends there’s nothing there whenever he sees him. Jackson has big goals. He wants to become a tribunal enforcer to pave the path to becoming an alpha’s second. He can’t be an enforcer and mated, though, so he ignores any attraction to Harris. A high profile client at Camp H.O.W.L. puts them together a lot and soon they can’t help but act on their desires. But is their affection for each other enough to give up either’s dreams. A lot of what holds these two back is the lack of communication. Which seems to be the problem for many couples in romance.

This book was a great addition to the Camp H.O.W.L. series. I saw that this was the last book in the series and I was sad because I will miss seeing the camp and some of the characters there. I am very excited, though, to see that this werewolf universe will be expanded and the author will continue writing about them in a spin off series featuring a pack from New York. There will be familiar faces to be seen and I am curious how much further the author will expand the series. In this book, we first see that there are other supernatural beings out there, like selkies and fae. The peace between the different species seems to be fragile and I wonder if the problems we saw in this book will be carried further into the series. The bit of action and “political” drama added to this story and I definitely recommend this book.

Bru Baker got her first taste of life as a writer at the tender age of four when she started publishing a weekly newspaper for her family. What they called nosiness she called a nose for news, and no one was surprised when she ended up with degrees in journalism and political science and started a career in journalism.

Bru spent fifteen years writing for newspapers before making the jump to fiction. She now works in reference and readers’ advisory in a Midwestern library, though she still finds it hard to believe someone’s willing to pay her to talk about books all day.

Most evenings you can find her curled up with a mug of tea, some fuzzy socks, and a book or her laptop. Whether it’s creating her own characters or getting caught up in someone else’s, there’s no denying that Bru is happiest when she’s engrossed in a story.

She and her husband have two children, which means a lot of her books get written from the sidelines of various sports practices.