Dana reviews Boy Shattered by Eli Easton (Published October 16, 2018, 317 pages.) A copy was provided in exchange for an honest review.

Brian
You’ll make it out of here, Brian. I swear.
I had everything—school quarterback, popular with girls, and my dad was proud of me. I told myself it didn’t matter no one knew the real me. And then I nearly died. Landon saved my life. He’s the bravest guy I know. He came out a few years ago, proud and fierce, and he ran into gunfire to help others. Me, I’m a mess. Can’t even stand to be in a room with the curtains open. But here’s the thing about losing it all: You get a chance to start over and be someone new. Only how can I move on when the two shooters who attacked our school were never caught? And why do I feel like I’m still in the crosshairs?


Landon
Will you kiss me?
When I came across Brian Marshall,the hottest guy in school, dying on the cafeteria floor, I did what anyone would do. I tried to save him. His request surprised me, but I figured he needed comfort, so I kissed him on the forehead. When he survived and came back to school, he was broken in body and mind. He still needed me, and soon we were unlikely besties. But what I saw at school that day woke me up. I want to demand action on gun control, lead protests, raise my fist. I’ll tear the world down if I have to. And if I can get the man of my dreams and save the world at the same time? I’ll take it. Only I didn’t understand that the horror at Jefferson Waller High wasn’t over.

First, I have to say that I am a big fan of this author. She stole my heart with Superhero, a young adult friends to lovers story. She has written a few more young adult / new adult stories that I loved also. So when I heard about this new YA story, involving two young men and the romance that builds after a school tragedy (something that I don’t think enough attention can be brought to), I couldn’t sign up fast enough to review. As a mother and as a human being, the idea of my kids or any other children losing their lives to gun violence makes me want to break down and cry. I want to rail at the NRA and their members for purporting the idea that safer and stricter gun laws equals the liberal government trying to take away their second amendment rights. I guess it should be said that it isn’t necessarily an easy subject and reading this book will evince strong emotions, but I’m so glad I chose to pick it up. We need more kids like the characters in this book and like the ones from Parkland. It is the only thing that gives me hope in the face of the senseless violence.

I love the two main characters in this story. Both strong and brave, but in completely different ways.  Landon is a high school senior who is confident in who he is. He is one of the few openly gay kids and hasn’t had any real opposition because of it. Brian is outwardly confident, he’s the high school quarterback and also plays basketball and baseball. Where Landon is an open book, Brian hides who he is from his friends and family. But he needs to. His father has alt right buddies, and listens to shows that spin conspiracy theories on liberal ideals. In my head I imagine Alex Jones and I feel Brian demonstrates his courage by hiding who he is, staying safe, and not hating himself because of his father’s opinions on gay people. Landon is also courageous for not hiding who he is. See, both brave, but not in the same way. And then there is the day when all their confidence and bravery is tested.

Suddenly I am finding this hard to review. I want to say so much, but don’t want to give anything away. For a little while after Brian and Landon’s high school (The Wall) is invaded, Brian loses who he is. He can’t play sports, lost his best friend, and fear is a constant companion. When he returns to school, he doesn’t have the same connection with the rest of the players and the only one who makes him feel safe is Landon. They easily become wrapped up in each other and Brian reveals his true self to one lone person. As you might expect it isn’t an easy romance. When they are alone, sure, Brian can be who he truly is, but he can’t be honest at home. And Landon’s newfound activism, while hopeful and admirable to me, takes its toll on Brian who is afraid someone might hurt Landon and just wants time with his boyfriend without having to think about the shooting that changed his life. I think the author shows both sides of their feelings and neither one of these guys is ever less than wonderful to me.

I feel like there is a lot to gain from putting yourself in others shoes and experiencing their feelings. For me, gun safety is a no-brainer issue. But others could really learn something from what Landon, Brian, and the rest of the class go through. Their romance is sweet and age appropriate for a YA novel. In addition there is another element to the book. It’s mentioned in the blurb, so I feel safe to share that in a rare twist, the killers not caught, and that adds an air of mystery to the book. A little amateur sleuthing took away some of the fear of their escape, because I felt like we could be a part of discovering why it was done.

The ending of the book was really well done. Landon and Brian definitely went through a journey and because of their year age difference even had to spend some time apart, testing the strength of their relationship. While the characters might seem more mature than some teens, the experience they went through could easily account for that. There is some reformation of characters who I didn’t like a whole lot in the beginning. I might be biased because I probably have some political views in common with the author, but I don’t feel like the politics in the book were an overkill. Hopefully the book will make the reader think and bring attention to an issue that is becoming so common we are becoming inured to it.  Boy Shattered is one of the best books I’ve read, and I can’t recommend Eli Easton’s writing enough. 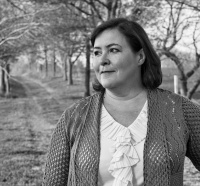 Having been, at various times and under different names, a minister’s daughter, a computer programmer, a game designer, the author of paranormal mysteries, a fan fiction writer, and organic farmer, Eli has been a m/m romance author since 2013. She has over 30 books published.


Eli has loved romance since her teens and she particular admires writers who can combine literary merit, genuine humor, melting hotness, and eye-dabbing sweetness into one story. She promises to strive to achieve most of that most of the time. She currently lives on a farm in Pennsylvania with her husband, bulldogs, cows, a cat, and lots of groundhogs.


In romance, Eli is best known for her Christmas stories because she’s a total Christmas sap. These include “Blame it on the Mistletoe”, “Unwrapping Hank” and “Merry Christmas, Mr. Miggles”. Her “Howl at the Moon” series of paranormal romances featuring the town of Mad Creek and its dog shifters has been popular with readers. And her series of Amish-themed romances, Men of Lancaster County, has won genre awards.


In 2018 Eli hopes to do more of the same, assuming they reschedule the apocalypse.