Rainbow Gold Reviews is happy to be one of the blogs hosting this tour to celebrate the release of ‘From These Ashes’. Congratulations Davidson King on the fourth book in this wonderful series!

Be sure to check out the rafflecopter giveaway at the end of this post. Good luck! ❤ 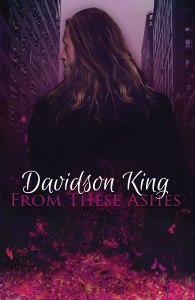 A product of his past, Black spends half his time saving lives and the other half taking them. Every day, a hard choice must be made and he’s the man to make it. Long ago, he vowed to never love again; one-night stands with a willing body was all he ever needed. But along came Quill, and Black’s life is irrevocably changed. He never expects something as simple as Quill’s persistence to alter the way he not only sees the world, but how he lives it.

Quill has bad taste in men and equally horrible luck. Growing up wasn’t easy, surviving is even harder. When his past and present collide, he’s convinced he’ll finally witness his own destruction. But when an unlikely antihero steps in to protect him, his life is turned on its head. He’s spent months flirting with the man of his dreams and hoping he’d take notice. But it turns out, being on Black’s radar isn’t all it’s cracked up to be, and his idea of protection varies greatly from Quill’s.

Unknowingly sharing the same goal—burying their own pasts deeper than the fires of hell can reach—they’re both unaware that jumping into that fire will do more than ignite their feelings, it could lead to their own demise. Will Black and Quill be consumed by the flames, or from these ashes, will they find their own happily ever after?

Covers by Designs by Morningstar https://www.facebook.com/groups/CoversbyDesignsbyMorningstar/about/ 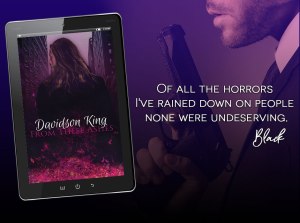 I parked my car as close to Joker’s Sin as I could. I took my leather jacket off the seat and quickly put it on, hit the alarm, and made my way toward the club. There was still a line after midnight. The place closed in two hours, why would people wait that long? Well, I wasn’t.

“Can I help you?” the large bouncer asked.

“No.” I barreled through him and made my way into the club. It was like dubstep nation in there and so much fucking leather.

“Hey.” I felt someone tap my shoulder. I whipped around and grabbed whomever it was by the neck. It was the bouncer from the door.

“Not today, Junior. You tell Atlas, Black is here. Now fuck off.” I pushed him away and made my way to the bar. I hadn’t been inside Joker’s Sin before, I only knew how it looked based on Mace and Bill’s description.

I liked the concept and would’ve taken more time to appreciate it if I wasn’t hell-bent on finding Quill.

“Can I help you, handsome?” I turned and looked down. A small guy with pink hair and barely-there black leather shorts had spoken.

The small man slid his fingers down my arm. “Mmm. Quill didn’t tell me he had a God for a boyfriend. You’re better than most I see him with.” He jerked his head to the right. I followed the direction and there before me, was Quill.

He was dressed in red leather. I couldn’t see below the waist, but the vest he wore was tight against his pale skin. I knew he loved his bracelets, and he had them all on tonight. His arms were covered in red and silver glitter, making him stick out like a gorgeous disco ball. It looked like he had put all of his piercings back in, and I could see when the light shown on his face, he also had glitter on his cheeks.

“I’ll just leave you to it,” the small man said with a chuckle, and I took the few steps to where Quill stood mixing drinks.

He hadn’t noticed me yet, and I got a chance to see he had red eyes and black liner on his lids. He looked like pure sin. I was surprised when I felt my cock stiffen. Until now, I was never sexually interested in Quill. Okay, to be fair, I admired him. He was stunning, but there was a line cut somewhere between admiration and want.  Why was I feeling something now?

“Are you following me?” Quill’s voice snapped me back to attention.

Quill narrowed his eyes, but I saw how he swallowed as he took me in. He was a flirt by nature and no matter how peeved he was at me, he could never sustain that anger.

This is the fourth book in the Haven Hart series and one that I’ve been hoping and waiting for ever since I first learned about Black. Then, when Quinn was added to the mix I wanted it even more!

I love these characters so much, Black has been this mysterious boss-man that takes care of other peoples dirty business as well as running a security company. He loves his city, has a dark past and doesn’t want to have a real relationship with anyone. He seems to have a limitless supply of power and money and enjoys the things and people that station brings. He’s VERY dominant and controlling and that is something that brings a bit of contention to his and Quill’s budding relationship. He tried as hard to avoid Quill as Quill did to pursue Black but in the end they couldn’t fight the pull towards each other.

Quill, is my absolutely favorite type of character. The type that is broken but puts on a good front, he’s much stronger than he looks and he hasn’t completely given up hope that there is a place and person for him to call home. He’s one of those “Looks can be deceiving” people but he’s a genuinely good guy.

Quill has been running most of his life. From family and more recently an ex (there are scenes and portrayals of domestic violence). The stakes of bringing his stalker ex to justice has higher stakes than anyone could guess. I liked the way Quill took charge of his own destiny even when people tried to stop him every chance they could.

The slow build into their relationship was perfect and their feelings genuine and realistic. These two needed to learn each other and share things that they never had before in order for them to see each other clearly.

This book is action packed ,filled with drama and angst. Once I started I literally couldn’t put it down until I finished! 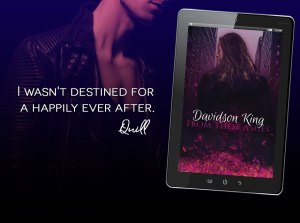 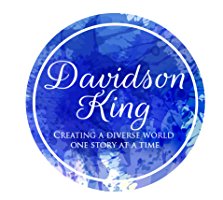 Davidson King, always had a hope that someday her daydreams would become real-life stories. As a child, you would often find her in her own world, thinking up the most insane situations. It may have taken her awhile, but she made her dream come true with her first published work, Snow Falling.

When she’s not writing you can find her blogging away on Diverse Reader, her review and promotional site. She managed to wrangle herself a husband who matched her crazy and they hatched three wonderful children.

If you were to ask her what gave her the courage to finally publish, she’d tell you it was her amazing family and friends. Support is vital in all things and when you’re afraid of your dreams, it will be your cheering section that will lift you up.