Erryn reviews ‘Protecting My Commitment (Sulfur Springs Book 1)’ by Taylor Rylan. This book was released by the author on July 6, 2018, and is 277 pgs long. The audiobook version of this story was narrated by Michael Pauley.  It was released on December 27, 2018, and is 5 hrs and 38 mins long. A copy was provided in exchange for an honest review.

Why I read this book: Taylor Rylan is a new author to me so I wanted to have a listen for myself. 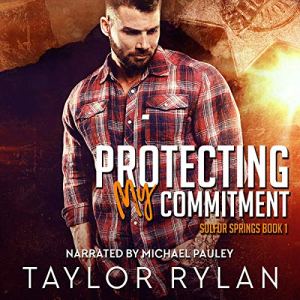 Dalton Andrews has seen it all. After spending a little over 10 years with the Denver PD, he’d had enough and joined Wildlife Services, not expecting it to be such an isolating career. When his job takes him on assignment to Crooked Bend, he jumps at the chance to work with actual people again when the town’s sheriff needs to hire a few more deputies. While at his new boss’ wedding reception, he unexpectedly meets a blue-eyed architect that makes his brain go fuzzy.

Collin McKenzie has trust issues. After countless bad experiences, culminating in spending over a year hidden in the closet by his ex, he decided enough was enough. He not only broke up with him but he moved to a different state to start fresh. He loves working for the Welsh brothers and living in Wyoming puts him closer to his family. He’s sworn off men, but while attending a wedding, he sees a dark-haired man that makes him catch his breath.

After spending an unforgettable night together, Collin mistakenly lumps Dalton in with his past experiences. Things are awkward between them, but the attraction is there and undeniable, so they agree to give it a try. But when Collin’s ex finds him in Wyoming and won’t take no for an answer, Dalton steps up and claims what he wants – Collin. But will he be able to protect the man he’s quickly falling hard for? And will Collin ever trust him enough to let him in?

Protecting My Commitment is the first book in the Sulfur Springs series. This is a Men of Crooked Bend spin-off, but it isn’t a requirement that you listen to that series to enjoy this one. Familiar faces will be seen, but this series takes you off of the ranch and into the lives of those in Sulfur Springs. While each book focus’ on a different couple and may be listened to as a stand-alone, you will receive maximum enjoyment listening to them in order. Each book contains sexually explicit material between two men and is intended for adults over 18 years of age.

Collin McKenzie admits he can be immature.  Dalton Andrews admits he can jump to conclusions without all the facts.  So, flawed human beings.  I like those characters.  Ones who have a lot of growth potential in the book.  The book begins with a very memorable rant by Collin.  Dalton has overheard and to say this makes things awkward is an understatement.  This misunderstanding ends the chances of any possible relationship between the two men.  Or it might have, but as they both live in a small town and keep meeting each other, the attraction continues to sizzle and, inevitably, they act on it.

Then Collin acts immaturely, Dalton gets upset, and the cycle begins again.  Only this time, it’s Collin who’s doing the running.  When his ex-boyfriend enters the picture, it’s only natural Dalton, the law enforcement officer, get involved.  An interesting solution to the stalker problem doesn’t yield the desired results and more characters becoming enmeshed in the whole mess.

I want to pause here and point out, this is the first book in a series.  It was pretty clear from the outset, though, that this series is an offshoot of another one.  There are many, many characters (mostly male) who are married, settled and happy.   For readers of Ms. Rylan’s books, I’m sure it’s always nice to revisit old friends and watch their maturation and happiness.  Occasionally (emphasis on occasionally), I got confused at all the other characters.  Also, there were only a couple of female characters.  One is the girl who worked in the coffee shop who has a crush on a gay character and another is a vapid nasty selfish woman.  There weren’t even any female deputies.

I’m highlighting the lack of good females because this is something I often see in m/m romances and it bothers me. Especially because these are often books written by women and the women in them are reduced to stereotypes or cardboard cut outs. Some of my favourite series have strong female secondary characters and I hope there will be more women in subsequent stories.

The ending was perfect and I did enjoy the book.  At times, though, I felt like I wanted more.  I wanted to love the book but just couldn’t fall in love with the characters.  I blame that on myself and not Ms. Rylan’s book, which I do recommend.  I believe (or hope) the next romance will be Collin’s brother Daniel, and I’m looking forward to it.

Finally, Michael Pauley.  I LOVE Michael Pauley and always find his narration to be great.  Given that this is Ms. Rylan’s first audiobook, all those other male characters from previous books did not have voices and Michael provided distinct ones for all of them.

After several years of daydreaming about sexy men in her head, Taylor decided to finally start writing about them! That’s where the Men of Crooked Bend came from, although at the time, she had no idea as to what she would name the town, nor what state it would even be in. She quickly learned that even though she had ideas in her head, it was her characters that ultimately decided what would happen in each story. She goes into each adventure with a set plan but already knows that in the end, things will change and that her characters are going to get their way.

When she’s not writing about sexy men, she loves to read about them. Even if, her reading time has become less frequent since she started writing, she still tries to find time to read at least once a week.

​She is a busy mom of three and one kitten named Lucky.

Her Men of Crooked Bend Series is her first series but she already has a spin-off in the works. She also writes about sexy shifters and their fated mates. Her Honey Creek Den is just the first of several series planned!