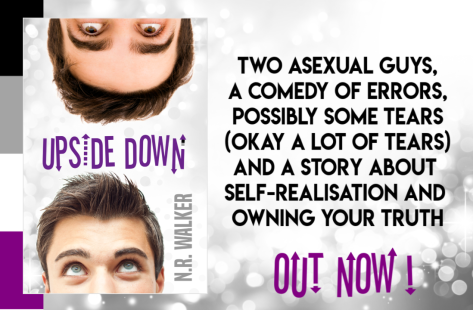 We were provided a copy in exchange for an honest review.

Jordan O’Neill isn’t a fan of labels, considering he has a few. Gay, geek, a librarian, socially awkward, a nervous rambler, an introvert, an outsider. The last thing he needs is one more. But he when he realizes adding the label ‘asexual’ might explain a lot, it turns his world upside down.

Hennessy Lang moved to Surry Hills after splitting with his boyfriend. His being asexual had seen the end of a lot of his romances, but he’s determined to stay true to himself. Leaving his North Shore support group behind, he starts his own in Surry Hills, where he meets first-time-attendee Jordan.

A little bewildered and scared, but completely adorable, Hennessy is struck by this guy who’s trying to find where he belongs. Maybe Hennessy can convince Jordan that his world hasn’t been turned upside down at all, but maybe it’s now—for the first time in his life—the right way up.

Why I read this book: I am a huge N.R. Walker fan so anything she writes, I’m going to read.

OMG this book.  When I read the blurb for this I knew I HAD to read it.  While I have read pretty much everything N.R. has written, I don’t think she has written about Asexual main characters.  I like to think that I will read pretty much everything LGBTQ+ related, but I do have to admit I have not read a lot of books with asexual characters in them.  I am truly blessed to have read this one.  You could tell from the beginning that N.R. had done her research before writing Jordan and Hennessy.

Seriously I LOVED Jordan, cause really?  A librarian who uses the f-bomb, in every imaginable form, all the time, yes please.  That is my favorite word and I honestly think it works in every situation, lol. So yea Jordan grabbed me right from the beginning.  And the verbal diarrhea, well that is just plain hilarious.  Yes I know I that when his nerves kick in he can’t help it, but man some of the stuff that came out of his mouth left me laughing so hard my kids asked what was wrong with me.

Hennessy, oh that name is just pure perfection.  Kind of like the man himself.  Ok yes, I know no one is perfect, but he is a perfect fit for Jordan.  I appreciated that unlike Jordan, who just realized he was asexual, Hennessy had already figured out who he was.  This made it easy for Hennessy to help Jordan come to terms that not everyone has the same sexual urges, desires, or wants as the next person.  This I think was what made the book so amazing.  What is normal for one couple is completely different for the next.

Some people like sex, so don’t.  Some like a lot of physical contact and some don’t want any at all.  Some people only like the members of the same sex, some like both sexes, some the opposite, and for some it depends on the person inside.  Some people like to be monogamous, some need open relationships, while some work in a poly relationship  There is no right or wrong way to love.  Just as long as it works for the people in the relationship.

This book was absolutely brilliant and I think it is one that everyone needs to read.  Whether you have read many books with asexual characters or this is your first, I can promise you that it won’t disappoint.  You will laugh, and maybe shed some tears (I did), and you will laugh some more, but this book will be one you will want to reread many times.  I am so glad I had the chance to read this one.

Why I read this book: Same as Bethany, I am a huge N.R. Walker fan so picking this one up was a no-brainer..

When N.R. Walker announced she’d written a book with two asexual (ACE) heroes, I was intrigued.  First of all, I have yet to read an N.R. book I haven’t loved.  Secondly, I was curious.  I’m familiar with asexuality but haven’t delved into researching it.  Clearly N.R. has because everything in this book felt authentic.  When Jordan attends his first support meeting for asexuals, one of women, Nataya, says:  “Normal is subjective.  And by whose definition should we fit anyway? Do we take normality from people like my grandma who is horrified by just about everything we see on the internet, or do we take normality from guys who think it’s normal and completely okay to send dick pics to people they’ve never met?”

As someone who has been on the receiving end of some dick picks, I related to this thought.  I fall somewhere between offended by everything and wishing guys sent things that were more creative than pics of their cocks.  So, surprisingly, I related to some of the discussions.  In fact, there was a lot in this book for everyone.  Yes, there’s no sex.  But in some ways, it made for a more creative book.  Words became critical for the wooing.  I hooted with laughter over this discussion between Jordan and Hennessy when he asks what Jordan’s superhero would be:

“If you were a superhero, what would your name be?”

“Is that my question of the day?” I asked.

“Well, my superhero name would be something completely awesome. Like Super Book Man in Latin.”

“Super is Latin,” he replied casually.  “Etymologically, the Latin word for super is super.”

“The only kind I’m into,” I said, then turned a dozen shades of red.  “I mean, not physically into it.  I’m not really into anything like that.  You know why.” I cleared my throat.  “I think I’ve embarrassed myself enough for one day, so never mind.”

This is classic Jordan.  The man was born without a filter and has gone through life pretty much saying whatever comes into his head.  And that’s what made his character so relatable for me.  I manage to stick the filter in place sometimes, but often not fast enough.  My mouth has gotten me into trouble more than a few times but I love how Hennessy embraces Jordan’s quirks and views them in a positive light.  It’s nice to have someone who says how he honestly feels which is why when Jordan doesn’t communicate something critically important, they, as a couple, hit the rocks pretty hard.

Jordan is such a fireball that sometimes I felt I was grasping to relate to Hennessy.  He has a great job, really good friends, and runs this support group for like-minded individuals struggling with their asexuality in a world where everything revolves around sex.  His obvious brilliance, especially with computers, is impressive.  His personality was a bit less defined, although his interactions with his former ex-boyfriend were interesting.  Overall, though, he was a good foil for Jordan’s over-the-top personality.

I have to give a shout-out to the whole cast of secondary characters, some of whom were downright scene-stealing. Jordan’s co-worker Merry was the best friend a guy could ask for.  Her advocacy for him and her indefatigable belief in him made her all the more endearing.  She also, on occasion, lacked a filter.  Jordan’s roommate Angus was also hilarious. His description as being similar to Hugh Grant’s roommate in Notting Hill gave me a great point of reference and was very apt.  Hennessy has his best friend Michael whom he’s known forever. I liked that Michael, and his wife Vee, treat Hennessy with such respect and caring.

Finally, there’s the Soup Crew.  I don’t want to give too much away but I once used to take the bus in the morning and there were five of us, including the driver, and we were a hoot.  I laughed every morning on the way to work and it was a great way to start my day.  Jordan and Hennessey’s daily antics draw the notice of an amazing group of people who become invested in the success or failure of their relationship.  No pressure, eh?

One more thing I need to address.  If swearing offends, either put on your grown-up underwear or maybe considering skipping the book.  As Jordan says to Hennessey when they first meet: “Sorry about that.  I tend to babble a lot when I’m nervous.  And swear.  Well, I say fuck a lot even when I’m not nervous.  I don’t have Tourette’s or anything.  I just like the word fuck.  The noun and adverb, even the adjective, no the verb obviously because I’m asexual.  Apparently. So there is definitely no actioning of the word.”  As someone who swears a lot, I enjoyed the byplay and banter with Jordan’s favourite word motherfucker.  I think I might have even learned a few new and creative ways to use the word.

I loved this book.  I loved the explanation about sexual desire.  I respected a group of people who longed to connect emotionally all the while knowing they weren’t interested in having sex.  I thought the portrayal was touching, vivid, and worthy of the characters.  I highly recommend this book.

She is many things: a mother, a wife, a sister, a writer. She has pretty, pretty boys who live in her head, who don’t let her sleep at night unless she gives them life with words.

She likes it when they do dirty, dirty things… but likes it even more when they fall in love.

She used to think having people in her head talking to her was weird, until one day she happened across other writers who told her it was normal.

One thought on “‘Upside Down’ by N.R. Walker #LGBTQ+ #Duo-Review #Asexual #NewRelease”