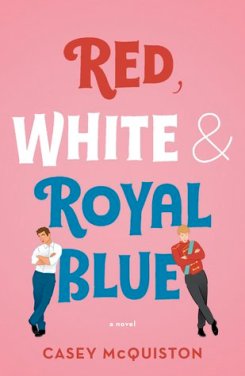 First Son Alex Claremont-Diaz is the closest thing to a prince this side of the Atlantic. With his intrepid sister and the Veep’s genius granddaughter, they’re the White House Trio, a beautiful millennial marketing strategy for his mother, President Ellen Claremont. International socialite duties do have downsides—namely, when photos of a confrontation with his longtime nemesis Prince Henry at a royal wedding leak to the tabloids and threaten American/British relations.

The plan for damage control: staging a fake friendship between the First Son and the Prince. Alex is busy enough handling his mother’s bloodthirsty opponents and his own political ambitions without an uptight royal slowing him down. But beneath Henry’s Prince Charming veneer, there’s a soft-hearted eccentric with a dry sense of humor and more than one ghost haunting him.

As President Claremont kicks off her reelection bid, Alex finds himself hurtling into a secret relationship with Henry that could derail the campaign and upend two nations. And Henry throws everything into question for Alex, an impulsive, charming guy who thought he knew everything: What is worth the sacrifice? How do you do all the good you can do? And, most importantly, how will history remember you?

Why I read this: I have read so many reviews and other posts talking about this book that I had to check it out.  Also, I have always wanted an MM Prince romance, wondering what he would be forced to do because he was a Prince.

First let me start by saying I highly recommend this and hope everyone will read this book. It’s very applicable to today’s political world. *Note* This story does take place in a somewhat altered reality to ours, where the 2016 election is not won by you know who but instead won by a woman:

“[Alex] was born in the hill country of Texas to the daughter of a single mother and the son of Mexican immigrants, all of them dirt-poor…” ” ‘It ever make you laugh to think how much this pisses assholes off,’ [Oscar] says (Alex’s father), gesturing to encompass the whole scene: two Mexican men putting their feet up on the railing where heads of state eat croissants.”

Also, the Royal Family is not comprised of those in reality – they are made up royals who do share the same history (as far as I know) to the real royal family.

It’s funny because I have always wondered about the royal family and what would happen if one of the princes turned out to be gay – would they be allowed to be gay? Would they be forced in to a marriage to a woman for public purposes, but allowed to be themselves behind closed doors? I think the only way we will find out is if a.) someone in the royal family comes out, or b.) someone from the royal family responds to this story and makes a statement about what would really happen. But, I at least have my fictional accounting of what would happen and really, that’s all I ever wanted. I wanted an HEA for the gay royal and I never dreamed it would be with the first son of the US. That was a bonus.

Now that I have rambled on enough, lets get to the meat of the story. Alex is the first son to the first female US President. He is smart (scarily so), has political asperations of his own, and has no idea on a conscious level that he likes men in that way. With 20/20 hindsight, Alex is able to see what he didn’t allow himself to focus on when he was younger, but that’s not truly important to the story. The story is about Alex and Henry, possibly the two most famous bachelors in the World. And after a scuffle that results in a lost wedding cake, the two must fake a friendship to save face. And they learn their feelings for each other are more then frenemies – they are deep and real, and a 1000%.

I loved this story from the start. The characters felt real, and their love for family and country, doing the right thing, wanting to be happy, worrying about their future and their career aspirations – it was so very…insides melting. And then there is the snark. OMG, Alex and his snark is hilarious. He thinks Henry is a royal robot who doesn’t know how to let loose, or do anything but toe the royal line. As they spend more time together because of their “friendship” Alex sees a side to Henry he didn’t know existed, opening his eyes to possibilities. It was beautiful to see.

When Henry and Alex share their first kiss, it’s glorious. When they share their 2nd kiss, it’s all fireworks and teeth and rough. And I LOVED it! Then we are shown several chapters of them trying to find time to be together, and also not give themselves away. They do have help.

When their secret is outed, it’s a very big deal and very close to the Presidential election. Alex and his family work hard to fix the hacking and stealing of Alex’s emails from their Private Email Server, and also save Alex and Henry’s relationship. The whole story behind the hacking and the other half to that felt very much over the top and unnecessary. Hacking of emails, I can get behind that – the storyline behind it – not so much. Very overly dramatic when there is enough drama already.

Aside from that, I have no issues with this story and would love to see more of these characters. Even though this is a fictional telling, I think the ending is probably reality. The world unites to celebrate the love between Henry and Alex. Yep, they are gay and out and proud and in love – and the world showed they supported them and loved them. If this were to ever happen for real, I believe they would be supported.

I didn’t want to put the book down and fought sleep several nights in a row to try and get more in. Henry and Alex are sweet together and I loved every minute seeing their relationship grow.

Casey McQuiston grew up in the swamps of Southern Louisiana, where she cultivated an abiding love for honey butter biscuits and stories with big, beating hearts. She studied journalism and worked in magazine publishing for years before returning to her first love: joyous, offbeat romantic comedies and escapist fiction. She now lives in the mountains of Fort Collins, Colorado, with a collection of caftans and her poodle mix, Pepper.