Why I read this book: I’ve wanted to try a Lane Hayes book for a while and this one sounded interesting. 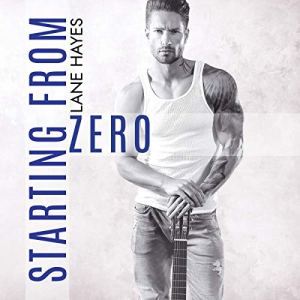 Justin Cuevas is going through a rough patch. A broken relationship, a scandal, and the demise of his band have shaken the aspiring rock star’s confidence. Working two jobs and sleeping on his friend’s sofa isn’t ideal, but Justin isn’t ready to give up yet. With a little luck, he’s hoping to re-launch his music career in LA with his new band, Zero. The key is to stay focused, and not get distracted by his past…or the sexy songwriter he can’t get out of his head.

Gray Robertson has written dozens of hits and worked with some of the biggest names in the industry. But he’s never met anyone like Justin. The younger man is fiery, passionate, and smart. A powerful voice for a new generation. Other than an unforgettable one-night stand and a passion for music, the two men have nothing in common. Or do they? Justin knows the out-of-the-blue challenge to write a quintessential love song is a huge opportunity. And it’s the ultimate test for someone who’s doesn’t believe in happily ever after. When sparks fly, Justin and Gray realize they have a shot something special if they start from zero together. Maybe even love.

What happens when a quickie in the bathroom changes your life?  Justin Cuevas was having a bad day when he met Gray Robertson.  Justin needed someone to help him out and Gray stepped into the role flawlessly.  But the end of the night had Justin leaving and Gray having no way to contact him.  End of story, right?

When circumstances bring the men together there is yet another power imbalance.  Gray is successful in the music business that Justin is so desperate to break into.  Gray has the ability to give Justin a leg up but pride prevents Justin from accepting the help.  Justin is stubborn.  He is easily distracted and struggles to keep his part time jobs as well as practicing with his new band, Zero.  Gray’s offer of studio time comes with no strings and Justin finally decides a little help would be okay.  His bandmates are skeptical but willing to take the gift and they try to make a go of their music.

Gray knows Justin is special but struggles to help the young man realize it.  He’s older and more successful, so guiding Justin comes naturally to him and sometimes he has to fight taking control of Justin’s chaotic life that is, at times, spinning out of control.  Justin has a lot of baggage but it doesn’t faze Gray.  Very little does.

The crux of the plot is that Justin needs to write a love song for a big movie.  It’s a great opportunity for an up and coming musician but he’s not a big fan of love.  His family certainly didn’t have any and the one serious relationship he had ended up burning him badly.  He played a big role in the demise, but the fallout was spectacular.  So…writing a love song?  For a cynic, it’s a bad bet.  But he can’t give up this chance so he tries.  Gray has written many songs and although he could guide Justin, he wants the young man to succeed on his own.  Solution? Show Justin that love does exist – in many forms – and that it might be worth taking one more chance before giving up for good.

I could relate to Justin and his floundering to find a place in the world.  His music means everything but he can’t make a living at it.  His pride prevents him from embracing Gray’s help whole-heartedly and I understood that.  Who doesn’t want to succeed on their own without perceived or real help from someone else?  Gray handles the situation with the maturity he’s worked hard for.  He manages to restrain the urge to fix everything that is wrong in Justin’s life.

This is a great book about how love is far more complex than just “I love you” and that true love involves risking one’s heart and soul.  The book was narrated by Michael Pauley who is one of my favourite narrators.  He did a great job again, meeting and even exceeding my expectations.  Great job and I can’t wait for the next book in the series.

Lane Hayes is grateful to finally be doing what she loves best. Writing full time! It’s no secret Lane loves a good romance novel. An avid reader from an early age, she has always been drawn to a well-told love story with beautifully written characters. These days she prefers the leading roles both be men! Lane discovered the M/M genre a few years ago and was instantly hooked. Her first novel was a finalist in the 2013 Rainbow Awards and her third received an Honorable Mention in the 2014 Rainbow Awards. She loves travel, chocolate, and wine (in no particular order). Lane lives in Southern California with her amazing husband and the coolest yellow lab ever in an almost empty nest.