*** Be sure to check out the Giveaway for your chance to win an ebook copy of ‘Hexxed’ or one of Shannon West backlog ebooks. Good luck ❤ *** 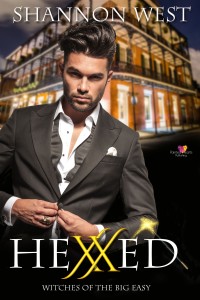 Self-exiled to New York for the past two years, Nic Gaudet never planned to return to New Orleans. But with the mysterious death of an old man named Abel Delessard, a member of a family of Cajun witches who were his own family’s greatest enemies, it seems he has fallen under suspicion of murder. He’s been accused by none other than the man’s grandson—and Nic’s former lover—Thibeau Delessard. Nic is furious and travels to confront Thibeau and his family in an official capacity—Nic is a member of the Legislateurs, the governing body of all the magic practitioners in the Big Easy, both the living and the undead. What he doesn’t expect is for all his old feelings for Beau to come rushing back in the moment he sees him again.
Thibeau Delessard had an excellent and heartbreaking reason to break up with Nic two years earlier, but it hasn’t been anything he could tell him until now. Secrets and lies separate them now as they did in the past, but soon, they find themselves back in love and back in danger. Someone is trying his best to use magical spells and hexes to kill Thibeau. Evil pervades not only the French Quarter, but also the old Creole style house where the Delessard family lives. A web of plots is closing around Thibeau and his family, and if Nic can’t find a way through it—and defeat the warlock magic with his own–they’re all going to die. A cursed diamond, an evil book of spells and danger surrounds them on all sides in this city where the veil is thin between this world and the next, and most especially, after dark.

“I’m sorry,” Beau said, after a moment of us just staring at each other. “I…I appreciate everything you’ve done for me. But-but this is too crazy…this is… He cleared his throat and tried to cough. “This is… Shit!” he started to cough again, and his eyes got wide. He stopped talking and tried to swallow and then clear his throat again forcefully. He made a harsh noise in his throat and started gagging.  He looked up at me, his eyes panicked and staring. “C-can’t bre…c-can’t …” he managed to say around lips that were rapidly swelling. I pulled him close to me and he opened his mouth, displaying a tongue that was swelling right before my eyes and turning dark purple.

“N-Ni…!” he tried to say my name around his distorted tongue, his eyes rolling back in his head in sheer panic.

“Try to breathe through your nose!” I yelled at him and pushed more magic at him. His face was rapidly turning blue and his eyes were bulging.

Taylor looked shocked too and totally baffled for a second, but fumbled for his ballpoint pen and shoved it at me with trembling hands.

“Open it and take out the refill! Hurry, damn it! My magic’s not working!”

I pushed Thibeau to his knees and felt for the opening in the membrane below his Adam’s apple before the firmer cartilage of his trachea began. He was clawing at me, in a desperate panic, because his airway was completely closed off now by his bulging tongue and horribly swollen lips. I had found the opening, so I managed to look him in the eye for a fleeting second.

Taylor passed me the pen and I held tightly to Beau, pulled my arm back and jabbed downward with the hollow point of the pen directly into his throat. The pen would act as a tube to keep the opening clear until a more secure airway could be maintained, or until I could get him the fuck out of this house. It was a ludicrous kind of tracheotomy, and I was a little shocked it actually worked. But it was the best I could come up with on short notice and I thanked all the TV I watched as a kid for giving me the idea. This place was too drained of power for my magic to do much good, and besides, I didn’t want to strip myself completely before we got the hell out of there.

Taylor caught Thibeau’s hands and held them down as he tried to scream and clutch at the tube sticking out of his throat, but gradually, as we held onto him, he realized he wasn’t suffocating anymore and though he was still freaking out, he managed to be more still and let us help him. Blood was trickling down his neck and staining his chest again, but that was the least of my worries.

I swept him up in my arms for the second time that night and started for the door. My eyes met Taylor’s, and he held his Beretta ready, clearly intending to shoot anyone or anything we might encounter on the way out of this mausoleum and sort it all out later on. “Bring that hex with us. And Taylor…”

This book is packed with suspense and mystery and adventure and romance and… I really enjoyed all the elements that came with this story.

One of my all time favorite tropes is the broken character. The person that gave up everything to save someone they loved and came out the other side wreaked, in pieces *le sigh*.

Thibeau is that character. Scorned and hated by the man he loved more than himself, put through all the layers of Hell to protect that man as well as his family. I really felt for Beau.

Nic captured my heart right away too. He had every reason to feel wronged, but sometimes things aren’t quite what they seem. He still can’t stop himself from feeling something for his former lover and I was touched by how gentle he could be towards Beau. These guys can’t stop their feelings for each other. It was like they were soul mates, the chemistry between them was off the charts and it was a delight to see them find their way back to each other.

I’m also a huge fan of books that have magic in them. I was not disappointed. There are hexes and really big issues with magic and they have to find unique ways to work with what they have.

This story kept me on the edge of my seat from start to finish! I enjoyed going on this adventure with Beau and Nic and can’t wait to continue the series. Each book is written by a different author so while it has the same theme, we get completely different voices and perspectives for the characters.

You must be 18 years or older to participate in this giveaway. Void where prohibited. Etc.

Shannon makes her home in Georgia and North Carolina with her husband and family. She believes that love is love, no matter the gender. Shannon mostly spends her days at the keyboard trying to elude housework, which stalks her relentlessly.