Erryn reviews ‘Always Mine’ by Sloane Kennedy. The ebook is 256 pages and was published June 17, 2019. The audiobook was released on July 12, 2019 is 7hrs and46 mins and narrated by Michael Pauley.

Why Erryn read this book: I adore Sloane Kennedy and was looking for a good read. 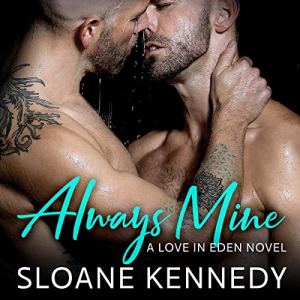 I had one reason for never going back to the small town I once called home, but I never guessed it would be the same one that made me want to stay….

Brooks
I grew up in the small town of Eden, Wyoming, but never really felt like I fit in.

Until I met the one boy who changed all that.

When we were kids, Xavier Price understood horses, but somehow, he got me too. He’d made me feel like I wasn’t just the overdressed, too sensitive 15-year-old geek who loved math and didn’t always say the right thing. But all that changed the night he threw my trust back in my face and betrayed my family in the worst kind of way.

And while I’m back in Eden to make sure my uncle’s horse ranch is operating in the black, the one thing I know I won’t have to deal with is the man who’d been on the verge of stealing my heart 10 years ago.

Because Xavier Price is still in prison for what he did and even if he weren’t, he wouldn’t be foolish enough to show his face in Eden ever again.

That’s what returning to Eden after ten years behind bars feels like. But it wasn’t like I had a whole lot of choices. And it wasn’t like I was going to be handed any decent job offers, let alone my dream one of working with horses.

But that’s exactly what happened and now that I’m foreman of Black Hills Ranch, I’m not letting this job go for anything.

Not even the spoiled little rich kid I’d thought was different when he’d glommed onto me 10 years ago.

I have no doubt Brooks Cunningham didn’t wait long to move on to bigger and better things the second my jail cell was locked behind me, and that’s just fine by me. I’d been wrong about the sweet, emotional boy who’d had a habit of wearing his heart on his sleeve anyway.

Except fate has decided to have another go at me by tossing Brooks right back into my sometimes too small world. Gone is the scrawny, stars-in-his-eyes nerd who used to do math problems just for fun. In his place is a gorgeous specimen of a man who thinks he can go toe-to-toe with me and once again destroy everything I’ve worked for.

Xavier and Brooks are only a year apart in age but the difference has always felt much larger.  When Brooks was 15, he’d been an immature kid who struggled to fit in on a ranch.  He wore trousers and didn’t know how to ride a horse.  Then he met 16-year-old Xavier and he found someone who could not only teach him to ride, but someone who didn’t judge him for his love of math.

Then comes the night when everything changes.  Both men have very different perspectives on what happened that fateful night, but their already divergent lives took completely different paths and both men believed they would never see each other again.  Xavier went off to prison and Brooks moved away from Wyoming, back to the big city.  Each was hurt because of the perceived actions of the other and the separation seemed permanent.

Ten years later, fate has other plans for the men.

Brooks’ uncle Curtis is running the ranch but things aren’t going well.  Brooks, the math-oriented nephew with business experience, heads to Wyoming to see if he can help his uncle get back into the black.  The last person he expects to see is Xavier.

Xavier did his time and although he wanted to put Wyoming in the rear-view mirror, obligations have brought him home.  Desperate, he’s obtained a job at the old ranch working for Curtis, a man who doesn’t hold a grudge.  Too bad his nephew doesn’t feel the same way.

When the men first see each other, ten years of resentments bubble to the surface.  Assumptions are made and neither man wants to believe he might be wrong.  Only when one needs desperate help do they come to an understanding – or sorts.  There are a lot of hurt feelings in this book and neither man wants to back down – until they realize their stubbornness might be standing in the way of something much better.

Although I enjoyed the clashes, I preferred the loving.  These two men were perfect for each other ten years ago and even more so now.  And although they’ve hidden themselves away, part of them longs to be with the other.  But neither man is out, so there’s that to contend with as well.  Lessons of the older generation become clear and Brooks and Xavier realize they have to find their own truth.

This is a Sloane Kennedy book so there’s a bit of violence, a touch of angst, and lots of sexy times.  I loved how Xavier discovered what Brooks enjoyed and instead of shaming him, showed him it was okay.  There’s a lot to be said for someone who takes the time to teach.  So, yeah, there are riding lessons as well.  Of every variety.

Michael Pauley again helms this book and I’m so glad.  He gives just the right note to each man, differentiating them well.  He is one of my favorite narrators because he’s so consistent and always does a great job. I also like how the next book has been set up and I can’t wait to see where this series goes.  Another great read.

Although Sloane Kennedy always dreamed of being a writer as a teenager, she didn’t take the plunge until March of 2015 when she released her first novel as an independent author. Since then, she has released more than 20 books including the Amazon best-selling “Barretti Security” series, “Finding” series, “Pelican Bay” series and “Protectors” series. While she initially began writing M/F romance, she found her true passion writing gay romance and nearly all of her most recent releases reached the #1 spot on Amazon’s Gay Romance bestseller list and several have made it to Amazon’s overall bestseller list. Sloane was born in Germany and grew up in Virginia and Wisconsin. Although she currently lives in Wisconsin, the place where she has always felt most at home is Seattle and many of her books take place in the Emerald City. Although she is unmarried, a menagerie of 2 dogs, 3 cats, and 2 chickens keeps her busy enough and 3 young nieces take care of the rest of her free time. Sloane loves being able to share her passion for romance with readers and she is truly humbled by all the support she’s received from fans and fellow authors alike.