Erryn reviews Test of Valor (Valor #2) by Keira Andrews, published April 26, 2018 by KA Books, 244 pages. The audiobook was released on August 13, 2019, is 8hrs and 14mins by Tantor Media. The audio is narrated by Iggy Toma. A copy was provided in exchange for an honest review.

To read Erryn’s review of the audiobook Valor on the Move here.

To read Melissa and Dana’s review of Test of Valor, click here.

Why I read the book: I loved book one and wanted to see where Rafa and Shane wound up. 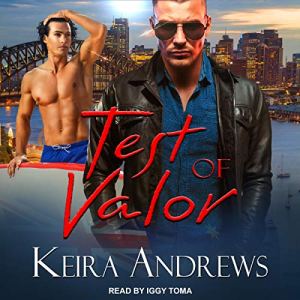 They’re free of the White House, but can their forbidden romance survive in the real world?

With his father no longer president, 22-year-old Rafa Castillo can finally be with ex-Secret Service agent Shane Kendrick. Shane’s given up his career for Rafa, a move his fellow agents question the sanity and morality of. Eager to get away from the questions and judgment, Rafa and Shane are building a new life together in Australia. Though Shane struggles with nightmares and his overprotective instincts while Rafa fights his own insecurity, they love each other more than ever.

Now they just have to get through a visit from the former president and first lady.

Rafa’s parents certainly don’t approve of his romance with 40-year-old Shane, and they’re determined to make him see reason. They don’t see how their son could possibly be happy settling down with an older man, and they question Shane’s motives. Shane and Rafa just want a normal life together – but when they must suddenly battle for survival, they fight to prove their fierce love can withstand any threat.

Buy it here:  AUDIBLE | AMAZON.COM  |  Add it to Goodreads

Test of Valor picks up a few months after Valor on the Move. Rafa has settled into life in Sydney and is now not just the former US president’s son.  He’s his own man and happily in a relationship with the man he loves.  Shane has recovered from his departure from the Secret Service and is now building a security business.  After all those years of being at someone else’s beck and call, he now calls the shots.  He’s also happily ensconced with Rafa in a little one-bedroom bungalow not far from the beach.  Surfing and hanging with his hot younger boyfriend?  Life is perfect.

Or so it seems.

Rafa might be living incognito, but Shane still worries about the high profile he has.  Shane worries a lot.  He’s also still having nightmares from when Rafa was kidnapped and even though he was able to save the younger man, his mind won’t shut off.  Not wanting to worry Rafa, he keeps the nightmares a secret.  Rafa, for his part, is adjusting well.  When Shane goes out of town, he spends a night alone in their house – the first night he’s ever spent alone in his life.  I can’t imagine having been so sheltered.  He survived the scrutiny of being the first son and is now preparing to study at the Cordon Bleu in Sydney.  And some of the recipes?  Had my mouth watering.

It can’t be all chocolates and roses, though.  The problem?  Rafa’s parents still haven’t accepted his relationship with Shane.  After all, he’s 22 and Shane is over 40.  Shane’s had plenty of experience while he’s Rafa’s first.  The former president and first lady just don’t understand why their son is willing to tie himself down at such a young age.  With such an older man.  There was some furor when the relationship became public – the taboo nature of Secret Service agent and protectee playing into the picture, but Rafa knows what he wants.  He wants Shane.  But he also loves his parents so when they visit Australia, he puts on his big boy pants and prepares to face them.  Some habits die hard, though, and he falls into the pattern of wanting to please them – even going so far as to alter his appearance hoping that will help him.

It doesn’t.  His mother is as unreasonable as always and, personally, I wanted to do her serious harm.  For a mother who claims to care about her son, she sure has a funny way of showing it.  But we all know parents like that – the ones who can’t accept it when their child grows up and finds their own path.  His mother’s machinations also cause a fight between Rafa and Shane and, truthfully, my heart hurt.  I really wanted these two to make it.

As with the first book, something very dramatic happens that completely changes the equation.  In the first book it was Rafa’s kidnapping and although I’m not going to give much away, the event in this book had my breath catching as I didn’t see it coming and it was heart-pounding.  Another opportunity, though, for people to show their true colors and I saw a side of some characters that I hadn’t predicted.  There are also some moments of levity.  Like when the first lady says, “Jimmy Choos aren’t meant for swimming.”  Uh, she’s probably right on that count.  After the traumatic event is over, there’s a reckoning of sorts and it even goes as far as an entente cordiale.

Iggy Toma narrated this book as well and I remember why he’s one of my favorite narrators.  His voices are just perfect and his Australian accent wasn’t bad either.  I’m almost sorry to see the series end but I know this couple will stay with me for a long time.  I can definitely recommend the book.

After writing for years yet never really finding the right inspiration, Keira discovered her voice in gay romance, which has become a passion. She writes contemporary, historical, paranormal and fantasy fiction, and—although she loves delicious angst along the way—Keira firmly believes in happy endings. For as Oscar Wilde once said, “The good ended happily, and the bad unhappily. That is what fiction means.”