Why I listened to this audio:  I enjoyed the Forbidden Desires series. 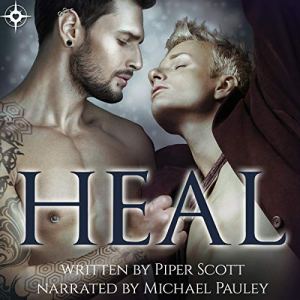 From the ashes of his past rises an alpha ready to take what he wants.

Professional Dom Cedric Langston isn’t afraid to bring an omega to his knees, but he’s vowed to never let one into his heart. After a tragic event five years prior almost destroyed him, he can’t risk getting hurt again. With a prestigious career shift on the horizon, it’s safer to lose himself in work than to open himself up –

…until he runs headfirst into an omega who makes him never want to hide away again.

Twisted by cruel subservience at a young age, an omega exists ready to please.

Gabriel Lowe is free from the horrors of his past, but his heart refuses to move on. He’s lost his purpose, his place in life, and the man he thought would give him a family. The world is a harsh place for a broken omega, and when his rehabilitation therapy fails and he returns to the only family he has left, it gets harsher.

He’s told he will be entrusted to an alpha – a professional Dom whose kindness and compassion Gabriel can’t understand.

But when what should have been nothing more than a job ignites into blistering desire, Cedric and Gabriel are faced with a choice: cling to the demons of their past, or give in to what they’ve found in each other – a way to heal.

This novel alludes to sensitive topics some listeners may find difficult, including abuse, violence, and human trafficking. However, a happy ending isn’t only promised, it’s guaranteed.

Buy it here: Audible | Amazon | Add it to Goodreads

Gabriel Lowe has had a rough go of it. Ensnared in a sex trafficking ring at a young age, he trusted the wrong person and wound up being victimized repeatedly for years.  Even when his time in the brothel ended, the nightmares continued.  He was put in a rehabilitation facility, but nothing helped.  Finally, in desperation, he reached out to his brother for help.  Adrian wants to help his brother but he’s got a job, a husband, and a baby.  He’s also not really equipped to deal with the intensive help Gabriel needs.  If professionals failed, how’s a brother to step in and take over?

The solution presents itself in the form of Cedric Langston.  Cedric is a professional Dom with a lot of experience under his belt. He’s young, I mean really young.  Twenty-five-year-olds can be cocky, but sometimes they don’t have the life experience.  Because of a heartbreak when he was younger, Cedric has a maturity that carries him.  When presented with the opportunity to work with Gabriel, he seizes it.  Initially he sees it as a stepping stone to something better, but he quickly begins to care for the damaged omega.  Cedric is a champion of Omega rights, always believing in equality.  When he learns of how Gabriel was treated, he’s incensed.  When he sees an opportunity to help the younger man heal, he takes it.

Cedric’s tragic past is slowly explained and it hurt my heart – these are two damaged men, to be sure.  It’s just that time has allowed Cedric to come closer to acceptance.  But when danger comes calling, both men are drawn into a potentially lethal snare and they have to trust each other to survive.  Have to work together to defeat evil.

There’s a lot of meat in this book for those readers who love damaged men who are trying to put their lives back together.  Gabriel has some real self-esteem issues.  When reflecting on his situation, he thinks:  How was he supposed to take care of fixing his problems when he wasn’t even good enough to get Sir to stay?

Sir is Cedric, and he’s removed himself from the situation because he realizes he may not be what is best for Gabriel.  Omegas have special needs and as empathetic as an Alpha might be, there are things that are even beyond their ability to tend.

In a moment of introspection between omega brothers, Adrian says: “I know how heartbreak feels.  It’s hollow, isn’t it?  Like the solid construct you thought would be the pillar for the rest of your life turned out to be made of cardboard and there’s a storm on the horizon.” Oh my God, I think that broke me a little bit.  I wanted Gabriel to get his happy ending, but man, did he have issues to work through.

Michael Pauley is a fantastic narrator and I was happy to listen to another one of his brilliant performances.  I hadn’t listened to the previous books in the series but wasn’t lost at all.  I may, in fact, go back and listen to the others.  Adrian’s story in particular.  I have to say, I enjoyed this book a lot.

Piper Scott debuted as a trio of authors looking to write together for fun. Their collaboration led to three novella-length books (Love Me, Save Me, and Keep Me,) before life sent them in different directions, leaving just one author with an omegaverse plot bunny that wouldn’t leave her alone. Obey was born several months later… but the plot bunny never left–it multiplied.

Left to her own devices, Piper Scott writes scorching but heartfelt contemporary omegaverse romance about men you can’t help but fall in love with.