We are happy to have John C. Adams here today with this exclusive interview celebrating the release of their latest novel, ‘Dagmar of the Northlands’. 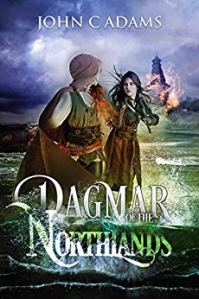 Dagmar of the Northlands is edited by professional editor E S Wynn-Rubsam and features a powerfully evocative cover from Fiona Jayde Media.

When her stepfather Konung Thorlak of the Northlands dies, the jarls rally round Dagmar’s half brother Njal and make him their new ruler. Dagmar is disturbed by their ability to do so, when Thorlak fell at Njal’s own hand.

The new konung orders a raid on Gortah van Murkar’s island territory of Orkna to deflect attention from criticism of his rise to power and his treatment of his sister Yeen. Dagmar puts her yearning for romance with close friend Frakkok Warmhearth to one side long enough to join the raiding party, but her sister Ragnhild’s pregnancy from their mysterious house guest Jon, rumoured to be the human form of the Northlands’ Sea God Grunn, is also weighing heavily on her mind. Dagmar’s thoughts often drift back to her homestead, Barnahus, the aptly named House of the Women.

It isn’t long before Njal is proving himself unfit to lead, and the Men of the North are running amok. Dagmar and her cousin Magnus Broadchest step up, leading the raid on the crofters of Orkna to plunder whatever pitiful treasure the islanders have hidden away. They also do their best to rally the Men of the North’s allies to attack the island’s capital, the towering stronghold of Castle Longhope, before Gortah can get wind of their arrival and send reinforcements to hold this distant outpost of his massive empire.

Dagmar longs to return home and begin a relationship with Frakkok and to ensure that Ragnhild comes safely through the birth of her son. First, she must stiffen the resolve of the Men of the North to fight as a disciplined band within the coalition of forces the Gods have amassed to assist the Northlanders in taking Castle Longhope. With Magnus injured in the earlier raid, and his wound festering, returning home to Barnahus seems further away than ever for Dagmar.

Meanwhile, in his opulent capital Zwaarstad, Gortah awaits the return of his wife Queen Dextra of Aspatria and her much younger other husband Lord Ludwig Berg. The king and queen have been apart for a year following the death of Dextra’s baby son, Crown Prince Aelred of Aspatria, but Gortah has formally demanded her attendance at his fiftieth birthday celebrations, amid continuing speculation in Murkar and Aspatria about the stability of the royal marriage.

Just as Gortah hopes to celebrate Dextra’s return in peace, the Eirans gather an immense warhost and ride for the border with South Eira, Gortah’s possession across the Silent Sea. The commander at Fort Belshan sends urgent word that reinforcements are needed, and Gortah’s youngest son Prince Eugene leads those forces into battle. However, Eugene’s thoughts are clouded on and off the battlefield by tempting visions of the King of Eira’s youngest daughter, Princess Emer o’Eira.

Is the delightful and playful spirit who visits Eugene in the night hours at Belshan a true likeness of Emer in beauty and good nature? Eugene becomes more determined than ever to meet the princess in person and find out. But Emer’s father Domhnall o’Eira is determined that any match with the Murkan prince will be with his eldest daughter, Briana, even if it means breaking her betrothal to childhood sweetheart Chieftain Jarlath o’Cruach.

The return of Benedict Dartelend gives Gortah the thrill of seeing his old lover again after thirty years, but it is tinged with sadness and regret that Benedict has come home to Murkar after decades of ill health to say goodbye. Gortah’s old adversary for Benedict’s affections Theydon Kleermaker travels to Zwaarstad with Benedict, but after so many years of estrangement and tension, Benedict’s passing brings them closer.

Get your copy here: Amazon

Rainbow Gold Reviews caught up with non-binary writer John C Adams to find out more about their main character’s romantic development in their brand new fantasy romance novel ‘Dagmar of the Northlands’.

RGR: ‘Dagmar of the Northlands’ is a Nordic-themed fantasy novel, and it features an empowered and confident young woman who knows her own mind.

JCA: Dagmar’s really inspiring. But she’s had alot to contend with growing up, and in alot of ways that has shaped her as a person. Her mother died when she was very young, and she has a sister Ragnhild who is only a year or so younger than her. But her father Olaf died when she was a tiny baby, and Ragnhild wasn’t even born yet. After that Dagmar’s mother married her brother-in-law Thorlak, in accordance with the tradition of the Northlands, and he became konung after Olaf. They had two children together, so Dagmar has a half-brother Njal and a half-sister Yeen, a couple of years younger than she is.

RGR: But Dagmar’s come through all those early challenges strong and self-reliant?

JCA: Oh yes. Dagmar’s very resilient. She got along quite well with her stepfather, but she still misses her mother terribly. She doesn’t like her stepbrother at all. She thinks him a whiny little weasel and can’t really understand why the Men of the North accepted him as their new konung, especially as there’s quite alot of chatter around about how Njal knifed his own father to take the crown. However, she gets along really well with her sister Ragnhild, who lives with her, and she feels really sorry for their half-sister Yeen, who Njal treats appallingly.

RGR: And Dagmar has her own farmstead and works the land herself?

JCA: That’s when she’s not sailing off on another raid with her fellow Men of the North! She’s a very active woman and she owns a farmstead just outside Konungsborg called Barnahus. In Old Norse, this means ‘the house of the women’. There are one or two men working the farm, but mostly the community at Barnahus consists of women and that’s something Dagmar is very comfortable with. She enjoys ploughing, growing fruit and vegetables, fishing and raising livestock.

Frakkok Warmhearth is Dagmar’s love interest. She came to Barnahus a year ago as a runaway slave, and Dagmar bought her from her owner and freed her. Since then, Frakkok’s been in a relationship with another woman, but that’s broken up now and Dagmar’s confused about the feelings she’s experiencing for Frakkok.

RGR: In the fictional culture you’ve created will Dagmar get to decide her romantic future for herself?

JCA: She might, but only after facing down some pretty horrible challenges. Now that Njal is konung, he’s got the power to decide whom his sisters marry. Dagmar has had marriage offers from Bjarni, a yeoman she’s known all her life, and Khan Nicholai of the Albins is looking out for a wife. Njal is pretty keen to establish an alliance with the Albins, so she’ll come under alot of pressure there.

Dagmar’s feelings for Frakkok are very strong, and are sexual as well as romantic. In short, she’s deeply in love but doesn’t really know it yet. For all Dagmar’s a profoundly confident young woman when it comes to sticking up for others, sailing off in raiding parties and running the farmstead, she’s very shy around personal matters. It’s going to take all her confidence to seize matters head-on once she’s made sense of what it all means.

And Dagmar has non-romantic challenges to deal with, too. Under Njal’s poor leadership the raid on Orkna goes awry, and they end up laying siege to the island’s capital Castle Longhope. Let’s hope the Gods smile on those endeavours, or they’ll be sailing home empty handed. And sooner or later Gortah van Murkar’s going to hear that the Men of the North have been on Orkna, and he claims the island as part of his empire, so the most powerful man in the world will be wanting a word with the Northlanders about that before long.

RGR: What are you working on now?

JCA: I’m polishing up my next novel before it goes to my regular editor. It’s a horror novel, the sequel to ‘Souls For The Master’. I’m also part of the way through the follow up to ‘Dagmar of the Northlands’, which is set in Albina and features a shapeshifting woman who can take the form of a dog.

‘Dagmar of the Northlands’ by John C Adams is out now on Kindle and Smashwords.

I am a non-binary writer and reviewer of fantasy and horror fiction. I am a Contributing Editor with Albedo One Magazine and a reviewer with the British Fantasy Society and Schlock! Webzine. My fantasy novel ‘Dagmar of the Northlands’ is out now on Kindle and Smashwords. I have had short fiction published in many anthologies from small presses and in a number of magazines, including The Horror Zine. I also have a Postgraduate Certificate in Creative Writing from Newcastle University.