NOTE: We were provided a copy of this in exchange for an honest review. 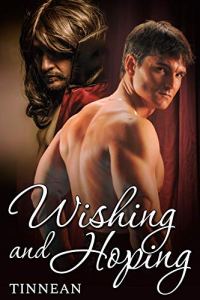 Ioan Mic, the half-blood grandson of the vampyree king, is eagerly awaiting his eighteenth birthday, when he’ll finally be able to be with Daniel Small, the American vampyree he’s loved for the past four years. Although vampyrees are notoriously promiscuous, Ioan’s refused sex with all who offered — he’s willing to wait. But when Daniel arrives at the party, he’s accompanied by a wife, leaving Ioan devastated.

Shandor, a wolf shifter — he refuses to call himself a werewolf — loves the young duke, but years before, he was given the task of keeping Ioan safe, so he tucks his feelings away.

Ioan’s twin decides the two need a push and encourages them to enroll in an online dating service. Unbeknownst to either man, he sees to it their responses make them perfect for each other. Because anyone can see they are.

The problem is will Ioan and Shandor ever see that?

Wishing and Hoping was a fantastic read, Tinnean is a new and great author for me. This book will make you fall in love and laugh. Even though Ioan has been in love with another for four years, he doesn’t realize his heart belongs to another till years later.

The characters in this book were wonderful, loving, caring. This book made me and will make you feel all kinds of goodness.

Ioan finds out at his and his twin brother Aurel’s Birthday Celebration that someone started spreading rumors about him. That leads Shandor, the man that has been in love with Ioan his entire life to protect Ioan.

I really enjoyed this book, it had a great storyline. I would highly recommend it.

Tinnean has been writing since the 3rd grade, where she was inspired to try her hand at epic poetry. Fortunately, that epic poem didn’t survive the passage of time; however, her love of writing not only survived but thrived, and in high school she became a member of the magazine staff, where she contributed a number of stories
It was with the advent of the family’s second computer – the first intimidated everyone – that her writing took off, enhanced in part by fanfiction, but mostly by the wonder that is copy and paste.
While involved in fandom, she was nominated for both Rerun and Light My Fire Awards. Now she concentrates on her original characters and has been published by Nazca Plains, Dreamspinner, JMS Books, Wilde City, and Less Than Three Press. She has also self-published a number of books, including the Mann of My Dreams series and Best Laid Plans.
Her novels have received honorable mention in the 2013, 2014, 2015, 2016, and 2017 Rainbow Awards. Two of the 2014 submissions–Pick Up the Pieces and Foolish Me–were finalists, and a 2017 submission, Home Before Sundown, was runner-up in the historical romance category.
A New Yorker at heart, she resides in SW Florida with her husband and three computers.
She can be contacted at tinneantoo@gmail.com
Dreamwidth: https://tinnean.dreamwidth.org/
Facebook: https://www.facebook.com/Tinnean
and is @tinneantoo on Twitter
If you’d like to sample her earlier works, they can be found at http://www.angelfire.com/fl5/tinnssinns/Welcome1.html .