Julia McBryant is here today at Rainbow Gold Reviews to share a special excerpt/prequel to her next release of ‘Beautiful Boys’ that will be available November 8, 2019.

Thanks Julia for this special treat! I know that everyone will enjoy this excerpt and is excited to read ‘Gone Down to Egypt Amory’s Story’ ❤ 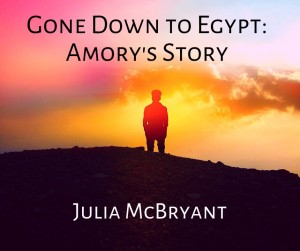 Amory was a wedding night baby, and wasn’t his daddy proud. “The Lord blessed us right away,” he’d tell anyone who’d listen, chest puffed out, face split with a grin in the bright Camden, South Carolina sun. “The Lord blessed Justine and made her fruitful and we humbly accepted his gift with open arms.”

They did what they’d done with every baby. Amory’s mother told him the story a hundred times. They picked a family name to go in the middle: Amory, his great-something grandfather who’d fought in the War Between the States and even signed the Articles of Secession; they’d seen his name once when his mother took them to see a copy at the state archives down near Columbia: Amory Rowell, clear as day. Then when he was born, his father took out the old, old family Bible, flipped the pages, opened it when the Good Lord told him to, and pointed. Joseph, Joseph rejected by his brothers, Joseph the favored son cast out, Joseph sold down to Egypt.

Most everyone just called him Amory, a good ol’ Dixie name. Amory had a Confederate flag on his four-wheeler and the Stars and Bars up in his bedroom. He always had his answer ready, if someone asked: no, he didn’t hate black people. How could you think he hated black people? They had nothing to do with one another. That flag belonged to him, his heritage, no kind of hate, and nothing and no one could take who he was.

When he was eleven, his daddy took him out on the sand-dirt roads in the old blue pick-up. Amory was tall for his age. Daddy slid over. Amory’s stomach flipped: Daddy was gonna let him drive.

“It’s like driving a four-wheeler, only it’s bigger and it’ll do more damage if you hit something, so don’t hit anything. Drive it slow and drive it easy and don’t tell your mother.” He laughed. “And take it out of park first, son. Hit the brake and move the gear shift on top of the wheel. That’s it. Put it into drive.”

Amory locked the old Ford into gear and tentatively hit the gas. His daddy laughed when the truck slammed forward. But Amory evened it out. He drove straight for a long time, then eased it around a turn, guts clutching at the idea of over- or under-compensating. “You’re a natural, son. You got it. Now stop the car.”

Amory hit the brakes and slammed them against the seat. He waited tense for his daddy to yell but he laughed and laughed and flipped on the radio instead. “Sweet Home Alabama” blasted from the speakers, right from the beginning, just perfect, the pines rising around them, fire ant hills the size of toddlers, the smell of the forest, the dirt and the dust, and the summer heat sweating down their foreheads. “You try it again. You try it again from the beginning, Joseph Amory, you got it.” Daddy leaned back on the Indian blankets that covered the stuffing coming out of the seats. “You got it. You’re a good boy.”

When Amory sung solo, the whole church stopped. They hardly seemed to breathe for listening. Even the littles stopped fidgeting, and he looked down over the sea of familiar faces, familiar families, and at first he felt the beauty of the moment, the gift God gave through him. Amory became a conduit and lightning rod for grace. Then the guilt dropped down, because he did it for vanity: he loved their eyes on him, loved the stillness of the spotlight on him, the familiar faces hanging on the rise and fall of his voice. He sang “Silent Night” that last Christmas, the year he turned twelve. His favorite sister Melanie squeezed his hand as he stood. He walked up the aisle from his family’s pew and took his place behind the pulpit. The spotlight shone, oh it shone, a sea of faces waiting, waiting expectantly on no one but him. Amory sang it a cappella. He sang it with love and he sang it with beauty, a hymn to his God and a hymn to himself, a gift he could give and a gift he could keep. His suit might be a little worn, but his voice rang through the church that Christmas Eve, and when he looked down at his mother’s face, it shone with pride, and tears ran down it.

He didn’t cry when his father dropped him off at Gage Military Academy in Aiken, three days after he’d caught Amory kissing John behind the barn. His mother couldn’t come. She had to watch the littles.

His father raged the whole drive, Camden to Aiken, almost two hours down I-20. “I won’t have a faggot as a son. No boy of mine’ll grow up to be a cocksucker, so help me god. We thought you were the best of them. We thought you were the good one but the serpent has a way of corrupting even the good, oh the devil can come even to the best of us all, and this is the only way to set you straight boy, you hear me? We can’t have you around the kids and this place, they’ll put you right. They’ll put you right or you’re no son of mine.” And on and on, two hours of it. Amory sat stunned in that same pickup, the Indian blankets on the seats, his bag in the bed. He didn’t need much because they had his uniform waiting for him: one suit is the only clothes they asked, one suit and underwear.

They took him from his father to the barracks: one narrow bunk, one narrow shelf. He learned fast and he learned well. Up at dawn, bounce a quarter off the bed, shine the shoes, five mile runs with a rucksack on his back, never complain, never wish for home, one day at a time. Learn not to think. Learn not to wish. Learn to live in the moment and learn not to dream. The horses made everything better. The ballet made it better. The theater made it better but still: you did it or you didn’t and that was the end.

Freed to Savannah School of Art, he drank. He partied. He fucked guys and he fucked girls and he acted and sang and danced and he thanked god he wasn’t at Gage. So what if he woke to black coffee. So what if he woke on a futon and three-quarters the burners on the stove broke, and he ate ramen half the time. So what if his friends came and went, came and went. Amory found himself in Frog and Toad one night, chugging Modelo with Blue Beckson, his friend who he fucked when the mood struck them both. He saw a party going in the back, a bunch of friends, two sets of identical twins, some girls, a few other guys. They were loud and drunk and kept ordering shots all around. Clearly they knew each other, and had for a long time. Their laughter echoed off the rafters. They started singing once, some kind of school song, and collapsed into helpless laughter. You couldn’t help but notice them.

He turned to Blue. “You ever had friends like that?”

“No.” Blue laughed. “I never stayed in one place long enough. Wish I did. You?”

Maybe one day he could have friends that way. But theater, it never kept you in one place. You had a cast, you had a cast party, and everyone scattered again. You got what you could when you could. Amory used to have his brothers and sisters, his father and mother: people who stayed, no matter what. Blood thicker than water. Heritage not hate. But they had gone anyway. How could he expect others to stay around?

No one stayed around. The red dirt roads had long since gone, the pickup long since died. Joseph Amory had gone down to Egypt but no brothers would come to find him. No Pharoah would pluck him from the dust to interpret dreams.

He listened to the friends partying in the back.

He would give anything to have them.

Amory ordered another Modelo and asked Blue to go home that night.

This prequels ‘Beautiful Boys’ which will release on November 8, 2019.

Julia McBryant lives in the prettiest city in the whole world with her roving nebula of German Shepherds. Southern born, Southern bred, and when she dies, she’ll be Southern dead, Julia loves gold glitter, brand-new pens her children haven’t stolen, and notebooks full of character details.

She also enjoys unicorns, caffeine, and unicorns on caffeine.

When she isn’t writing she’s writing.