Erryn reviews ‘The Pros and Cons of Vengeance (Pros and Cons Book 1)’ by A.E. Wasp. This book was released on January 17, 2019, and is 368 pgs long. The audiobook version of this story was narrated by Alexandre Steele and Tor Thom.  It was released on April 9, 2019, and is 8 hrs and 54 mins long. A copy was provided in exchange for an honest review.

Why I read this book: I wanted to try something new. 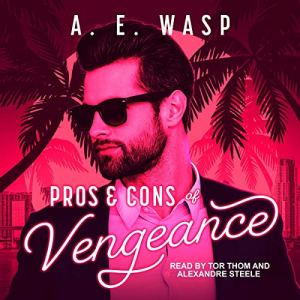 There’s nothing like being blackmailed by a dead man to really bring a group of cons together. And what a group we are: a hacker, a thief, a con artist, a thug, and a Federal agent with an ax to grind.

The deal is simple: We do the jobs, and Charlie’s lawyer wipes the slate clean for each of us, one at a time. Since job number one calls for some muscle, it looks like I’m up first. I’m Steele Alvarez, ex-Special Forces close protection specialist (aka, a bodyguard for some not-so-nice guys).

After learning what the job is – taking down a seemingly untouchable senator with a penchant for beating up young male prostitutes – I’m in. No questions. A bullet ought to do the trick. Then I met Senator Harlan’s latest victim: Breck Pfeiffer, the gorgeous hooker with a heart of gold and the soul of a fighter. One look at him, and I’m gone. That kid laid me out harder than any punch ever did.

I’ll do anything to protect Breck, even kill for him. But Breck doesn’t want the senator dead, he wants vengeance. If we’re going to find a way bring down the slimebag and get the blackest mark on my record erased, I’m going to need all the help I can get.

Charlie was not a nice man.  He was a thief, a liar, and a cheat.  He accumulated wealth through every illegal means possible, then died an early death.  In his will, though, he’s still controlling those around him.  Five men with questionable pasts are gathered to find out what Charlie had in mind when he called on them from the grave.  Each man has committed some act that would surely send him up to prison, and here Charlie is, offering them a chance.  Right five wrongs, and each of the five men will go free.

Now, why Charlie didn’t just grant them freedom is the big question, but I get the feeling Charlie’s up there (or down there) enjoying this game he’s set up.  His lawyer Miranda is leading this band of merry men and she’ll wipe the slates clean – once the jobs are done.

First up?  A senator with a penchant for beating young male prostitutes.  These are barely legal boys who are in need of love and attention, not violence and degradation.  They’ve chosen the life for various reasons, but none signed up for being the victim of one of the most powerful men in Washington.

Steele Alvarez is one of the men Charlie’s recruited.  Once he learns about the senator’s predilections, he’s quite happy to take the man down.  The problem?  Breck.  The young man has been one of the senator’s victims and he’s out for vengeance.  The college student isn’t exactly built for revenge, but he’s built for Steele.

Now, Steele has stuff from his past in the armed services that he’s not proud of.  He did what he had to do in a bad situation, but it was far from legal and still hangs over him.  Breck has recently chosen prostitution.  He had good reasons for needing the money, but it still wasn’t the path he would have selected for himself.  The two men together…they just fit.  Breck can stand on his own, but Steele having his back means something.  Steele can go it alone, but having someone to care about brings meaning to a life that once had none.

This book has plenty of action and intrigue.  I liked the premise and enjoyed the execution.  There are more books in the series and I can’t wait.  As for the narration, I’m not always a fan of dual narration because if the solo narrator is competent, the book usually works.  In this case, I’m good with how things were set up.  Alexandre Steele and Tor Thom are great and they perform well together.  Like I said, I can’t wait for the next book.

A dreamer and an idealist, Amy writes about people finding connection in a world that can seem lonely and magic in a world that can seem all too mundane. She invites readers into her characters’ lives and worlds when they are their most vulnerable, their most human, living with the same hopes and fears we all have. An avid traveler who has lived in big cities and small towns in four different continents, Amy has found that time and distance are no barriers to love. She invites her readers to reach out and share how her characters have touched their lives or how the found families they have gathered around them have shaped their worlds.