Erryn reviews ‘Wild By Nature’ by Lynn Van Dorn. The ebook was published January 15, 2020 and is 138 pages. The audiobook was narrated by Michael Ferraiuolo.  It was released February 25, 2020 and is 3hrs and 48mins. A copy was provided in exchange for an honest review.

Why I read this book: I have loved every Lynn Van Dorn/Michael Ferraiuolo book. 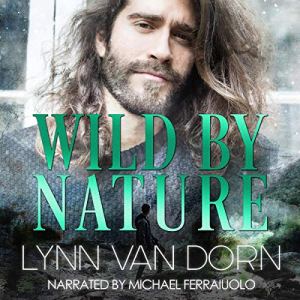 While on vacation, Hayden Blake and his ex-boyfriend get into an ugly argument. Needing some space, Hayden storms out of their rented cabin and gets not only lost it in the dense woods of the Upper Peninsula of Michigan, but injured, as well. Being rescued is a miracle, but being rescued by a man who looks like a Norse god wearing plaid…that’s a dream come true.

All Kurt Jorgenson wants is to go hunting and bag a sizable deer, but instead, he finds Hayden Blake, a city boy lost in Kurt’s forest. He takes Hayden home to care for his injuries, but Kurt finds himself drawn – in ways he hadn’t dreamed existed – to the young man he’s rescued and installed in his spare bedroom.

Kurt yearns to be everything Hayden needs, but he doesn’t know where to start. Hayden desires Kurt and longs for a home, but he’s not sure he has anything worthwhile to offer in return. However, with the help of a nosy librarian, a trip to Walmart, a pig named Wilbur, and cops bribed with cheese, Kurt and Hayden may find their way to a well-deserved happy ending.

Wild by Nature is a romance novella with a displaced twink, a confirmed bachelor, improper library behavior, pasties, shirtless wood chopping, fuzzy cows, and gas station pizza. It contains men falling in love, falling into bed, and just falling. Not necessarily in that order.

Thor and the City Slicker

I adore Lynn Van Dorn, so I was thrilled to see she had a new book coming out.  I saw it wasn’t from the North Shore stories series and was intrigued.  I’m so glad I nabbed this one when I had the chance.  Different, yes, but just as good.

Hayden is just like any other naïve city boy – he heads out without proper gear while in the backwoods of Michigan.  Now, he also left in a snit, so he didn’t think go even grab a good coat, and he also believed he’d be back shortly, so nothing to worry about.  A tumble later with no cell service and he realizes he’s in trouble.  The kind of trouble that could get someone killed.  With a bad ankle and no idea where he is, he hunkers down for the night and hopes he’s not going to die.

Kurt knows these woods.  He’s lived here his whole life, not really seeing the need to live anywhere else.  He’s got his farm and that provides everything he needs.  He hunts to shore up his food stores, but other than that, he’s got a good thing going.  I’m envious of his simple life.  He’s practically off the grid and I wonder what it would be like to not own a computer.  To not be a slave to the internet.

Well, anyway, when he comes up a stranger on a cold morning, he assumes the young man is dead.  When he discovers the city kid isn’t dead, his protective instincts kick in and he takes the young man back to his home, tends to his wounds, and calls a doctor.  Hayden’s got a sprained ankle and since trudging in and out of Kurt’s place is a hassle, it’s decided he’ll stay for a few days until he’s recovered.  His personal situation is also a little dire and he doesn’t necessarily have a home to go back to.  That’s a whole other story.  As he contemplates life at Kurt’s, he ruminates:

No computer, no smartphone, no internet, no decent T.V.  How did the man live?  Hayden wasn’t sure, but it probably involved a lot of chopping wood and went a long way to explaining Kurt’s muscles.  Still Hayden wasn’t sure he could survive in such circumstances.

So how to pass the time?  Well, Hayden has some ideas.  He’s out, proud, and not afraid to go after what he wants.  And he wants Kurt.  Problem?  Well, aside from not even knowing if Kurt’s gay, there are logistical issues such as a sprained ankle.

Kurt, for his part, is confused.  He tried dating women and it didn’t stick.  He just kind of figured he’d be alone for the rest of his life.  Then this young man (and there is a significant age gap) blows into his life and suddenly he’s having carnal thoughts.  He’s curious, so he heads to the library to research – one of the funniest scenes I’ve ever listened to.  I was howling with laughter.  He comes home armed with supplies and determination.  He sees Hayden as his bunny slope.  A nice easy way to work his way up to the black diamond run.

In so many ways this is an opposites attract with a bit of daddy kink thrown in.  Hayden’s ex shows up for added drama, but in the end the men realize sometimes being different can be a good thing.  And loving Wilbur helps.

I really adored this story, and Michael Ferraiuolo’s narration just added to my enjoyment.  This author/narrator collaboration really works, and I hope Ms. Van Dorn brings more of her books to audio.  I know I’ll be the first in line to pick them up.

Lynn Van Dorn was born in Ohio and left it for the wilds of Chicago in her reckless youth.  She wanted to become a fairy princess when she grew up, but since there are few openings for that position, she makes do with being a writer.

In her spare time, she drinks entirely too much tea, snugs her cats, loves her husband and son, reads voraciously, and avoids housework.  She loves to watch anime, travel, knit, bake cookies, and conjure up happy every afters for handsome men who have trouble getting there on their own.