Why I read this book: I am loving this series. 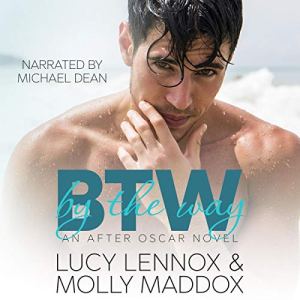 My assignment is simple: Go to the Cape and seal the real estate deal for my most important client. No problem. I’m good at my job, I know how to close a sale, and this time won’t be any different.

Until I meet Sawyer, the sexy young bartender I accidentally kiss in the broom closet. Turns out, he’s one of the owners I’m here to negotiate with.

Okay, so that complicates things. As does the fact that he doesn’t want to sell. Or that we can’t keep our hands off each other despite being on opposite sides. And most of all…that I might be falling for him even though I know better. I’ve made the mistake of falling for a younger man before and I won’t do it again.

For me, family is everything, and nothing represents ours more than the Sea Sprite, the motel that’s been in my family for eighty years. Sure, others (*cough*James*cough*) may describe it as rundown or derelict or in desperate need of a wrecking ball. But I call it our legacy.

I’ve got plans – big plans to renovate the motel back to its vintage glory. The only thing standing in my way is James Allen, the fancy-schmancy lawyer from New York with his adorable smile, jaw-dropping assets, and his client’s millions of dollars.

James seems hellbent on destroying my future. But maybe there’s a way for us to build a new one together…

I’m a huge Lucy Lennox/Molly Maddox fan and when I found out this book was coming to audio, I was ecstatic.  Enemies to Lovers in one of my favorite tropes – when it’s done well.  In this case, it’s done very well.

Sawyer owns a family caravan park by the ocean.  It’s been in his family for eighty years and despite its desperate need for renovation, he’s dedicated to keeping it going.  He lost his parents tragically when he was in high school and has, very recently, lost both grandparents.  He’s a quarter owner of the property with his three uncles and where he sees potential, they see dollar signs.

James is a big shot New York lawyer.  He works for a ruthless man who decides he wants property and will do anything to acquire it.  Often at the point he loses interest – for him it’s all about the chase, the hunt.  James lives on adrenaline, and securing the property in this little itty bitty town on Cape Cod is a no-brainer.  He just has to see how little he can pay for the valuable property.

So there’s the conflict – James wants to buy and Sawyer doesn’t want to sell.  And it’s all about the arguments and debates and, eventually, the reality.  That each finds the other sexy.  That there’s good within each of them.  That they might even fall in love.  With a conflict so strong and defined, and with no way out, I did wonder how I was going to get my happy ending – one would have to yield, right?  Give up everything he’s wanted?

Ah, but I wasn’t creative enough – which is why I’m the reader and Maddox/Lennox are the authors.  I got my happy ending with all the wonderful feels without feeling cheated.  Man, Sawyer and James had to work hard for their happily ever after, but I think that made it all the more special.

Okay, time to mention Michael Dean.  I’ve said so many good things about him, but it bears repeating that he’s talented and did a great job with this audio.  There are two more books in the series and I can’t wait.

Lucy Lennox is finally putting good use to that English Lit degree earned way back in the 1900s.

She enjoys naps, pizza, and procrastinating. She has some snarky kids and is married to someone who is better at math than romance but who makes her laugh every single day and is the best dancer in the history of ever.

She stays up way too late each night reading M/M romance because that stuff is hot.

Molly Maddox is the pen name for a New York Times bestselling author who started writing at an early age because her older sister, Lucy Lennox, was a writer and Molly wanted to be like Lucy in all ways (she still does). When she’s not writing, Molly likes to cook, read, take pictures of her dog and cat cuddling, and finds an odd satisfaction in folding sheets so that the top sheet is indistinguishable from the bottom sheet.She loves all things romance and is grateful every day she gets to write for a living.