Why I read this book: I enjoyed book 1 so was willing to take another ride. 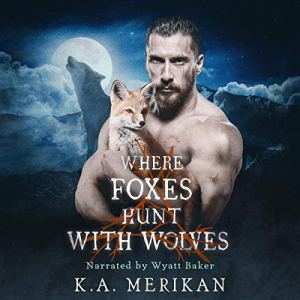 “You are responsible for what you tame.”

Banished from his pack for being gay, Yev has one last chance to redeem himself in the eyes of his family. He needs to stick to the rules for a year and bury his sexuality forever. Shouldn’t be so hard, since he can’t have a relationship with a human without revealing his werewolf nature.

That is, until one night, a drunk ginger brat points a rifle in his face.

Radek finished university months ago but thinking about the future is not on his agenda. Life would be great if he could just avoid any and all responsibilities.

His world turns upside down when he’s arrested by an infuriatingly attractive forest ranger. If that wasn’t bad enough, he’s now hunted by werewolves for discovering their drug-smuggling operation, and…he turned into a fox?

Helpless and wounded, he seeks sanctuary with the very man who got him into this mess, but what’s a fox to do? If there’s someone who can help him understand his changeling origin, it’s Yev. A werewolf.

Well, K.A. Merikan has done it again.  I enjoyed the first Folklore book, and so decided to dive in and try this one.  Not at all what I was expecting.  But that is typical for this writing duo.

I don’t read many shifter books, but after this one, I might just do more.

Radek is a brat.  An entitled brat who has an education but has done nothing with it. He’s coasting on family money, never questioning where it comes from or on whose back it is being earned.  He meets Yev, a forest ranger, who arrests his bratty butt.  Nothing comes of it, of course, and the two men go their separate ways.  Radek isn’t satisfied, though, and he tries to take revenge.  That also fails, but Yev challenges him to go to the family fox farm.

Now, here’s where the warnings come in.  There is animal cruelty in this book and I found it difficult to cope with.  I’m never sure with a Merikan book if I’m going to get a true happy ending, so I was on edge with regard to the abuse.  The warnings also mention violence, bodily harm, and offensive language – all things that were present.  Interestingly, I didn’t find the morally ambiguous characters as ambiguous as some of their others.  Maybe I’m becoming inured to questionable behavior.

Radek is a changeling and his transformation is remarkable.  I wanted an Ember of my own, if I’m being honest.  And Yev being a werewolf made him empathetic to Radek.  I liked how the two men grew to care about each other.  I have to note that I didn’t realize foxes were canines.  Given my affinity to dogs, I’m not surprised foxes have always held my attention.

This story is violent.  And cute.  And thought-provoking.  And gut-churning.  I had to work for it and I like those kinds of books.  The book made me uncomfortable at times and I think that’s the sign of a really good read.

I’ll mention Wyatt Baker.  He does a great job with K.A. Merikan books and I was glad to see he was helming this one.  Overall, I’m glad I enjoyed the plunge.  Can’t wait to see if there is a third book coming.

K. A. Merikan is the pen name for Kat and Agnes Merikan, a team of writers, who are taken for sisters with surprising regularity.

They love the weird and wonderful, stepping out of the box, and bending stereotypes both in life and books. When you pick up a Merikan book, there’s one thing you can be sure of – it will be full of surprises.

To keep up to date with their new releases (and get a free book in the process!) sign up to their newsletter: http://kamerikan.com/newsletter

FUN FACTS:
– We are Polish,
– We’re neither sisters nor a couple,
– Kat’s an artist, and Agnes is a psychologist but neither works in her field,
– Kat’s fingers are two times longer than Agnes’s.