Erryn reviews ‘Lace (Material World Book 1)’ by K.C. Wells. This book was released by the author on May 17, 2017, and is 90 pgs long. The audiobook version of this story was narrated by Seb Yarrick.  It was released on December 14, 2020, and is 3 hrs and 3 mins long. A copy was provided in exchange for an honest review.

Why I read this book: I adore K.C. Wells. 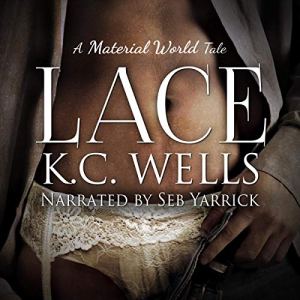 When Shawn’s best mate, Dave, breaks up with his girlfriend, Shawn tries not to get his hopes up. After all, Dave’s still straight, right? Wrong. Dave reveals he’s bisexual, and that pounding you hear is Shawn’s heart. He’s loved Dave for so long, but he’s not about to jeopardize their friendship by telling Dave how he really feels.

But when Dave discovers Shawn’s little kink, it opens up a whole new chapter for the two friends. Except Shawn can’t help but worry – if there was no kink, would Dave be there? And is Shawn brave enough to find out?

A stand-alone short story of lust, lace – and love….

There are times when I’m looking for low-angst and somewhat simple romances. Something sweet while being sexy at the same time.  Often, I can turn to K.C. Wells to provide that book.  In this case, she delivered.

What happens when a man has been in love with his best friend forever?  Watched from the sidelines as said friend has other relationships – girlfriends in particular?  Well, it can hurt, to be sure, but is it worth it to say something when you’re risking the friendship?  Shawn doesn’t feel that way.  He loves Dave but would never risk what they have.

Until the day Dave reveals he’s broken up with a woman he’d been seeing because she’d caught him flirting with a man.

He barely has time to recover from that shock when Dave accidentally discovers Shawn loves to wear women’s undergarments.  Okay, so now Dave is seeing Shawn in a whole new light.  He also wonders if risking their friendship is worth it.  But man, he wants to see Shawn in panties.

Like I said, this is a fun romance.  Slightly kinky, to be sure, but with plenty of good feels.  I always enjoy K.C. Wells books and this one was no exception.  There are more books in the Material World series and I hope they will make their way to audio shortly.

Seb Yarrick is now narrating many of Ms. Wells’ British books and I’m pleased.  He is great to listen to and his performances always hit all the right notes.  So, a great and fun book about friends to lovers.

K.C. Wells started writing in 2012, although the idea of writing a novel had been in her head since she was a child. But after reading that first gay romance in 2009, she was hooked.
She now writes full time, and the line of men in her head, clamouring to tell their story, is getting longer and longer. If the frequent visits by plot bunnies are anything to go by, that’s not about to change anytime soon.