Erryn reviews ‘Soul to Keep (Rented Hearts Book 2)’ by Garrett Leigh. The ebook was published April 2 2018 and is 238 pages. The audiobook was narrated by Dan Calley.  It was released June 15, 2020 and is 6 hrs and 2 mins long. A copy was provided in exchange for an honest review.

Why I read this book: I loved Rented Hearts. 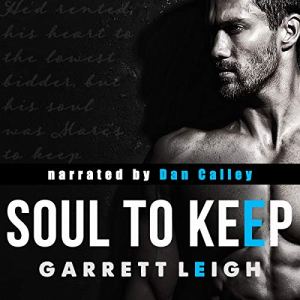 Recovering addict Jamie Yorke has returned to England from California. With no home or family to speak of, he sticks a pin in a map and finds a small town in the Derbyshire Peak District. Matlock Bath is a quiet place – he just needs to get there, keep his head down, and stay clean. Simple, right? Until a chance meeting on the flight home alters the course of his so-called life forever.

Ex-Army medic Marc Ramsey is recovering from life-changing combat injuries while pulling nights as a trauma specialist at the local hospital. Keeping busy is a habit he can’t quit, but when Jamie – so wild and beautiful – bursts into his life, working himself into the ground isn’t as compelling as it used to be.

Marc falls hard, but chaos lurks behind Jamie’s fragile facade. He’s winning his battle against addiction, but another old foe is slowly consuming him. Both men have weathered many storms, but the path to the peace they deserve might prove the roughest ride yet.

Audible | Amazon | Add it to GoodReads

This is the second book in the Rented Heart series, and I think I loved it even more than the first.  Jamie was in the first book, and I’d seen he was a good soul, even if he was an addict.  When the time came, he did the right thing.  And doing the right thing led him into the life of someone who could help him.  Someone who bundled him off to California where he could start a new life.

But he also missed home.  Although not ready to see his friends, he is ready to start again, this time with the comforts of England.  His friends set him up with a flat, and he has some savings, but it won’t last long.  He needs a job.

Marc was a medic in the army.  Battle-weary, he’s in the States to receive specialized medical treatment.  During a turbulent flight, he comforts the man next to him.  He never expects to see the exceptional young man again, but is shocked to find they are in the same small town.  Marc is drawn to Jamie who doesn’t care about the prosthesis.  He sees the real Marc.  Wanting to help, Marc offers Jamie a job.  Jamie is leery, of course.  He’s a former rent boy and drug addict, so why would someone trust him enough to offer him a job?  But Marc’s offer is too temping, and Jamie wants to spend time with the gruff older man.

Now, Ms. Leigh’s books always interconnect, even if they are from different series.  Marc has appeared before, and several of his friends whose stories have already been told appear in this book.  I like those little gems.  And Marc treats a young man named Ludo.  I’m like…yeah, I remember Ludo.  His book gutted me but was freaking brilliant.  Again, small but potent connections.

I really enjoyed this book.  It moved me.  It made me think.  It made me cheer.  It left me planning to seek out more of Ms. Leigh’s books.  Finally, I’ll mention Dan Calley.  I think he did a great job with this book and I hope the duo keep working together.

Garrett’s debut novel, Slide, won Best Bisexual Debut at the 2014 Rainbow Book Awards, and her polyamorous novel, Misfits was a finalist in the 2016 LAMBDA awards.

Garrett is also an award winning cover artist, taking the silver medal at the Benjamin Franklin Book Awards in 2016. She designs for various publishing houses and independent authors at blackjazzdesign.com, and co-owns the specialist stock site moonstockphotography.com with renowned LGBTQA+ photographer Dan Burgess.