Erryn reviews ‘Unbreak Me‘ by Maria Vickers. The ebook was released on March 21, 2019 and is 217 pgs long. The audiobook version of this story was narrated by Andrew Joseph Perez, released on March 10, 2021 and is 6 hrs and 14 mins long.  A copy was provided in exchange for honest reviews.

Why I read this book: I’s always willing to try a new author.

They were supposed to be together forever. That was the plan, but through a cruel twist of fate the night before their three-year anniversary, Tex Davis lost the one man he would ever love, Memphis King. A year has passed, and he still hasn’t been able to move on. Everyone tells him it’s time, but what do they know? Memphis was his partner in love and life. Losing him broke Tex.

Tex has been given an opportunity to move from New York to Seattle. His friends and family are encouraging him to take it, but he has already decided to decline the offer because that would mean leaving Memphis behind.

Whether it be fate or something else, Memphis came back to him. Tex’s first love is supposed to help him move on, but not even Memphis can bring himself to force Tex to let him go.

Is it so wrong to want to spend forever with the person you loved most? Both hearts are begging to be unbroken.

This book starts out with a fight that culminates in an accident and one of the main characters dying.  Most of the rest of the book is the surviving main character working through his grief at the one-year mark of that death.  This, I could relate to.  Losing a loved one is painful at the best of times.  But to feel guilt over that death is overwhelming and debilitating.  Tex’s pain was real to me.

Suddenly Memphis is back.  Clearly he’s a ghost, but he’s real enough to Tex.  So Tex immerses himself in the memories and obsesses with living every moment with Memphis, often to the detriment of his life in the real world.  But when Memphis encourages Tex to move forward, Tex is resistant.  He has Memphis back, so what else could he possibly need?

To this point, I’m like, uh, okay, this is a paranormal romance.  And I couldn’t see how a happy ending between Memphis and Tex was possible, given one of them was, uh, dead.

Then the author pivoted, changed things up and…I felt cheated.  Like what I’d just endured wasn’t real.  Have to say, that didn’t sit well with me.  But hey, it looked like I was going to get my happy ending after all.  So, cheated or not, I was placated.

Now, I have to discuss the head hopping in this book.  Some authors do this amazingly well, but most don’t.  Unfortunately it wasn’t done well in this book.  I often struggled to know whose head I was in.  This was especially frustrating in the opening scene when I had no grasp of the characters.  To jump back and forth so frequently meant I never immersed myself in the story.  I never felt grounded.  I’ve read thousands of romances and this is not a favorite method of story telling for me.

What did I like?  The emotion.  The depth of feeling.  The tangibility of Tex’s grief.  I also liked the narrator, Andrew Joseph Perez.  He did a good job, although it would have been helpful to have a bit more differentiation between Tex and Memphis – might have helped with the head hopping.

I wanted to like this book, and there were certainly parts I did.  I think each reader needs to make their own judgement and if you’re game, there’s lot of good stuff in this – the emotional arcs were strong and the narration was good. 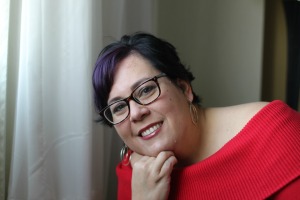 Maria Vickers is a bestselling and award-winning author who currently resides in St. Louis, MO with her pug, Spencer Tracy. She has always had a passion for writing and after she became disabled in 2010, she decided to use writing as her escape. Life is about what you make of it, you have to live it to the fullest no matter the circumstances.

From a young age, she has always loved books and even dreamed of being an author when she was younger. Growing up in the Navy, she used to weave tales for her siblings and her friends about anything and everything. And when she wasn’t creating her own stories, she had a book in her hand. They transported her to another world. She hopes that her readers will have the same experience when reading her stories, and that, in some way, they can relate to her characters.

Getting sick changed her life forever, but it also opened doors for her that she thought would always be out of reach.