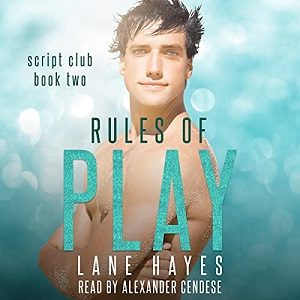 The genius, the mechanic, and a new playbook…

My brother’s friend is hot. If you’re into flannel-wearing lumbersexual former jocks who eat donuts for dinner and still scribble to-do lists on their palms. I’m not. I’m a serious scientist in my final of grad school. Okay, I admit I have few quirks of my own. I also have a broken truck and a boss who thinks I can help him find love. I’m in over my head. Help!

A few quirks? Really? George the weirdest dude I know. He wears capes in public, brings a book everywhere he goes, and loves all thing spooky. He’s also the smartest person on the planet—who somehow thinks I can help him write a How-To-Get-A-Date playbook for his boss. Yeah, that sounds suspicious. I know baseball; I don’t know anything about love. But I can’t say no. I’ve always had a soft spot for George. I just didn’t count on falling for my best friend’s nerdy brother. This is against the rules, isn’t it?

Rules of Play is an MM bisexual awakening story where opposites attract and shenanigans ensue!

“You really are a little weirdo, aren’t you?”

The twinkle in Aiden’s eyes and his affectionate tone paired with an unlikely term of endearment were exactly what I needed to pull me from my infatuation-induced awkwardness.

I smacked his biceps playfully, then leaned against his side, staring up at the crescent moon in the twilight sky. “I am weird and I am proud.”

Aiden chuckled. “I like that about you. I like your idea too. It’s a good one. I should get in on that and collect a few new experiences before I quit the garage and move on to my next venture.”

“I don’t know. Maybe something will come to me.” He set the half-eaten container of meatballs down and reached for his beer. “As for your boss…he needs a rule book.”

I shifted to face him. “What kind of rule book?”

“A dating rule book. It would be the equivalent of a sports playbook…a list of strategies and a backup plan if things go awry.”

“Okay, that makes sense. Step one, ask for a date.”

Aiden shook his head. “No. Don’t go in hot. Gotta practice a little finesse. It’s better to get to know someone—ask about their interests, share yours, and see if there’s anything there. Theoretically, that’s how I think it should work.”

“You’re right. They have to build a rapport.” I squinted. “He’s going to need an icebreaker.”

“Yeah, that makes sense. Hit me with your best shot.”

“Uh…what do you mean?” I stammered.

“Pretend you’re into me and you want to get to know me.” Aiden quirked a brow and wiggled his fingers. “Ask me something.”

“What are your interests?”

He made an obnoxious buzzer noise and rolled his eyes. “Wrong. That’s a date question. A lame one, too. Would you really walk up to someone and ask them what they’re into?”

“Redo. You’re trying to get to know me, but you can’t be too forward, and you can’t make assumptions. Got it?” He waited for my nod of agreement and continued. “Pretend we’re standing at the coffee machine at work on a Monday morning. And…action.”

“O-kay…what did you do last weekend?”

Aiden smiled. “Good one. And my answer…not much. I went to that college ball game I told you about last week, watched a lot of basketball, made arrangements to schlep your Bronco here, and played pool with Kenny and a couple of high school buddies. You?”

“I studied and hung out with my friends.”

He stared at me long enough for me to wonder if I had meatball between my teeth.

“If that’s all you have to say, you just killed this conversation,” he deadpanned.

I chuckled. “I did not. It was your turn to ask me something. That’s how it works in real life. I’m not that big of a dork!”

“But what about your boss?”

“Right, so this is where rules come into play. You have to pay attention and take hints and clues to heart. Almost everything I mentioned about my weekend had a theme…sports. I told you what I’m interested in without announcing, ‘I like sports.’ If you really wanted to get in my pants, you’d ask me a sports-related question.”

I shot to my feet, whirling my cape like a true badass. “Who said anything about getting in your pants?”

Yes, I was entirely in favor of the idea, but I was pretty sure I hadn’t said it aloud.

“Isn’t that the end game?” Aiden flashed a devilish grin my way.

“Then what’s the point?”

“I don’t know,” I sighed in defeat, reclaiming my spot on the stoop next to him. “That’s why this is complicated.”

I enjoy Lane Hayes books.  Her Starting From series was good, so I leapt on The Script Club series.  The premise is cute – a geek and a jock.  I really enjoyed the first one, but this one wasn’t just as much fun.  I’m trying to put a finger on it because the book was decent.  The brother’s best friend trope is a good one.  I liked George – lives life on his terms, cape and all.  He gets stuck in a tough situation at work and could use a hand from someone with…more experience.  Aiden is trying to get out from under his homophobic uncle and the way to do that is through education.  But he needs someone to check his numbers – so why not a future NASA scientist?

So you’ve got a decent premise.  I guess I just didn’t connect with the characters as I have in the past.  Now, other listeners have enjoyed the story, so look beyond just my review and if you’re a Lane Hayes fan or enjoy geek/jock books then you’ll probably enjoy this one.  I’ll definitely pick up the next one in the series as I’m thinking this was a one-off that I didn’t connect with.

Alexander Cendese is a good narrator and he did a decent job with this story.  Overall it was decent, just not my fave.

I picked up this audio because I really enjoyed the first one. Alexander Cendese is a narrator who I have enjoyed listening to many times, this will definitely not be the last audiobook I pick up that he narrates. I am also a fan of Lane Hayes, who never fails to create a sweet love story.

In book two, the romance is between a different couple than the first, but since it is the best friend(s) and brother of the first two characters, the previous couple appears frequently. It seems the series will have a nerd and jock fall in love theme, since The Script Club that the series is named after is a group of smart and somewhat nerdy college students and roommates who discuss starting a business to earn them money while they further their studies. The “club” hasn’t really done anything as a group yet, but I am curious if they will actually work together on a project in the next books. Still the group will be evolving as each member pairs off and perhaps moves out.

In this book, we meet Aiden, the close friend of George’s brother, Simon. Aiden is a former jock turned mechanic. At least until he can finish classes that will help him become a sports analyst. Though he was close to George’s family, things between him and George have been sort of strange, like when Aiden tried to steal a girl who George was kind of dating. George has always found Aiden attractive but as far as he knows Aiden is as straight as they come. When the two agree to help each other with their school and car problems, of course they learn that all was not as they thought.

I really came to like George and his contradictions. Out of all the Script Club members, he seems to be the “coolest.” His vampire capes create an air of confidence even as he uses them as a sort of protection. Aiden is a good guy and likable, too. I rolled my eyes at them worrying over what George’s brother would think about him dating his best friend even though Simon had done the same thing in the first book. The two are solid characters with set goals and life plans, though, and they made for a very sweet pairing. I felt the book missed a little bit of the heat and intensity of the first book, but I enjoyed this listen and would definitely recommend checking out the book and the series.

Did you miss book 1 in the series? Get Following the Rules at Amazon

The geek, the jock, and a new set of rules…