Erryn reviews ‘Brother-in-Law Material’ by Crystal Lacy. The ebook was published May 29, 2021 and was 232 pages. The audiobook version of this story was narrated by Michael Ferraiuolo, released September 23, 2021 and is 9 hrs and 13 mins long.

Why I read this book:  I adore Michael Ferraiuolo. 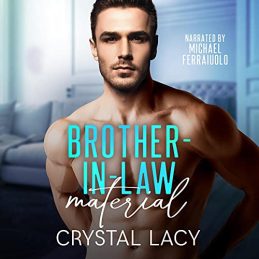 Can his sister’s fake boyfriend become his real one?

When Kendall O’Hara catches his boyfriend cheating, he runs to his sister – the only person he can rely on in the city. But she’s on a business trip, so Kendall finds himself temporary roomies with her super hot and equally kind live-in boyfriend.

Luke Hale’s family has made him so jaded regarding relationships, that he’s had no problem pretending to be his best friend’s boyfriend. It’s never been a problem, until her sweet, adorable brother arrives. Kendall’s passion for his food channel is contagious and his openness and vulnerability are intoxicating.

They both know the other should be off-limits, but spending time together – cooking, talking, laughing – is so easy and wonderful. Their attraction is undeniable and once Kendall learns that Luke is actually available, all bets are off. Sizzling chemistry quickly gives way to real feelings. But Kendall’s stay is temporary. Can their friends with benefits arrangement blossom into a forever love or will they both wind up alone again?

I’m a huge Michael Ferraiuolo fan, so when he saw his new audio, I was happy to snap it up.  Ms. Lacy is a new-to-me author and I’m always up for an adventure.  In this case, the decision was the right one.  I really enjoyed this audio.

I empathized with Kendall – finding his boyfriend in bed with another man.  Ouch.  I understood his desire to run to where he felt safest – his sister’s home.  Unfortunately she’s out of town, but her roommate his home.  Kendall’s had a crush on the man for years, but he can shove those feelings aside if it means he has a roof over his head while he finds somewhere to live.

I was curious why Luke was living platonically with Kendall’s sister.  Both of them make enough money to live alone.  I guess maybe they shared the space when they were starting out professionally?  Yes, they’re pretending to be a couple and why didn’t Kendall wonder why the two didn’t share a bedroom?  All little questions that didn’t detract from the enjoyment of the audio but did leave me with questions.

Anyway, Kendall finds himself dealing with an ex who won’t take a hint, and Luke is happy to step up to be the fake boyfriend.  And if they are attracted to each other, they can manage that.  Right?  Well, since this is a romance, that question answers itself.

I enjoyed the story, especially Michael’s narration of it.  He just adds an extra special something to the story and although the book is a stand-alone, I really hope Luke’s cousin gets a book of his own.  I adored him!

Crystal Lacy lives with her loving family in Hawaii, where it is always either drizzling or sunny and never snows—which is a shame, because she prefers being cold to being damp and hot unless it’s for Very Good Reasons. She writes queer romance, mainly M/M, but also some F/F. She has aspirations to one day write a YA novel about cats.

Crystal is a long-time fangirl and writes slash fanfiction for the Untamed/CQL and NBC Hannibal fandoms under the name crystalusagi. She has a deep love for fandom culture, and can be frequently spotted on Twitter and Tumblr reblogging pretty fan art.