Erryn reviews Omega from the Ocean (Heron Manor Book 1)’ by Amy Bellows. The ebook is 312 pages and was published July 4, 2019. The audiobook was released on July 27, 2021 is 8hrs and 48 mins and narrated by Lance West. A copy was provided in exchange for an honest review.

Why I read this book: I enjoyed Expensive and was willing to try another Amy Bellows book. 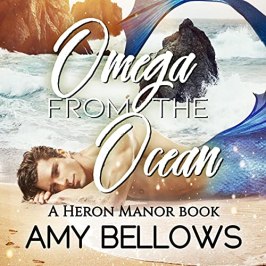 An MM Retelling of The Little Mermaid. With dragons.

Merman Jack is a terrible virgin sacrifice. Mostly because he isn’t virginal. At all.

For Jack, the human world has too many wonderful temptations, and too many alphas to resist. He only has two months left before he has to give himself to the Sea King, and he doesn’t want to spend them in the cold, dark catacombs where the Mermen of Rixton live. It may be forbidden for Jack to go to shore, but when did that ever stop him?

Peter is a terrible dragon shifter. He can’t figure out what he’s supposed to collect for his hoard. Without his hoard, he can’t do any of the important dragon-shifter things, like take his dragon form or find his fated mate. After years of losing his lovers to their fated mates, Peter’s feeling his age, and he’s tired of being alone.

When Peter sees a beautiful merman on the beach, he thinks he’s finally found his fated mate. Jack falls hard for Peter too, but he knows they can’t be together forever. If Jack doesn’t show up on the day of his sacrifice, the Sea King will kill his father and take his brother instead.

Will the love between a terrible virgin sacrifice and a terrible dragon shifter be enough to change their fate?

Okay, on to the story itself.  I liked the idea of a retelling of The Little Mermaid.  And I’ve read some amazing dragon shifter books recently, so I honestly thought I would love this book.  I did enjoy it, although it dragged a bit in places.  There were also so many rules for the mermen that it became a challenge to keep everything straight.  But I blame myself for that.

I liked Jack.  Free spirit, wanting to sow his wild oats before he’s forced to turn himself over to The Sea King.  He’s willing to make the sacrifice to save his father and brother.  I should also say there was plenty of disturbing violence in this book.  I could understand the epic battle scenes, but there were quiet acts which disturbed me even more.  As intended, I really hated The Sea King.

I think I related more to Peter.  Getting on in life without true purpose.  Having everyone leave him when they found their true fated mates.  He wants to become his full potential of reaching dragon form, but he can’t because he doesn’t have a hoard (okay, maybe I didn’t relate to that part quite as much…but I understand loneliness and not feeling like you’re living up to your full potential).  He has two loving mothers, but something’s missing.

That loneliness changes when he meets Jack.  And everything looks promising until Jack tells him they can only have a couple of months together.  Peter is ready to fight The Sea King, but he can’t do it alone.  Hence the great conflict in the book.

I feel like my review struggles to capture the essence of the book.  Love is at the heart.  So if you’re up for a good merman or dragon shifter book, you certainly can give this one a go.

Lance West narrated the book and I enjoyed his performance.  I’d be willing to listen to another book he narrates.

Amy is a librarian and an author of MPreg romance. When she isn’t writing or librarianing, she’s chasing her daughter around the house or cuddling with her wife. You can hang out with her on Facebook or check out her website.