To read the duo review of Following the Rules (The Script Club Book One) click here.

To read the duo review of Rules of Play (The Script Club Book Two) click here.

To read the duo review of The Jock Script (The Script Club Book Three) click here. 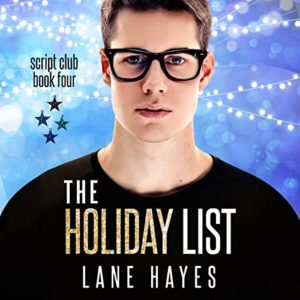 The Mars maestro, the single dad, and a wish list…

Boy, am I lucky! Finding a living situation with a houseful of passionate scientists just before the holidays is ideal in every possible way. As the newest member of the Script Club, I feel it’s important to step up and tackle the to-do list my friends would prefer to avoid. Item one, address the tutoring request from the neighborhood-hottie-slash-single-dad on the next block. I’ve got this!

Handsome, older, sporty gentlemen intimidate me. And Mr. McSwoony doesn’t like the holidays. This may be a daunting task.

What do you do when a new neighbor shows up on your doorstep with cookies and a wacky plan to spread holiday cheer? I don’t need cheer, but I could use help with some of the experiments my son wants to try. I know football, not science. Hopefully, I can talk Chet into a mutually beneficial trade. The only snag is that I’m seriously attracted to my local Mars expert. He’s unintentionally charming…in the very best way.

Don’t quote me, but this holiday elf with thick glasses and a mile-long list might be exactly what I need.

The Holiday List is an MM bisexual, geek/jock romance with a holiday twist featuring a lovable scientist and a single dad who’s probably on the naughty list! 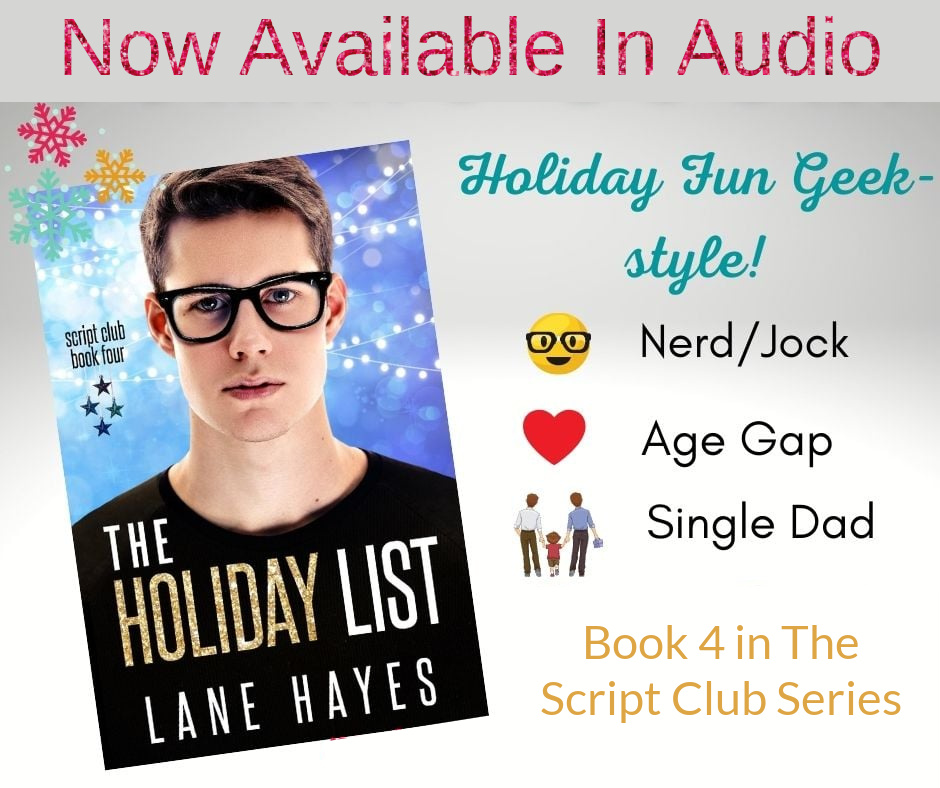 “Who said I was lonely? I’m not lonely. I’m just tired of being with myself. That’s not the same thing,” I argued.

“Close enough. One thing that helps me fight the blues is an immediate change of scenery,” Chet pronounced with a wide grin.

“Thanks, Doc, but Linc is coming home this week. I’m not going anywhere.”

“You don’t have to physically go anywhere. You can just switch up your routine and add—”

I had to give the guy credit…he was tenacious.

I couldn’t let him think he’d won too easily, though. I furrowed my brow, giving him my best cranky scowl, and huffed. “You really want to decorate my house?”

He frowned. “No. I want to reset your karma. And mine. You’ve done a good deed here tonight, and I owe you one in turn. I also owe my roommates for their kindness.”

“Putting up a tree is going to help your karma?” I snorted.

Somehow, I doubted that, but I liked the idea of having an excuse to see him again. “Fine. You can decorate my house.”

Chet whooped as he jumped to his feet. “A nice noble fir would look perfect in that corner of your great room near the fireplace. But of course, closer to the window. We don’t want to worry about fire hazards. What’s your ornament situation? I’m happy to purchase some if needed. Simple red and silver balls are always nice and—”

“I’ve got plenty of balls.” I stood, testing my shoulder to be sure I didn’t do any real damage, as I met him at the door. “It’s getting late. We can talk about this later. You seem like the kind of Christmas elf who needs parameters.”

He snickered, pushing his glasses to the bridge of his nose. “There might be some truth to that statement.”

“Just so we’re clear, I’m not gonna want to wake up in a winter fuckin’ wonderland.”

I braced my hand on the doorknob, scanning the dimly lit foyer briefly. “Come over Saturday. We can talk about it then. And…you can meet Linc.”

Chet narrowed his eyes. Not gonna lie, his immediate transformation from skinny geek to bad-ass science guy was kinda hot.

“No, but it might be a good trade. We’ll see.” I shot a lopsided grin his way as I opened the door, pointing at the chair that knocked me on my ass. “This is not an adequate security system. I’ll give you my number. If anything seems suspicious or if you need anything, call me.”

Chet typed my contact info into his cell obediently, then pressed Call so I had his number too. Courtesy complete, he fixed me with a no-nonsense look. “Thank you. For the record, while I appreciate your help tonight, I didn’t agree to—”

This had to be one of the oddest yet most interesting nights I’d had in a while. This was probably a good time to remind myself that Chet was my neighbor. My much younger neighbor.

But damn it, he was tempting.

I leaned in and pressed my lips to his. It was featherlight touch, hardly a real kiss at all. It was just enough to make him blush. Chet’s cheeks pinkened, and a flush rose low on his neck.

Don’t ask me how I did it, but I somehow managed not to turn around as I headed down the pathway and up the street to my house. My lips twitched in amusement, giving way to a smile that grew with every step. When I finally got home, I let it fly, grinning like a madman as I chomped on a rosemary shortbread cookie made by my own personal elf.

Was I vaguely alarmed at the concept of letting him put a bunch of holiday crap up in my house? Fuck, yes, I was. Hot kiss or not, nothing was going to happen between us. And I was okay with that. Mostly.

Maybe he was just the diversion I’d needed, ’cause hanging out at home for the next couple of weeks suddenly didn’t seem so bad. 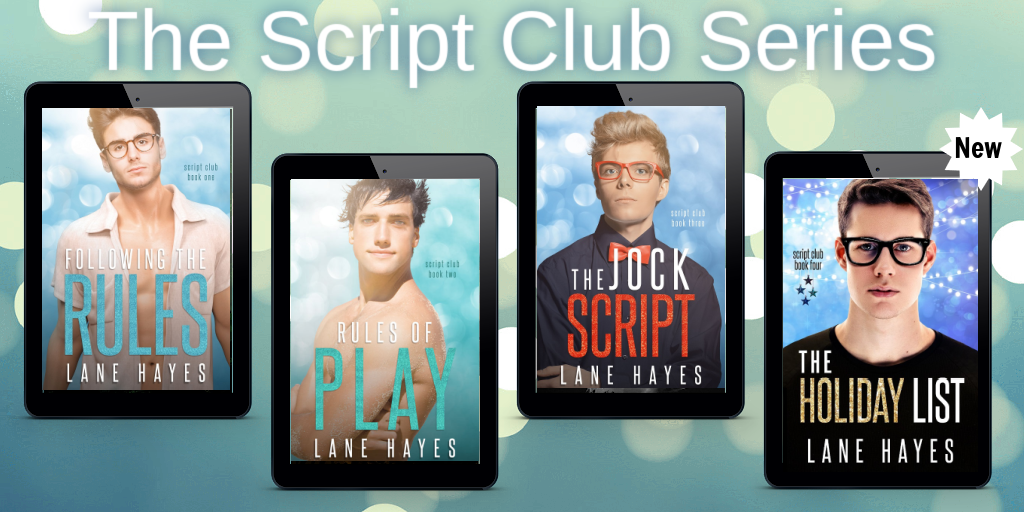 I am a fan of this author and The Script Club series. So far each of the couples have had a connection as friends, siblings, or roommates. While it is true that Chet has moved into the house with the previous geeks in the series, he is really new and we haven’t learned about him at all. Between the length of the book and the unfamiliarity with the mc’s it makes this seem like a bonus holiday story. Though we do get to see some of the other guys briefly.

Well, I know I am a sucker for holiday stories, and this one really melted my heart. Chet is awkward, most of the geeks in this series are. He has followed his family tree into science and is working on a Mars project. We learn that his family wasn’t super close and he was home-schooled. There wasn’t a lot of interaction especially with kids, so though he wants to help his neighbor with his son, he doesn’t really want to be hands on. Unless it means being handsy with Sam, the neighbor himself.

Sam is a referee who part-time parents with his ex. The script club guys believe him to be the stereotypical straight guy, but that ex refers to ex-husband. Sam has been out as bi for a long time and he is really drawn to the bumbling and helpful Chet. They are total opposites in terms of confidence, and in holiday spirit. Chet wants to spruce up Sam’s house, since Sam is kind of a grinch in those regards. While there Chet meets Sam’s son and while he is not a kid person, he is a science person and they connect pretty quickly.

Things quickly turn homey for the the two and Linc, Sam’s son. Chet spends so much time with Sam that it’s one of the reason’s we rarely see the rest of the club. Through Thanksgiving they are in constant company, but when Christmas time arrives and Sam isn’t off work due to his sprained arm, Chet wonders how they can keep going.

Chet’s insecurity and Sam’s realization that he wants more than just his career and time with his son were heartbreaking and so sweet, respectively. They kind of melted my heart in a short amount of time. Alexander Cendese does a good job narrating though his geeks are all starting to sound the same. Overall, I really enjoyed this listen and recommend the book and the whole series.

I’m enjoying The Script Club books.  I might not be a NASA geek, but I can relate to guys who are on the nerdier side of things.  I certainly can’t relate to the jocks in these stories.  They’re all great guys, but so out of my league. That being said, I related to Sam.  Not thrilled of Christmas, and a little lost amidst all the holiday cheer.  Throw in that he’s a single dad who wants what’s best for his brilliant young son, Linc, and you’ve got the making of a great story.  Especially since Sam believes his ex is the better parent.  But he’s willing to step up and if that means asking the geeks down the street for help with his son, he’ll do it.

Chet isn’t thrilled about offering to help tutor a kid, but one look at Sam and he can’t refuse.  He wants to bring Christmas joy to the household and tutor the kid.  Science is so much fun for Chet that he’s happy to share that love.  And if it means more time helping out Mr. McSwoony, well that’s okay too.  Soon they stop fighting the attraction and give in.

But they don’t have much in common, and Sam’s made it clear this is just for the holidays.  So, to protect his heart, Chet pulls back.  I’m glad they both figured out what they really wanted in time for a happy ending and the epilogue was adorable.  Alexander Cendese did a great job narrating this series and he definitely added to the warm feels from the book.