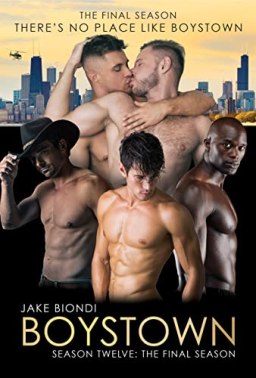 The aftermath of the helicopter attack on the Ciancio Spire sets up the epic finale of the entire BOYSTOWN series. As family members come together to mourn the deaths of loved ones and reminisce about the past, the mastermind behind the attack plans to put an end to the Ciancio and Mancini families once and for all.

In the meantime, Theo Baxter, obsessed with Joseph Mancini and his deceased father Cole O’Brien, seeks to realize his dream of a relationship. However, the arrival of Theo’s mother Reverie Manning to Chicago brings about a shocking murder.

While Hope Ciancio struggles to keep her father’s family secret hidden, Neil Ciancio and Cody Mancini work to uncover it. When the truth is finally revealed, multiple lives are impacted, setting in motion yet another scheme that puts lives at risk.

As Valentine’s Day approaches, four loving couples prepare for their joint wedding day; however, the presence of a shadowy figure threatens to turn a day of celebration into one of tragedy. After twelve seasons, the saga of the Ciancio and Mancini families reaches its unforgettable conclusion.

At the end of every BOYSTOWN book, there is always a big cliffhanger that needs to be resolved in the next book. At the end of the the last book, Season 11, there were a lot of lives in peril. Knowing this was the series finale, I couldn’t wait to find out who would make it through the beginning of the book to survive the end.

There are always several deaths in the books; several of those a result of murder. For the most part in this book the characters who died weren’t that near and dear to my heart. Except two of the men, that is. It felt very sad to me that these two men, an established couple, died. Only, they were in each others arms and somehow, knowing they wouldn’t have to be apart was a small comfort. I know I am being a bit vague, but it is so hard to review this series without spoiling too much of what is happening.

So after the wreckage is cleared and bodies are brought to the hospital or morgue, there are still a handful of characters from the original series and the younger generation has made it through unscathed. It is time for them to pick up the pieces and move forward. For some of these people, it involves new love interests. And there are a lot of those. Sometimes it feels like they moved too quickly, but in the world of BOYSTOWN as it has been written by this author, things move fast and time can be pretty fleeting for these characters. So I can’t blame them for grabbing hold of their attractions as they come and hoping for something deeper.

Something momentous does come about in this book, though. The Mancini family and the Ciancio family have been big rivals since the beginning of this series. After the events at the beginning of this book, we are finally seeing peace and unification. Derek Mancini who has always been so stubborn about the family feud has even crossed over into wanting peace. After 12 seasons that expanded over 30 years, it is so nice to see everyone on board with this peaceful merger in both business, and family dynamics.

Wait, did I say everyone? Things might be changing, but this is still BOYSTOWN where some jealous fiend lurks around some corner. Jasper Ahmed is a villain who joined the cast in season ten, who has a vendetta against both families. He’d like to see them burn rather than unite. Hope Ciancio, whose father was a total villain, but was raised by the ex-wife of a Mancini and a police chief has taken the Kylo Ren route. She looks up to her murderous relative and hates this new peace between the families.

By the end of this book, I felt a lot of promise. I was also very thankful my favorite character from this series managed to make it through to the end. It was my one request of the author. As far as a cut and dried finale ending, it wasn’t. I can imagine the outcome in two different ways. I am hoping for the best ending, but I am left just a little unsatisfied by not knowing for sure. I know the author did this on purpose, in case he wants to revisit, so here I am, hoping that he will so my curiosity will eventually be satisfied. Luckily, I have lots of patience. In the meantime, I will look forward to what Jake Biondi puts out next.

I guess I am a little bit sad for now, knowing that there won’t be any new books featuring these memorable characters at least for a little while, but I have really enjoyed the drama filled ride. Since I did listen to the audiobook version of this story, I want to mention Cameron Moyer, who did a good job at bringing the story to life especially with so many characters and plot lines.

Jake Biondi began BOYSTOWN in June of 2013 as an online story and intended to release one “episode” online per month, each ending in a cliffhanger. The story became so popular — and the online reading audience grew so quickly — that people from all over the country began to email him demanding to know what happened to their favorite characters and wanting the episodes to be released faster. They also had suggestions for future storylines. Excited by and grateful for his readers’ responses to BOYSTOWN, Biondi began to write and release installments more quickly.

In November of 2013, Biondi moved BOYSTOWN offline and published the first ten installments in book form as BOYSTOWN Season One. The book became an international hit, with fans all over the globe clamoring for more. Since then, Biondi has released nine additional BOYSTOWN series books.

In 2019, Biondi introduced his thrilling MAJESTY series, a period drama about the royal Chamberlain family. Like BOYSTOWN, MAJESTY has been embraced by fans who love action-packed twists and turns as well as a touch of romance.