Erryn reviews ‘Elysium (Fire and Brimstone Scroll Book 6)’ by Nikole Knight. This book was released  on December 21, 2020 and is 296 pgs long. The audiobook version of this story was released June 23, 2022 narrated by Kirt Graves and is 10 hrs and 53 mins. A copy was provided in exchange for an honest review.

Why I read this book: I’m addicted to this series. 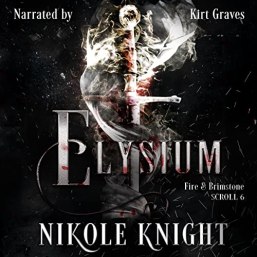 Riley and his angels have finally found their Elysium, and together, they will defend it.

After enduring two months in Purgatory at the Seven’s mercy, Riley Shepard emerges alive but forever altered. To protect his angels, he must embrace the powerful darkness inside him, or risk the fate of the realms.

The universe trembles under the feet of Hell’s armies, and it is time for Riley and his angels to fight. They fight for honor and justice, for freedom and family. But most of all, they fight for love. For in the end of all things, it is love that will save them.

“Violence, gore, and death.”  Oh, and “aftermath of trauma”.  Yeah, those trigger warnings very accurately sum up this epic end to a series I’ve enjoyed tremendously.  As I’ve journeyed with Riley, Gideon, Jai, and Noel, I’ve learned a few things.  I’ve learned that bonds can transcend journeys into Hell.  I’ve learned that different kinds of relationships can mean different things. I’ve learned what one is willing to sacrifice for those he loves. And I’ve learned to never fall in love with a secondary character because they might come to a horrific end.

That ending was inevitable as the final battle took place.  Good vs evil.  The Gods against the inhabitants of Hell.  A battle that needed to happen for order and balance to be restored.

I’ve enjoyed these books – dark themes and all.  Watching Riley mature has been an interesting process.  Seeing certain bad people get their comeuppance was weirdly satisfying.  Seeing the four men come together and form a relationship was touching.

I have to toss in that my love for the series increased with the skilled narration of Kirt Graves – he just did an amazing job and I’m so glad he helmed the books.

Nikole Knight is a born and bred Hoosier living in a top-secret location in Europe. She’s the lone female in the house, unless you count the dog, and she writes love in all its forms. When she’s not racing after a half-naked toddler or arguing with a child’s logic, Nikole can be found in her writing nook, typing away as her fingers turn to nubs.