Why I read this book: I loved the book 1. 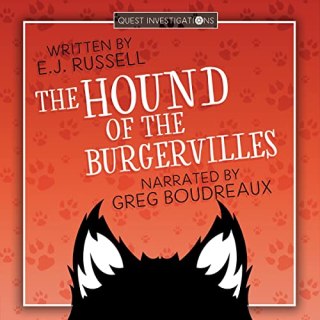 This case is really going to the dogs….

After I try a little off-the-books interrogation to locate my selkie almost-boyfriend’s nearly-ex-husband (don’t ask, it’s complicated), I’m in the doghouse again with my bosses, who bust me back to surveillance. Ugh. So when another human inexplicably storms into Quest Investigations—something our security spells ought to prevent since I’m supposed to be the only human admitted to our offices—I’m reduced to staking out local fast food restaurants to check out the guy’s alleged sighting of a giant, glowing-eyed, dumpster-diving spectral hound.

Ridiculous, right? Humiliating, too, not to mention boring. But at least they didn’t fire me.

Imagine my surprise when there actually is a giant, glowing-eyed, dumpster-diving spectral hound—one of the Cwn Annwn, Herne the Hunter’s traitor-tracking dog pack, to be exact. Jeez, who let this dog out? It’s my case, though, so it’s up to me—Matt Steinitz, aka Hugh Mann—to return him to Faerie. But while Herne’s normally hopping kennels are inexplicably unpopulated by pups, they’re playing host to one extremely dead body.

Uh oh. Looks like someone’s bite was a lot worse than their bark.

Guess my love life will have to take a back seat again while we nose out the truth.

The Hound of the Burgervilles is the second in the Quest Investigations M/M mystery series, a spinoff of E.J. Russell’s Mythmatched paranormal rom-com story world. It contains no sex or violence, and although there is a romantic subplot, it is not a romance. The series is best listened to in order.

Matt’s up to trouble again – quelle surprise.  I love this series, centering around the paranormal Quest Investigations.  Matt’s the only human in the mix and with his trusty werewolf companion and dryad friend, is getting into all kinds of mischief again.  He starts out by trying to track down the man he loves who is tracking his ex-husband (long story) but things fall off the rails and Matt’s back on surveillance.

Just in time, a case walks in the door.  There’s a huge dog hanging around the back of the Burgerville restaurants trying to grab food.  Not just a normal dog, though.  The human reporting this beast knows there’s something off, but it’s up to Matt to figure out what.

This story has all the elements of the paranormal that I’ve come to expect, a good mystery, and many of my favorite characters.  Oh, and Jordan.  Gotta love Jordan.

Greg Boudreaux does a great job of narrating these stories and I can see there’s another one, so hopefully it comes out soon.

She’s married to Curmudgeonly Husband, a man who cares even less about sports than she does. Luckily, C.H. also loves to cook, or all three of their children (Lovely Daughter and Darling Sons A and

would have survived on nothing but Cheerios, beef jerky, and Satsuma mandarins (the extent of E.J.’s culinary skill set).

E.J. lives in rural Oregon, enjoys visits from her wonderful adult children, and indulges in good books, red wine, and the occasional hyperbole.