Why I read it: After reading Hell For A Company (Brimstone #1) I had to take this one too because I wanted to know how things would progress between Shax and his angel. Thank you Angel Martinez for another enjoyable story.

An ebook copy of this book was offered to RGR in exchange for an honest review. 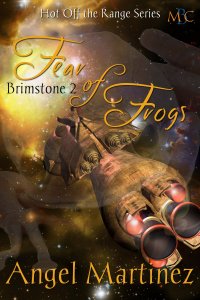 While Shax recovers from a near fatality, his shipmates have been busy. He’s rather proud of them taking the initiative and finding them a lucrative cargo run. His pride turns to outright horror, though, when he finds out what sort of cargo. Unfortunately, he’ll soon discover that a healthy fear of frogs doesn’t prevent frog-driven disasters. Time travel has never been so messy.

The story starts were the first ended. Shax recovers from a near lethal injury and the other two…well Ness and Ver kind of formed a truce and took on a new assignment, namely delivering frogs and a black generator to a university.

Oh my, alone the first few pages had me laughing so hard. The antics of Shax and Ver were hilarious and Shax reaction to meeting the frogs – priceless. Of course it couldn´t have been just an easy job done – were would be the fun of it ;). So the transport of the frogs ends in disaster and the three of them cluless about what happend. It takes some time before they figure out what went wrong.

“Yes, cupcake. It seems so. Welcome to the glory and terror of time travel. If you´ll excuse me, I think I may pass out now.”

Two demons and one angel find themselves in the late 18th century. They lands on earth in the middle of nowhere surrounded by cowboys; yee-haw!! Not going to tell you how they managed to disguise themselves but you can prepare yourself for some adventure as well as insight to all three characters.

I liked it that the story was told from various points of view. Don´t get me wrong Shax´s voice is very entertaining but you also have the chance to learn more about Ver and how he ticks. He grew on me a lot and I wished him a lover like Shax found in Ness. Only so much, he is not going back to the ship alone :D.

Shax and Ness as a couple are so good. I loved the intimate moments, yeah the first one cracked me up, actually. Ness is sweet, sometimes naïve and possessive of Shax. He also learns some new sides of his personality too. Those lead to an new angle in their relationship. They stumble quite accidentally about it but it was yummy; give me more please worthy :).

This story is well written, with witty dialogues, which made me laugh so hard. It also has great, likeable characters in it. I really hope that was not the last time in the company of that crazy bunch.