We are excited to welcome Aeryn Jaden on Rainbow Gold Reviews. On February 7th,  her new book A Valentine Surprise: Big, Bad Dragon will be released and this spotlight will give you a little taste of what you can expect. To celebrate, the author has not just brought several awesome teasers and excerpts for you today (including a steamy adult excerpt), but she also brought a juicy giveaway prize for one lucky commenter on this post. Further giveaway details below. 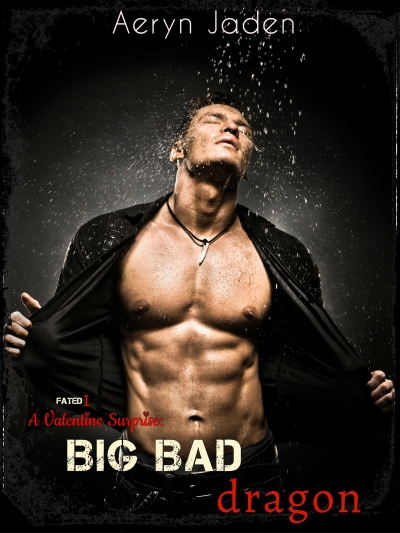 What if you suddenly found yourself in a Dragon’s Lair? What would you do? Mmmm. Enjoy it, of course. Especially when the dragon is so yummy!

Ryuu had spend his life having to explain why he likes dressing in woman’s clothes and resenting that he was different. Travelling the country with his boyfriend and working as a drag queen entertainer had been fun. Until it got old. The moving around and the boyfriend. Finding a new stable job in Boston is a godsend. He doesn’t know yet just how true that statement is.

Troy lives in his caves. He hardly goes out, unless his somewhat friend, Hermes, makes him. Yes, that Hermes. And Troy’s that old. And weary. He’s a naga dragon and has no time or patience for humans’ bullshit. Then he hits a human with his car and takes him home to heal. His life will never be the same.

Will the stubborn dragon realize in time what treasure he had stumbled upon, with a bit of friendly help? The sex is great but is that the only thing that is special about Ryuu? Even if he does open his eyes in time , Ryuu may not survive the sudden immerse in a world where dragons are venomous snake-like hunky guys and mythological gods own clubs. Especially if you mix in all the craziness an impulsive competitive brother and a scary as hell future mother-in-law.

You need to be 18 years or older to paticipate in this giveaway. Void where prohibited. Etc.

Snowing? No. The sky was falling in the shape of microscopic symmetrical crystalline ice structures. It was beautiful, if you weren’t freezing your ass off. Ryuu felt as if he was another of those ice formations, just ambling along with the gusts of wind eerily blowing down the deserted streets. The snow was quickly piling. The only reason Ryuu’s body could still shiver and be cold opposed to already transformed to ice was the bus driver taking pity on him and giving him his old sweatshirt. ‘Frozen’ seemed to be the theme for this particular night. The streets were frozen in silence, no human in sight. The poles were frozen over, he was turning into ice and even sound seemed to have stilled all around him. Taxis weren’t working, if there were any in the quaint little town, and his boyfriend of three years wasn’t answering the phone. Ryuu was screwed in a very unpleasant way. Good thing he wasn’t the type to linger on the unpleasantness of life.

He stopped in the middle of the road, snow scattered on his hair and shoulders, making him feel buried alive in the stuff. It continued to pile everywhere, so much so Ryuu could no longer see where the sidewalk ended and the street began. Not that it mattered. He seemed to be the only one crazy enough to be out in this weather. The good part was that the snow was making him feel a bit warmer; he wasn’t shivering so hard anymore. He turned around, looking to see any lights on and maybe get some help. He had heard people in small towns usually were kinder and he hoped someone would take pity on him and not let him freeze to death. It all looked the same and now he didn’t know which direction he had come from. There had been a light on, near the bus stop. Which way had been the bus stop?

So pretty. The snow was coming down harder and it was even more difficult to see. Ryuu stopped completely and turned his face up, watching the ice falling down to earth, the streetlamps’ glow making the particles shine like diamonds. Sticking his tongue out, he chased the big ones, remembering when his parents had let him and Rei play in the snow. He hadn’t thought about that in a very long time. He did now, and it didn’t hurt as it used to. Maybe it was because of nature’s magic. Ryuu could feel it was a special night, though his childhood stories about special nights involved a lot of scary Japanese legends. Ryuu had never believed those. Even if spirits did come out to play some nights, they’d not be as evil and mangled as those stories made them. Magic was too beautiful to be evil. Or, maybe, Ryuu was purely delusional and currently freezing to death in a whiteout.

His eyes blinded by a sudden flash, he froze in place, certain something was about to happen. It was, after all, a special night like that.

He was right. The car sped towards him and skidded on a patch of black ice hidden by the new layer of snow. Fortunately, the hit wasn’t direct. Ryuu’s eyes blinked unseeing, the noise clamouring in his head too much to make sense of anything. He soon found out what was happening when a hard object pushed him up and threw him in the air to land some three feet away from where he had been standing frozen, like a deer in the headlights, in the middle of the road. Luckily, the snow had piled up enough to build snowdrifts right around where Ryuu landed after his short and sudden flight.

“You almost broke my present.”

“Shut up, Hermes. You’re not to speak to me for the next century or so.”

“Are you an idiot? I could’ve killed him! And you don’t ‘gift’ human beings!”

The enraged shout penetrated the void enveloping Ryuu’s mind and he felt his leg move as if during sleep.

“Go away. Talking with you is like hitting my head against a brick wall.”

“Um? Painful and stupid? Hey! I resent that!”

Ryuu groaned at the jarring shout and tried to open his eyes. Not working yet, it seemed.

“I sure hope so. I never killed a human that didn’t deserve it. But, then again, I’m not sure he doesn’t, considering he was stupid enough to sit in the middle of the street and not duck a truck.”

“He’s human and it’s snowing pretty hard. He may be “weather afflicted” or something. You know how strange and fragile they are.”

“He’s also awake and listening to all we’re saying.”

“Not yet, not without me. Now, spread them.”

He moans and complies. The change comes with the added bonus of feeling Troy’s hardness press down on his swollen dick and this time he does almost come from the friction. Letting the rest of his weight down, Troy starts to slowly circle his hips and push down.

Um. Okay. But, then again, the guy has the technique to make Ryuu scream it, so…still. Trojan? He starts to laugh uncontrollably and sadly all movement in the southern hemisphere comes to a halt.

“Why are you laughing?”

“Okay.” Ryuu takes a calming breath, by now wanting nothing more than to beat his own ass for interrupting their session of heavy petting.

“Your name. Trojan? It seemed funny. Especially when you wanted me to scream it instead of god.” He snorts again, then gives up and lets loose another bout of laughter.

“Don’t get me wrong. You’re a terrific guy, really nice from what I’ve seen so far. And really nice to look at. You also seem to have the moves to back up all that “modest” ego you got going there but, really, dude? And Trojan? What were your parents smoking when they named you Trojan and your brother Python? Or thinking off? Condoms and sex toys?”

Troy’s face is an interesting study of mixed emotions. For a moment, Ryuu fears he has gone too far, as he usually does when he lets his mouth get the better of him. Then the most miraculous thing of all night—well, almost morning by now—happens. More incredulous than almost freezing and being saved by a beefy macho man who proves to be a gentle giant in disguise—with few words to speak but louder actions. More than having that same guy respond to Ryuu’s stupid impulse of kissing his sensual lips which have been driving him crazy from first sight. Troy doesn’t get offended by his bad-timed sense of humour. Nope. The guy’s aquamarine eyes slowly light up as his, reddened from their kisses, lips quirk up and slowly two twin dimples make their appearance on the chiselled cheeks. Ryuu feels faint and weak in the knees. Luckily, he’s still on the table. Under Troy.

“You’re a peculiar human. Damn be Hermes and his plans!”

The ‘peculiar human’ doesn’t get the change to wonder about that as Troy gets right back to it, starting, of course, with Ryuu’s sensitive neck. His hips begin their gyratory move again, the friction harsher than before but still not enough. He opens his mouth to suggest they get some of their clothes out of the way but it proves unnecessary when a cool hand travels up his abdomen and pinches harshly on his pebbled right nipple. Another, slightly cold, hand makes short work of Ryuu’s zipper and pulls him out. He moans and gasps for air.

“Not laughing anymore, are you? Ready to scream my name yet?”

Troy doesn’t even mind the muffled laugh, it only adds to the vibrations traveling up his cock to settle in his ball sack. Ryuu’s back arches off the table, pushing his dick further in Troy’s peculiarly cool mouth. The contrast between that chilliness and the way Ryuu’s skin is practically boiling, makes Ryuu trash and whimper. He needs…he wants…

Troy leaves his dick pulsing and Ryuu growling with frustration.

“Hmm, I think I like the taste of you. Maybe I’ll think about keeping you for a while.”

The guy could still talk? Ryuu wasn’t having that! He pulled Troy up by his ears, more because he surprises the guy than overpower him. Feeling all parts align nicely, he gets his hands down and dirty. Oh, yeah! That’s the sound he wants to hear.

You can check some of my other books here: Amazon US | Amazon UK | Bookstrand

Aeryn Jaden loves to read. Loves it so much that some days she doesn’t know what reality is anymore. Her friends and family usually have to yell a bit and remind her. Must be why she’s twenty eight and still searching for a special person of her own. The second best thing in the world for Aeryn is writing. Writing keeps her relatively sane and clears the voices in her head clamouring for her attention (meaning the characters’ voices, she’s not that crazy to randomly hear voices! Yet.). She was born in Romania but cannot stay put. One year you’ll find her in England, the next in Greece or Belgium. Who knows where her restless feet will carry her next… One thing remains constant and that is her totally healthy Internet addiction. So you can find her on Facebook or better yet at her Website and/ or Blog.

She’ll love to hear from you, so please stop by!