Thoughts on the cover:  The blurb for this story could have been the most unappealing blurb in the history of the world and I still would have purchased the book, if only to drool over the cover.  I am a fan of bondage in any form, but the beauty of the red ropes with the symbolic detective’s shield tucked in at the shoulder?  Perfection! 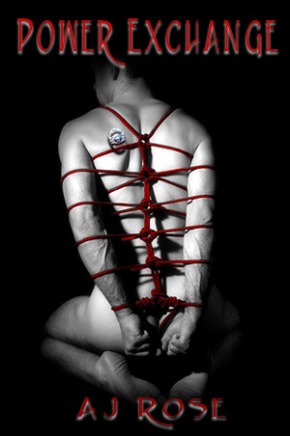 Enter Ben Haverson, a psychologist and a well known Dom. With Ben’s help as a consultant and attention to Gavin’s own murky truths, Gavin delves deeper than he ever thought he would into the world of restraints and paddles. Forced to scrutinize his true nature and his innermost desires, Gavin has a choice: keep the fear of submitting at bay, or dive in and solve the case with the knowledge he gains. When another victim is discovered, Gavin’s choice is made for him, and he’s pulled headlong into the deepest, most emotional journey of his life.

Unfortunately for him and Ben, a killer has noticed, has taken stock, and has set his sights on the D/s pair. Can Gavin outwit him, or will his first exchange of power be his last?

This book is well written with a lot of layers, a great mix of emotion, passion, action, and suspense.  This is Gavin’s story and it wouldn’t be what it was without his strong family ties.  Gavin is a detective from a family of law enforcement men; his father and his brothers are all involved in the field in one capacity or another.  When the reader is first introduced to him, it is particularly obvious that Gavin’s life has been a shaped by choices he made to please his family and live up to their expectations.  His career is the only choice he’s made that makes him happy, that fulfills an intrinsic need inside him to help others.  Content in his position as detective, this is the one area in his life where he has stayed strong and resisted any pressures from his family.  AJ Rose does an impressive job of communicating the family dynamics; as a reader, I was left with a strong understanding of how his upbringing shaped him into the person he is.

This is the perfect mix of family, action/suspense, kinky sexery (I know that isn’t a word but I think it should be) and love.  The storyline and relationships are all solidly developed and there is a great cast of characters in this story leaving you with a strong sense of community.  If I had one complaint it would be that there was a paragraph that revealed the murderer to the reader earlier in the story than I would have liked.  This left me yelling at Gavin and Myah to “wake up – the killer is right under your noses!!!”  Beyond that, this story was exactly what I had hoped it would be.