Tanja reviews ‘In The Absence From Monsters’ by J.P. Barnaby (Published by Wild City Press; January 24, 2014)

Why I read it: I stumbled upon this book a while back on another blog. It was the title which drew me to the book, so when the book was offered to RGR I claimed it immediately. Now m/m/f is not something I read, usually, but after I finished this book I have to say don’t let that fact deter you from reading this awesome book. 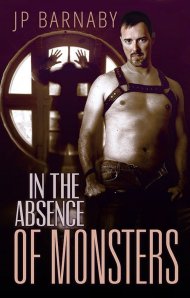 Jayden Carter knew the path he wanted his life to take. He wanted to get his Master’s Degree in History and teach. But when he answered an ad for a roommate and met mysterious doctor, Ethan Bryant, he’s brought into a world he never knew existed and his path changes.

It changes again for Jayden and he leaves Ethan with their friend, Lexi, in tow. Ethan loses himself in a haze of self-destruction and pain. With the help of a childhood friend, Gabriel, Ethan battles the demons of his childhood and finds a way to survive. Gabriel and Jayden wage an epic war for Ethan, but in the end, they may all end up losing.

Originally published as The Forbidden Room and A House of Cards: Deconstructing Ethan

J.P. Barnaby, what did you do with me? This was one of the best books I´ve ever read. It put me through an emotional wringer. Seriously I think there was not one emotion I didn´t have while reading it. I loved nearly every moment of this book ❤ . This story is told in two parts, first from Jayden´s than from Ethan´s point of view.

Jayden is a student and although his parents are rich he doesn´t want their money. He fights his way through life independently. He sometimes is selfish and jumps to conclusions instead of talking but overall he cares deeply for the persons he loves. So after reading an ad for a roommate, Jayden meets Ethan and his life got forever altered. He stumbles into a world he would have never imagined and found himself not only as a submissive for Ethan but also as third part of a purely sexually, no strings attached …*snort here 😉 * BSDM relationship with Ethan and Lexi. See Jayden is not gay and as his story progressed he asks himself now and again if he could probably feel more for Ethan than friendship. Since he is not gay that can´t be the case…or can it? It´s a long way he had to go.

So here I sat with my kindle and went with Jayden from his submissive training to being a Dom. I have to confess, the first time Ethan introduced Jayden to this world was…um I cringed, raved and ranted against Ethan…how dare he to behave this way…but it fit this story and Ethan´s reasons behind it got explained later on. Of course Jayden had some troubles with being a submissive, so it´s time to introduce Lexi. As I said before, I´m not fond of m/m/f and yeah some scenes with all three were not for me, I´m kind of weird because of the girlie parts but Lexi is such a great character you have to adore her. She is sweet, selfless but not perfect She is also a great supportive for Jayden. Something he suddenly didn´t find in his sister anymore, who behaved abdominally after she found out about Jayden’s new lifestyle. Yep they should have talked more but nonetheless her behaviour was awful. The things Jayden had to endure due to his sister nearly ripped me apart but the top of it was, as a family tragedy strikes which left me in tears and emotionally drained. It´s also the end of Jayden´s part in this book. After it, I had to put the book aside because I knew the second part had something similar in store for me. I just wanted to give it the attention it deserved, namely reading it in one sitting 🙂 .Did I regret putting it aside? Certainly not 🙂 since I couldn´t put it down after I started part two.

Maybe you wondered already why I didn´t introduce Ethan properly. He has his own part in this story so here it comes. Ethan is a doctor, not much talkative about himself, his past and he feels extremely unwell in the company of strangers. His life also got changed after meeting Jayden. After Lexi and Jayden left him, his world falls apart. After only one chapter in his story I was already going through so many emotions you seriously have to congratulate the author for it.

However Ethan is not the person who he seems to be, which was explained in part one, but now you can experience Ethan´s life through his eyes. And damn if he didn´t went through really bad things. This story had so many great quotes but this one stood out for me because it puts together what you can expect from part two.

Ethan Bryant isn´t a real person; he is a fictional character that I made up with to deal with the nightmare that was my life.

So who is Ethan Bryant really? Not going to tell but it´s so well written how Ethan falls apart and slowly puts himself not only back together but also learns to deal with his past. For this he needs Jayden and Lexi so he moved to them. Another emotional rollercoaster lays in store as you can move along with him and his past, present and future. After tragedy strikes yet again I would not have thought a HEA would be ever possible. While reading about this tragedy I cried loud out…no, no please don´t use this cliché to solve things, it´s not worthy of this book…but strangely, after reading on, I got satisfying answers and the world, was again, better for me. Sorry, don´t want to spoil things for you, but you´ll probably know what I´m talking about after you read the book 😀 . So when Jayden and Ethan finally got their HEA I took deep breathes, yes I was soo relieved but also happy for them. The road they had to take was not an easy one.

This is a story about love, life and loss. How to deal with all that and above all who you are and what you want from life. It´s a well written book has great characters and an awesome storyline. If you are going to read it, which I highly recommend you do, prepare yourself for an emotional rollercoaster.