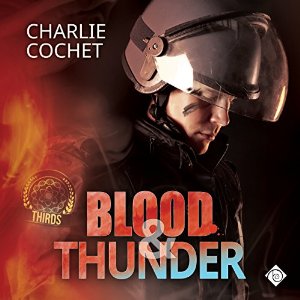 Why MtSnow listened:
Cliffhanger ending. Need I say more? I saw that this one was available in audio and having just finished the first one, and the way that it had ended (or not, as in WILD and crazy new developments) I HAD to get the next one in my hot little hands.

Why Bethany listened: After I finished book 1, I couldn’t get this one opened fast enough.

Blurb: When a series of bombs go off in a Therian youth center, injuring members of THIRDS Team Destructive Delta and causing a rift between agents Dexter J. Daley and Sloane Brodie, peace seems unattainable. Especially when a new and frightening group, the Order of Adrasteia, appears to always be a step ahead. With panic and intolerance spreading and streets becoming littered with the Order’s propaganda, hostility between Humans and Therians grows daily. Dex and Sloane, along with the rest of the team, are determined to take down the Order and restore peace, not to mention settle a personal score. But the deeper the team investigates the bombings, the more they believe there’s a more sinister motive than a desire to shed blood and spread chaos.

Discovering the frightful truth behind the Order’s intent forces Sloane to confront secrets from a past he thought he’d left behind for good, a past that could not only destroy him and his career, but also the reputation of the organization that made him all he is today. Now more than ever, Dex and Sloane need each other, and, along with trust, the strength of their bond will mean the difference between justice and all-out war.

Same narrator, and I gotta say, I was pulled in immediately. The story felt like a smooth transition from the previous. Fantastic listen. And some of the audio effects used really make this an engaging audio. Somehow some of the radio talk between the officers, the sound effects from newscast presentations, like a weird echoey effect, added to the realistic effect of listening in on OPs as they happened.

We end up starting this story right in the middle of action, and again, as in the first, I found the characters very engaging. We slowly get engrossed into more and more of these guys, feeling their personalities. Some of my favs are the unofficial pairings of Calvin and Hobbs (yeah, like that cute little kid and his bestie tiger friend) and Ash, Sloan’s First-Gen Therian-lion best friend and Cael, Dex’s computer-geek younger Therian GAY adopted brother. It’s cute how it seems as if Cael has a crush on the big, bad STRAIGHT lion-Therian, and how much Ash seems to HATE Dex, but he’s so sweet with Cael?! Hmmmm.

To understand the dynamics of the THIRDS teams, as far as teammates go, there is always a pairing of a human and a Therian, so someone is available to provide ‘after-care’ when Therians are most vulnerable, and weak, post shift. I thought this was a fascinating twist on symbiosis between shifters and humans.

This story had us hitting the ground running, chasing after the bad guy, or guys, and getting caught in traps that caught the THIRDS by surprise. I really enjoyed the slow unveiling of the mystery, and being on the edge of my seat for many chapters. I mean, what kind of bad guy goes after innocent children???

Be warned. ANOTHER cliffhanger ending! (Grabbed the next book immediately, could NOT wait for the audiobook. Nuh uh. No way.)

Anyway, as in the first. I could not recommend this book, as well as this series, highly enough. Oh. And there are definitely more sexy times. Mmm, mm. I love these guys *grins* 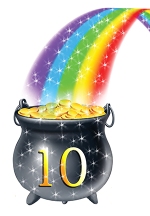 OMG after the last few minutes of book one, and a slight freak out of not being able to get book two to play, I dove right into Blood & Thunder.

When I first started I was a tad worried that I wouldn’t like it as much as the first one.  Or that because the first one was so fantastic that this one wouldn’t live up to it.  Boy I was wrong, if anything this one was better, hotter and filled with bigger drama.  Oh man Ms. Cochet is on a roll.  And the audio was just as good as book one.

We get to see more in depth with a lot of the characters from book one, which I really appreciated how the author does that.  It never felt like they were at a stand still, you get to see them react to certain situations that gives you insight to their feelings and fears.  And well some of the things we learn are just downright fun.

We also get to see the first hiccup that Dex and Sloan encounter, which left me wishing I could smack Sloan upside his head.  Then I got to thinking about it from his frame of mind and it left me wanting to hug him, while screaming at him to tell Dex how he feels.  The chemistry between these two just get hotter as their feelings for one another get deeper.  Sloan still battles all the time with the loss of his first partner and it takes its toll on Dex.  But our Dex is so patient with Sloan and wants nothing more than to make him happy, however Sloan will allow him to do that.

This was a perfect second book in an already fantastic series.  When I finished it I couldn’t wait to get my hands on book three.  If you have yet to read book one, do that now, like right NOW.  Then get this one cause I can promise you after reading one, then two, you will be hooked and begging for more.  Well done Ms. Cochet, well done.  I look forward to the rest of the series.

M/M Romance author by day, artist by night, Charlie Cochet is quick to succumb to the whispers of her wayward muse. From Historical to Fantasy, Contemporary to Science Fiction, no star is out of reach when following her passion. From hardboiled detectives and society gentleman, to angels and elves, there’s bound to be plenty of mischief for her heroes to find themselves in, and plenty of romance, too!


Our review for book one & three here: