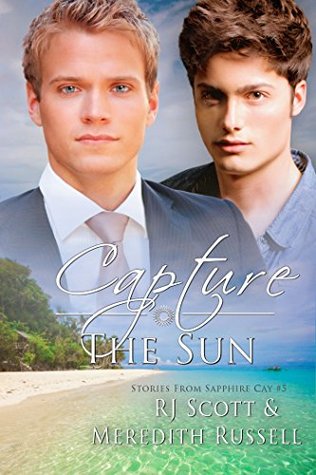 Model, Isaac Bailey wants to break into the world of fashion design. Under his father’s company name, he is set to debut his new collection—summer wear. He has the models, the clothes, what he needs is a location.

Mitch Stone is a trouble shooter. His latest client needs an exotic location and he happens to know someone with the very thing—Sapphire Cay. Having underestimated Isaac as nothing more than an airhead model, Mitch soon discovers there is much more to the young man than he first thought.

As the fashion shoot gets underway, Mitch has to contend with his feelings for his old love, Dylan, and the very new and growing affections he has for Isaac. What starts as just another job, turns out to be more fruitful and exhilarating than winning any multi-million dollar contract.

Why I read this: The blurb sounded cute and the book had high reviews already.

If you enjoy insta-obsession followed by insta-love, this book is for you!  Isaac Bailey is a former model now turned fashion designer, and one night while he attends a party he meets Mitch Stone.  Isaac doesn’t know anything about Mitch, and in fact when they are first introduced Mitch turns Isaac away.  But later on that night, Mitch changes his mind and Isaac and Mitch spend a very enthusiastic night together.  Once morning comes, Mitch – despite liking Isaac in bed (they didn’t speak all night so he couldn’t have loved him for his mind, lol) – decides he won’t pursue spending more time with the other man.

What Isaac doesn’t know if that for his upcoming photo shoot to advertise his clothing designs, Mitch is going to play troubleshooter and they are stuck on an island together where passion explodes.  As I said before, this is an insta-love story which I personally didn’t understand because the characters didn’t spend nearly enough time together to really know each other.  They let their hormones do the thinking for them.

The writing itself was fine, but the story and character development was not for me. But, I do know this type of story appeals to other readers and for that I say go for it.  The characters were sweet and I didn’t hate seeing these guys get their HEA; we all want one of those. 😀 On the good side, there wasn’t drama for drama sake. I was waiting for the MCs to have a big misunderstanding at the end which would cause them to yell and break up but then have a magical reunion. Thankfully that didn’t happen.  And for that reason I can give this 6 pots.

Meredith Russell lives in the heart of England. An avid fan of many story genres, she enjoys nothing less than a happy ending. She believes in heroes and romance and strives to reflect this in her writing. Sharing her imagination and passion for stories and characters is a dream Meredith is excited to turn into reality.

You can find my blog on cover art, including information and portfolio here: http://meredithrussellart.blogspot.co.uk

RJ Scott
RJ’s goal is to write stories with a heart of romance, a troubled road to reach happiness, and most importantly, that hint of a happily ever after.

RJ is the author of the over one hundred novels and discovered romance in books at a very young age. She realized that if there wasn’t romance on the page, she could create it in her head, and is a lifelong writer.

She lives and works out of her home in the beautiful English countryside, spends her spare time reading, watching films, and enjoying time with her family.

The last time she had a week’s break from writing she didn’t like it one little bit and has yet to meet a bottle of wine she couldn’t defeat.