Erryn reviews Howling on Hold (Mythmatched Book 1) by E.J. Russell. The ebook was released January 13, 2020 and is 254 pages. The audiobook was narrated by Greg Boudreaux.  It was released March 13, 2020 is 8hrs and 2min. A copy was provided in exchange for an honest review.

Why I read this book: I loved the Fae out of Water series. 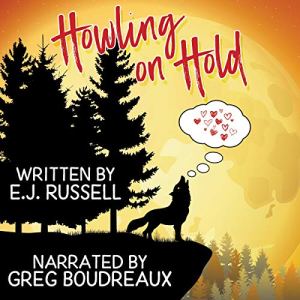 That’s why werewolves embark on a Howling: a three-year rite of passage in which they’re sent to a group residence to wrestle with their wolfy instincts and assimilate into the Wider World. But Tanner Araya’s Howling is almost over, and he could be called back to his remote pack at any moment. His 21st birthday might be his last chance to act on his strongest instinct and finally kiss Chase Denney.

Chase is RA at the Howling residence affectionately dubbed “the Doghouse”, and he takes his job seriously. So seriously that when he realized he was developing feelings for a resident, he forced himself to keep Tanner at a distance. But now that Tanner’s 21, he’s not Chase’s charge any longer. They could be friends or – if Chase is lucky – something more. At least until they both return to their home packs for good, as tradition demands.

It would take a miracle for them to get together – especially when the other Doghouse werewolves insist on “helping”.

Warning: Many frisbees are harmed in this story, forgiveness is not always easier than permission, and the five-second rule does not apply.

Chase’s job as an RA at the dog house is to oversee the teenagers into their maturation during their howling.  Simple enough, right?  And he’s good at his job.  He takes it seriously.  He monitors Hector’s pizza intake.  He scolds Jordan’s propensity for destroying frisbees.  And he’s watched Tanner mature into a bright and beautiful young man who is fascinated with werewolf lore.  Who wants to be more than just a manual laborer back in his family’s compound.  Tanner yearns to study, yet his familial obligation weighs heavy.

The night of his 21st, things come to a head. Tanner and Chase are separated, and it looks pretty grim for the romance that never got started.  Have no fear, they do reunite and fight against malevolent forces – with the help of many of the characters from the author’s Fae out of Water series – including Mal, Alan, and Hamish the kangaroo shifter. Throw in a vampire, a bear shifter and…well, you get the picture.  An epic battle. And, of course, the other members of the dog house are along for the ride of chaos and mayhem.

I truly enjoyed this book.  As much as I rooted for Tanner and Chase, Jordan stole the show.  I’m waiting for him to get his own book.  I can’t wait to see who can tame and at the same time nurture that enthusiasm.

Kudos to Greg Boudreaux who did a lovely job narrating the book.  Can’t wait for the next one.

She’s married to Curmudgeonly Husband, a man who cares even less about sports than she does. Luckily, C.H. also loves to cook, or all three of their children (Lovely Daughter and Darling Sons A and

would have survived on nothing but Cheerios, beef jerky, and Satsuma mandarins (the extent of E.J.’s culinary skill set).

E.J. lives in rural Oregon, enjoys visits from her wonderful adult children, and indulges in good books, red wine, and the occasional hyperbole.