Why I read this book:  This was in our emails for review, and I am a HUGE Cardeno fan.  This review originally should have been posted sometime last week as a part of Different Publishers week, but since today is release day I decided to hold off by a day.

NOTE:  We were provided a copy of this in exchange for an honest review. 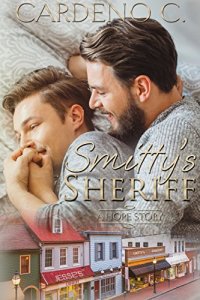 Todd is too flakey. Richard is too stubborn. Together, they’re perfect. A May-December couple get a second chance at love.

Retired soldier Richard Davis wants a stable life in a quiet town with a forever man. Becoming the sheriff of Hope, Arizona, accomplishes two of his three goals, but instead of finding a serious partner, he falls for too-young-to-be-committed and too-flakey-to-be-serious Todd Smitty. Richard won’t find the right man if he’s obsessed with the wrong one, so he walks away from Todd.

It’s lust at first sight when Todd meets his sister’s army friend. He sets his sights on the worldly, strong, stable older man, and the more time he spends with Richard, the harder he falls. But after three years together, Richard cuts off all contact with no explanation.

When a mutual obligation requires Todd to move into Richard’s house, he’s thrilled at the opportunity to earn a second chance. Ignoring Todd from across town was hard enough. Can Richard resist temptation under his own roof?

There is no denying how much I love this authors work, and this one was no different.  This one is on the shorter side so I am afraid this review will be on the short side, only because I hate to give anything away.

What I really liked about this one is you basically start in the middle of Richard and Todd’s relationship, or I guess I should say lack of relationship.  You see Richard is quite a bit older than Todd and when they were together before, RIchard never thought Todd was capable of being in a committed relationship.  Just a little over 20 when they first got together Richard figured it was just a phase for Todd, that he would soon be board of someone so much older and more wanting to sow his wild oats.  So he does what he thinks is the best for both of them in the long run, and he ends it.

But you see Todd doesn’t understand why, he thought things were good between them.  So he assumes it mush be him, that he isn’t smart enough, or good enough for someone like Richard.  Oh he still loves him, and would do anything to be with him again, and he did a lot to win him back after Richard called things off.  So when Todd’s sister, and Richard’s best friend, has to leave for a few months she leaves her daughter with both of them.  Forcing them to basically co-parent.

I really loved watching these two rediscover why they worked so well when they were a couple and also figuring out what came between them in the first place.  I loved these two so much, Richard likes being in control and Todd thrives on that.  Even though this book is on the shorter side and I finished in one sitting, it is one of those that I know I will be re-reading many times, like when I need a hug.  Just like most all of Cardeno’s books this is one I definitely recommend if you want something sweet, hot in that alpha male “just do what I say cause I know what is best for you” way.  You won’t regret it.

Cardeno C.—CC to friends—is a hopeless romantic who wants to add a lot of happiness and a few awwws into a reader’s day. Writing is a nice break from real life as a corporate type and volunteer work with gay rights organizations. Cardeno’s stories range from sweet to intense, contemporary to paranormal, long to short, but they always include strong relationships and walks into the happily-ever-after sunset.